As last week’s GDP data came in better than expected, several top economists said they don’t expect the engine to run at high RPMs for the rest of the year. Still, it was notable. And when coupled with retail sales (up 1.6 percent in March) and consumer confidence (up in North America, according to the Conference Board), the overall picture is bright for the retail industry.

Or is it? The 35-day government shutdown that ended in late January exposed a vulnerability of U.S. consumers: About 80 percent of all U.S. families, which includes minimum wage earners to those classified as upper middle class, are living paycheck to paycheck — meaning they don’t have enough savings to pay bills, their rent or buy food. This data is based on a 2017 survey by CareerBuilder, and later backed up with additional, more recent data from Bankrate and the Federal Reserve.

During the shutdown, Wilbur Ross, U.S. secretary of commerce, suggested government workers get personal loans to help make ends meet while other policymakers told them to take on second jobs. 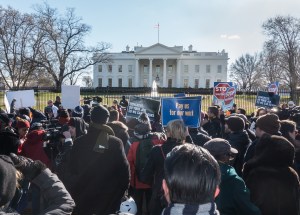 Due to a variety of factors, today’s consumers are simply cash-strapped and saddled with debt. And while politicians have used “income inequality” as a rallying cry to stir up support for taxing the rich and big corporations, the unfortunate truth, say some financial advisers, is that today’s consumers are simply living beyond their means while other experts assert that the problem is much larger and more complex.

Today’s average shopper faces rising credit card debt, lower savings and stagnant wages. Yet they continue to spend. For example, families are typically doling out between $1,200 to $2,500 a month for multiple loans on expensive SUVs. They’re eating out more instead of cooking at home, which is less expensive. “Food away from home” garners 4.5 percent of total household spending, and is up 4.2 percent year over year, according to data from the Bureau of Labor Statistics.

Consumers, especially Millennials, also have high student loan debt, which is described as a “good debt” by financial advisers versus a bad debt — such as credit cards — since it bolsters one’s earnings potential. But overall, total debt loads — and personal liquidity — are under pressure. Through various marketing tactics that leverage the power of AI and machine learning, shoppers are lured into impulse purchases, and hard to pass up deals seemingly tailored for their needs. For many consumers, these “personalized shopping experiences” are purchases done with credit cards. Many consumers also load up their credit cards with automatically deducted subscriptions for various goods and services — everything from iTunes and Netflix to Birchbox and Blue Apron.

As a result, the amount of total credit card debt has soared in the U.S. to remarkable levels. According to data from the NerdWallet, credit card balances, month to month, rose 5 percent by the end of 2018 to $420.2 billion. Total debt, which includes mortgages, auto loans and student loans as well as credit card debt, stands at $13.5 trillion. Mortgages alone account for more than $9 trillion of that total amount.

With credit cards, interest rates can bury borrowers. “Credit card interest is costly,” NerdWallet researchers said in a recent report. “Households with revolving credit card debt will pay an average of $1,141 in interest this year.”

Emmalyn Shaw, managing partner at Flourish, a venture capital firm that focuses investments on companies “promoting financial health in the U.S.,” told WWD. “We live in an era of unprecedented wealth but unequal opportunities. The majority of U.S. households are not financially healthy, often living from paycheck-to-paycheck and struggling to make ends meet. Forty percent of the country’s adults, if faced with an unexpected expense of $400, would either not be able to cover it or would cover it by selling something or borrowing money.”

Shaw noted that household debt is at an all-time high. “This dire scenario can make life’s common setbacks  —  an unforeseen car repair, a health emergency, or a job loss  —  lead to catastrophic financial consequences,” she explained. “And this is not a lower-income person’s problem. This picture captures the majority of our country’s middle class.”

One notable factor is the evolving nature of work itself. Shaw described the U.S. workforce as “undergoing a profound transformation.”

“Private sector jobs are shifting from traditional W-2 arrangements to flexible 1099 contracting, creating income volatility and taking away employer-sponsored safety nets,” Shaw told WWD. “While the 1099 shift offers workers increased flexibility and autonomy, it also generates significant financial uncertainty and anxiety. Unpredictable work schedules and wages make it difficult for people to budget, plan for emergencies and save for the future. Fragmented income sources and complex payroll and tax obligations often exacerbate the time and stress of managing cash flows.”

In related news earlier this week, the U.S. Department of Labor released a statement in response to a question from an unidentified “gig economy” firm asking how to classify certain workers. The department said gig-economy workers such as those who work for Uber and Lyft, are classified as employees but as “independent contractors.”

For traditional financial planners, better management of finances is key as is being more disciplined about spending. John Essigman, a financial adviser at John Essigman Wealth Advisors, told WWD that families are having a hard time “as we have lost the art of saving, living within our means and thrift.”

“Go back in time and families had one used car, no dishwasher, no clothes dryer, no cell phone, we called distant relatives on Sunday afternoons when rates were the lowest, three free channels on TV, children worked and often contributed to the household, we cooked all of our meals, all leftovers were consumed, rarely went on vacation, and we lived in a small house,” Essigman said. “We did not use credit cards, we paid for higher education costs out-of-pocket, and going to the drive-in movies consisted of bologna sandwiches wrapped in wax paper, Little Debbie snacks and Kool-Aid.” 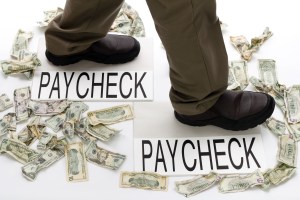 “We refinance our homes to pay down credit cards thus turning our house into an ATM,” he said adding that he doesn’t believe that “this can be managed or controlled by policymakers.”

“These are personal habits formed from early childhood,” Essigman explained. “Financial education would certainly help. The process in and of itself is not complex, [but] the discipline required can be very painful. I also do not believe that we can restore the middle class. World economic equilibrium is eroding our standard of living as jobs and wealth are being shifted from the U.S. and benefiting other countries.”

Rosemary Frank, a financial adviser at Rosemary Frank Financial LLC, said consumers who are stretched thin is the result of “their financial illiteracy combined with conspicuous consumption.”

“They are living beyond their means because they never understood that their ‘means’ are actually something less than their paycheck,” Frank explained. “If they had spent less and saved more, as an emergency fund, retirement savings, etc., they would not be living paycheck to paycheck. Also, if they saved for major purchases and avoided carrying credit card balances, they would be retaining all the funds that are lost to interest payments.”

These behavior patterns are hard to break, financial experts said, and for Frank, consumers find it difficult to say no to unnecessary purchases. “A lot of good people are doing really bad things with their money, either because they simply do not know any better, or they succumb to immediate gratification at the expense of long-term financial stability, Frank said. “Maybe we need to have forced savings in addition to payroll deductions for retirement plans. And not allow people to cash out retirement funds prematurely. Saving ‘for retirement’ does no good if they blow it before retirement. That is no savings at all.”

In some ways, consumer behavior in regard to finances is changing. Shoppers are being forced to adopt more frugal ways. Even consumers “with money” are approaching spending more prudently. As ThredUp recently noted, the resale market continues to flourish. Shoppers are turning to re-commerce sites to buy fashion apparel. Bargain-hunting is a desirable lifestyle.

And with Millennials, use of credit cards is shunned, which is why they’re seeking out alternative payment options from providers such as Alipay and Klarna. With Klarna, consumers can pay in installments, over time. And it’s proving to be popular. In its annual report this past week, Klarna said there was a 36 percent gain in sales volumes for its platform to $29 billion.

“Klarna’s offering continues to resonate with consumers, merchants and partners across all markets as demand grows steadily,” the company told investors. “Klarna is now partnering with over 130,000 merchants across verticals, with over 25,000 newly added in 2018 and existing partnerships both deepening and expanding across markets. There is now an average of 1 million transactions a day running on the platform.”

Klarna also noted that the consumer base “continues to grow rapidly; Klarna welcomed almost 26 million new consumers during the last year, but most importantly, they are highly engaged as preference and loyalty builds, with many markets seeing an average of more than 70 percent of consumers make multiple repeat transactions.”

From here, it’s unclear how the economy will fare. What is clear is that consumer debt is massive, but there are options available for shoppers looking to change their habits.