An emerging sect of new and evolving consumers headed for the outdoors are spiking sales in backcountry equipment.

A trio of Nordic skiers. Image courtesy of Craft Sportswear.

Emerging and evolving consumers are shifting winds in the backcountry market, according to the NPD Group — and, as a result, the outdoor industry is seeing explosive and categorically transformative growth.

Backcountry-related equipment sales in the U.S. grew a combined 76 percent in the opening months of the 2020 snow season, which runs from August through October, compared to the same period in 2019, the NPD Group reports.

And fancy Nordic and alpine touring equipment, split boards, snowshoes, and backcountry accessories including beacons, probes, skins and avalanche shovels, saw sales grow in the high double-to triple-digits, according to the same report, which is also “a significant uptick compared to how backcountry product sales fared during last year’s 2019-20 season as a whole,” NPD Group said.

At the same time, unsurprisingly, sales declined in alpine and snowboard equipment declined by 8 percent — the largest areas of the market — as ski resorts remain shut down throughout the COVID-19 pandemic.

Matt Powell, NPD’s sports industry adviser, said, “Consumers will continue to be active and seek another set of outdoor activities as temperatures drop and we move through the winter months. We can expect backcountry’s popularity to carry through this season and for product demand to grow, especially as the COVID-19 crisis and social-distancing measures continue, ski resorts make operational changes to accommodate the circumstances, and skiers and snowboarders pursue alternatives to get their alpine fix.”

While the spike in sales is a reflection of a new outdoor consumer emerging, the more traditional outdoorsy type is concurrently evolving with the times. Eoin Comerford, chief executive officer at Moosejaw, told WWD that the backcountry ski market is indeed experiencing growth and change. “Sales of backcountry ski gear, also called Alpine Touring, started to explode to strong double and triple digits starting in early fall, as avid skiers looked at potential ski resort closures or capacity limitations. Backcountry skiing also avoids any crowds — the same thing that attracted so many people to hiking and camping this summer.” 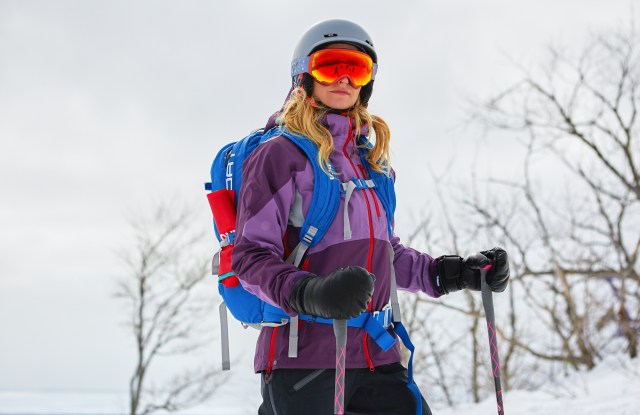 Comerford added that existing consumers in the space need an entirely new set of equipment, as alpine skiing and backcountry skiing are worlds apart. “An alpine or resort skier or snowboarder moving to backcountry needs almost all new gear, as the requirements to climb back up without a lift are quite different.”

For example, he said, “a snowboarder generally moves to a board that splits into two ‘skis’ with special bindings that act similar to cross-country (aka Nordic) skis when going uphill. Safety is the other key consideration in the backcountry, leading to record sales of avalanche beacons this fall and winter.”

And while the overall ski/snow equipment business has “been pretty flat” over the past three to four months, according to Comerford, the brand is still “seeing people move away from traditional downhill skis and snowboards, off mid-single digits, toward backcountry and cross-country skiing, as well as snowshoeing, all up strong double to triple digits.”

“All three [sports] offer the ability to get outdoors in the winter weather and get exercise, all while avoiding the potential crowds or restrictions of ski resorts. The makeup of people at resorts is also changing, with fewer short fly-in, fly-out two to three night stays and more people taking advantage of work from home to enjoy longer rentals in these areas of great natural winter beauty.”

It follows that outdoor footwear brand Keen said its performance winter boots have been in “extremely” high demand this season. Erik Burbank, vice president at The Keen Effect, told WWD, “For winter 2020, we launched a new line of performance boots designed for hiking in the snow and snowshoeing. As COVID-19 accelerated the increase in outdoor recreation, it makes sense that more people would be spending more time outside in the winter, including in the backcountry. We experienced extremely high demand for our performance winter boots and were effectively sold out by mid-December.”

Naturally, activewear is also having a moment, and according to a recent retail report by Edited, “the great outdoors is the new gym.” Its data points to a major increase in sales for running and jogging gear, with a slew of reported SKU sell-outs for activewear products. “This upward trajectory is expected to continue, as the number of January sellouts so far exceeded last year by 15 percent. Sell-outs for sneakers described with ‘trail’ saw a 31 percent increase in sell-outs year-over-year, reflecting the increased interest in hiking,” the firm said.

Jon Howard, director of consumer sales and marketing at Craft Sportswear, North America, told WWD that sports goods for cycling and running began trending up at the beginning of the pandemic. “Once COVID-19 took hold in the U.S., we saw a decent uptick in sales of our cycling and running products. Our brand already was seeing a strong start to 2020, but by April we were seeing some of our best spring and summer months of business. Historically known for being a winter brand, we were happy to see the brand is being recognized for the strong assortment of spring and summer apparel.”

From an industry-at-large perspective, Howard told WWD that two types of consumers emerged from the pandemic. “The first was those new to the outdoors. The people were looking to spend time outdoors since most indoor activities were very limited at best. Perhaps they were active, but not classify themselves as a ‘skier’ or a ‘runner,’ per se.”

He continued, “The second type of consumer we saw evolve in 2020 was the multi-sport athlete. That is the runner or cyclist who was looking for a new outlet come the winter. Maybe cross country or another outdoor winter activity had been on their radar, but had not pursued it due to time or financial constraints.”

Toward the end of the year heading into the winter season, Craft Sportswear saw products for existing athletes and emerging consumers fly off the shelves. “By the time temperatures cooled down in the fall, we saw everything from baselayers to running jackets to ski pants going out the door quickly. We certainly sold a lot of our higher-end products designed for the existing athlete but saw a strong surge of ‘everyday hero’ style products being sold. With people not traveling as much, many people had the resources to explore new passions such as cross country skiing, running, and cycling.”

The commonality shared between these two types of consumers is versatility, Howard explained. “Baselayers are versatile by nature so that was a natural fit for many, but the cross country ski pants or jackets they bought also needed to work in other sports. They were not looking for the performance-driven features, but styles with hoods, styles with a slightly looser cut, and pants, not tights, were sought after. These are the styles you can use skate skiing, touring the woods at home — or taking the dog for a walk.”