Coresight Research Report: Consumers Have Turned Against ‘Made in China’

Coresight Research said there is a growing consumer concern regarding products hailing from China.

A Made in China label.

“Made in China” has become a cause of concern for consumers, according to a new report by Coresight Research. In its latest weekly U.S. consumer survey, the firm unearthed a what it described as a major shift in consumers’ attitudes toward “Made in China.”

Evidently, the coronavirus pandemic has altered consumers’ views of sourcing products from China, with almost half of respondents — 47 percent — agreeing that U.S. retailers should source fewer Chinese-made products.

“This finding is likely to ring alarm bells for brands and retailers that are heavily reliant on China sourcing. Alongside heightened political tensions, our data hints that U.S. retailers should review their supply chains and consider whether they are overly dependent on China as a manufacturing hub — and whether that is evident to their customers,” authors of the report noted.

In a slightly stronger sentiment, only one in five respondents disagree or strongly disagree that retailers should switch sourcing away from China.

And yet, as U.S.-based brands and retailers begin opening their doors, consumers are still wary of public places. Two-thirds of respondents expect to avoid public places after lockdowns end, with 68 percent stating they anticipate avoiding said places or travel, specifically in reference to community centers. 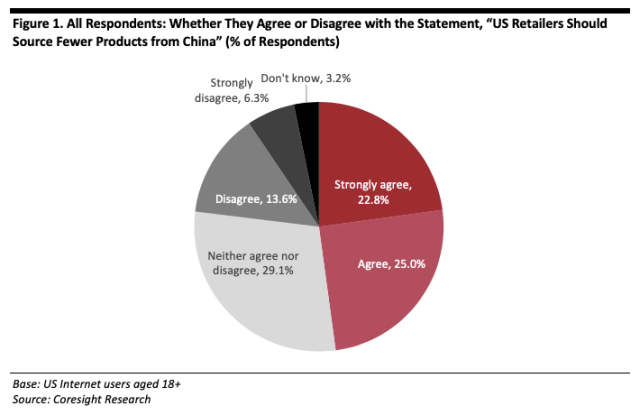 And as far as changed consumer behaviors post-crisis? They’re here to stay, according to the report. “Consistently, two-thirds of respondents expect to keep some behaviors over the long term,” authors of the report said.

All this is in addition to an overall upward trend in expectations to retain changed shopping habits, the report said, with almost 30 percent of all respondents saying they expect to switch shopping from stores to e-commerce, and over one-fifth of all respondents expect to shop less overall once the outbreak ends.