As the world settles into new routines, many fear we remain far away from a return to the old normalcy. From late March through early April, Disqo has surveyed over 32,000 consumers with the goal of understanding today’s consumers’ current behaviors with shifts in online shopping, engagement in new everyday activities, overall spending, and confidence.

Additionally, while fear still rules consumer sentiment, Disqo’s research found that concern about contracting COVID-19 is increasing at a slower rate from prior weeks. The growth of concern from March 23 to March 30 was 1.7 times greater than the growth from March 30 to April 6. Still, 35.5 percent of people surveyed report feeling extremely concerned about contracting the coronavirus.

Nearly half of all consumers surveyed by Disqo are at least moderately concerned about small gatherings of people.

“As uncertain as these times are, most would agree we will get back to normal, though what normal looks like may be a bit new,” said Carl Van Ostrand, vice president of consumer insights at Disqo. “Consumer confidence and spending will rebound — and there are early indicators in our study that consumer concerns, albeit heightened, have stabilized on certain topics. Retailers who are able to deliver in this new paradigm are well poised for growth in the weeks and months ahead.” 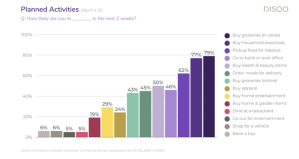 Week-over-week, the age demographic between 25 and 35 years old told the company they are spending more money compared to the month prior. According to the company, this is most likely linked to health and beauty purchases or home and garden items. Overall, half of survey respondents said they are currently spending less money.