Clothing that fell during transit. A minimum of 100 metric tons of clothing is taken from Kantamanto Market to the Kpone Landfill in Tema every day, according to the Or Foundation.

This season, the coronavirus is expected to prompt a spring cleaning like none other — which isn’t exactly good news once that volume of diverted clothing and footwear reaches its final destination.

As consumers profess to new ways — for what it’s worth, even tech billionaire Elon Musk is selling his “physical possessions” — many are intent on decluttering and adopting the mantras of “less is more” or “quality over quantity.”

“Where do all these clothes go?” is a question often asked — but even those receiving, managing and re-commodifying secondhand goods are running out of options.

“With stay-at-home orders in effect, spring cleaning has become a popular way for people to pass the time. As a result, we’re anticipating an unprecedented volume of donations of clothing and household goods, particularly in the short term,” said Tony Shumpert, vice president of reuse and recycling at Savers.

As Bloomberg reported, Goodwill Industries International — which encompasses a network of 158 autonomous nonprofit Goodwill organizations across the U.S. and Canada — is prepping accordingly. One such location in Arizona is looking into a 20,000-square-foot warehouse to house all the excess donations because, while its stores remain closed, donation doors are open. 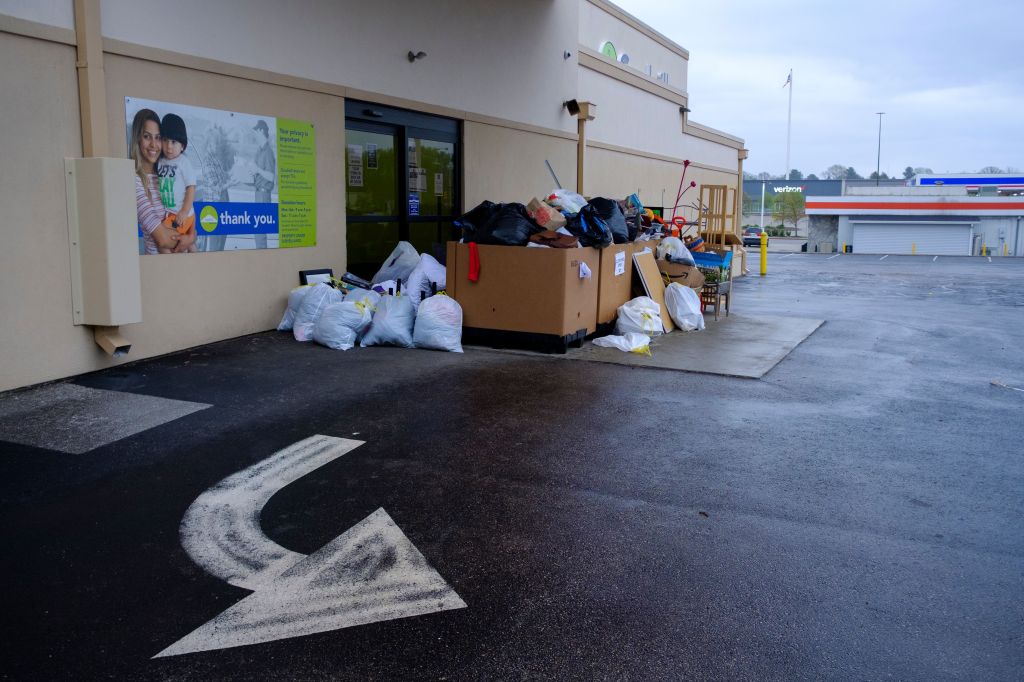 Items are left for donation outside a Goodwill, on a day it’s closed, during the COVID-19 pandemic.  Jeremy Hogan/SOPA Images/Shutterstock

On May 2, Goodwill began opening some of its stores and career centers in parts of Georgia, with increased measures of safety such as temperature checks for anyone entering the building and a 72-hour quarantine for donations before they are put on the sales floor.

Municipal sanitation departments are managing the changes, too. The New York City Department of Sanitation notes the “needs and capacity” of each clothing and textile collection organization listed on its web site may “change rapidly due to the COVID-19 response.” It also announced service changes due to budget cuts, including postponing curbside composting with any compostable items being trashed, which became effective on Monday.

Although its community donation centers and roughly 300 stores have been closed, Savers has been busy staging for its gradual reopening on a store-by-store basis. Its first store in North America reopened last week in the city of Kelowna, in B.C., Canada, but donations are still piling up as the firm plots the reopening of its other donation centers.

“We’ve kindly asked donors to hold onto the items they wish to drop off at our Community Donation Centers until we reopen and are able to accept them on behalf of our nonprofit partners. That way, all of their effort to declutter responsibly and avoid tossing reusable goods unnecessarily into landfills will be realized — instead of left unattended to sit in inclement weather,” added Shumpert.

For the purpose-driven retailer, “spring cleaning” more broadly applies to the enhanced safety measures being adopted, including but not limited to deep cleaning stores prior to reopening, increasing the frequency of cleaning high-touch surfaces (cashwraps and shopping carts), sanitizer stations and the usual PPE.

In the developed world, vintage shops like Something Old, Something New or What Goes Around Comes Around; thrift shops such as Goodwill or Savers, and resale marketplaces like ThredUp and The RealReal furthered the mainstream appeal of old clothes as new opportunities. Without doubt, decluttering was also glamorized by certain trends.

Tracing the amount of used fashion circulating through the system becomes complicated without consistent quantifiable evidence. While the U.S. Environmental Protection Agency estimated the amount of clothing and footwear recycled in the U.S. to be 1.74 million tons in 2017, this obscures both the “formal” and “informal” reuse sectors. As the EPA methodology noted: “Reuse occurs before generation and is not included in the generation or recycling estimates.” Generation refers to production and is determined in part on sales data from the American Apparel and Footwear Association.

But donations remain a steady method of disposal for do-gooding consumers.

According to the Council for Textile Recycling, a nonprofit whose data the EPA employs in its reports, nearly one-half of used clothing in the U.S. is given to charities by the general public, with 61 percent of reusable and recyclable textiles exported to other countries — countries like Ghana, where demand is high and yet the supply is still too much to handle.

Liz Ricketts is cofounder of the Or Foundation, the nonprofit behind the multimedia research project “Dead White Man’s Clothes.” In 2016, the organization began focusing on the secondhand clothing economy in Ghana, where research efforts are rooted in the Kantamanto market — the largest secondhand clothing market in the country, located in the capital Accra.

According to the Or Foundation, about 11 million fashion items including clothing, footwear and accessories are processed in a given six-day workweek at Kantamanto. Every 10 weeks, Kantamanto upcycles, resells and re-commodifies 65 million items, which is what ThredUp has redistributed to date since 2009.

Along with her colleagues, Ricketts was supposed to be back in Ghana in March and April, obviously derailed by the coronavirus, which also stacked up problems for the Kantamanto reuse market where 30,000 people are employed.

“The secondhand clothing economy in Ghana was shut down a long time before the lockdown,” said Ricketts, citing misinformation campaigns regarding allegedly contaminated clothing, since disproved by AFP fact-checkers, floating around on WhatsApp a few months prior. WhatsApp is the most popular instant messaging app across the continent, according to digital agencies such as We Are Social, Hootsuite and SimilarWeb.

“Basically the secondhand clothing didn’t get up and running until last Saturday,” said Ricketts, who also stressed, “This is the worst time ever to be donating your clothing.”

When bales weren’t moving, her team was already working to supply food, sanitizer and rent relief each day. It also included longer-term initiatives like studying the health impact of head carrying — the job of hundreds of women working as kayayei (female head porters) to transport bales of clothing through the market. Each bale weighs a minimum of 120 pounds, according to the Or Foundation.

Describing the resulting situation, she added: “Importers weren’t taking it, retailers were freaked out and keeping their goods. I anticipate that it will just be burned.”

Speaking to how thrift retailers cope with an explosion of goods, Shumpert said: [Thrift store] operators that have already endured hardship trying to remain positioned to reopen may find the cost associated with managing a large imbalance in inventory relative to initial customer demand a very challenging additional cost burden.”

For some 5,000 retailers in Kantamanto who, as Ricketts said, “live hand to mouth,” variances between supply and demand are more excruciating. Once the pandemic subsides, “Retailers are going to need loans and I don’t know who is going to provide loans,” she added, pointing to the April protests by the Kayayei Youth Association demanding the government deliver on failed promises of free water and food.

Having been with Savers for nearly 20 years, Shumpert also witnessed fluctuations in demand during the Great Recession. With money tight for many shoppers, Savers’ total revenue spiked 12 percent from 2008 to 2009, to $750 million. As the National Association of Resale Professionals — reportedly the world’s largest resale trade association — said on its web site: resale is one of the “few recession-proof segments of retailing.”

But even that demand would only chip away at the mound of stuff. Like many, Ricketts is questioning where the clothing excess amassed during the pandemic — including the deadstock from canceled and suspended orders, which for Bangladesh’s apparel industry alone amounted to over $3 billion, and the boon of quarantine closet cleanouts — will go next. She cites “potentially more dumping in Ghana” or in a more “overt way.”

By the Or Foundation’s research, roughly 40 percent of the clothing in the Kantamanto market becomes waste — amounting to 500,000 pounds a week handled informally through means of burning or dumping, either directly into the ocean or at other “informal” dumpsites.

“It can go in a lot of different directions,” she said. But the eventual reality is again — waste. Ricketts added, “There really is no market for the quantity of stuff we’re creating,” attributing the problem again to fast fashion, which prompted the downgrade in clothing and increase in quantity, even prior to the pandemic acting as a rapid pressure relief valve.

The word “shoddy” was coined to describe a mixture of fibers or shredded textile waste, but later came to mean “inferior” — which appropriately encompasses the battle raging in the reuse sector characterized by low-quality goods.

Frankly “Ghana doesn’t have the capacity to take in as much clothing anymore,” said Ricketts. Although she champions personal responsibility, she added: “For us, it’s not up to the consumer. Ultimately, we need legislation.” 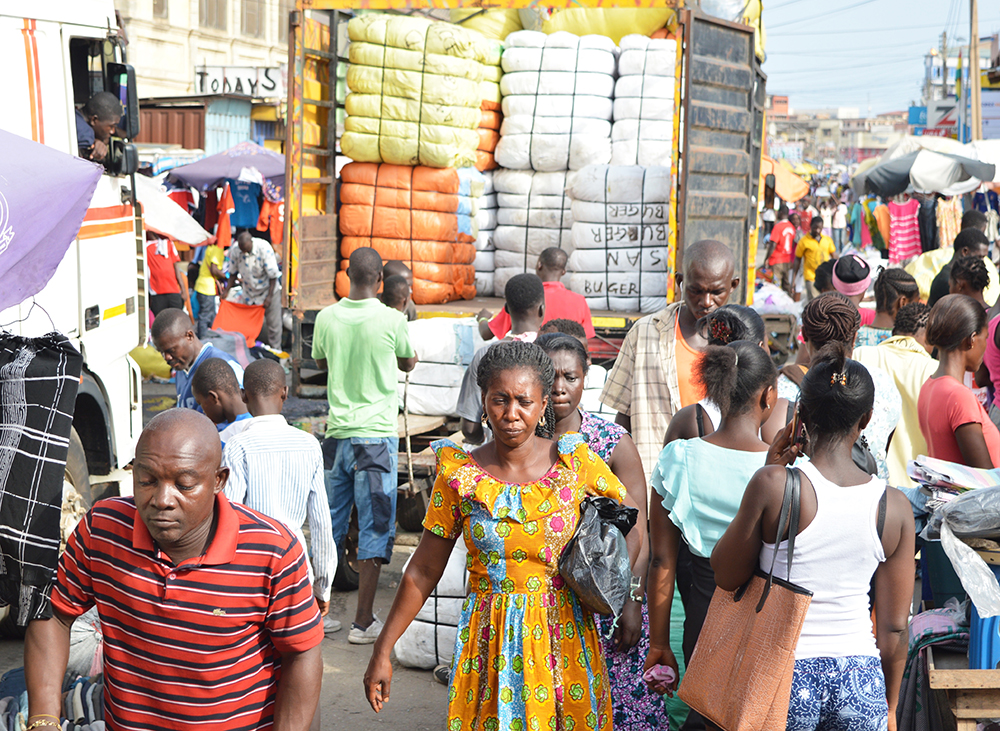 Street scene in Ghana: Bales unloaded while the market is in motion.  Courtesy Or Foundation

Tipping Point: After the Pandemic, Will the Fashion Industry Rebuild Sustainably?

What of Renting, Consigning and Reselling Clothing During Quarantine?

Even for Sustainable Brands, It’s a Matter of Survival