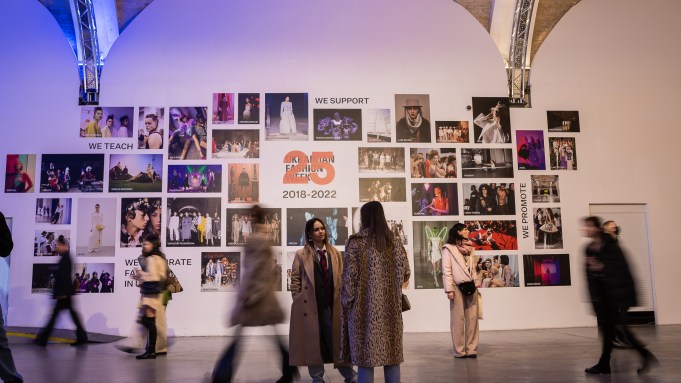 As Russia ordered troops to separatist regions in Ukraine early this week and dropped hints of a wider incursion into the country, the Ukrainian economy is already feeling the negative impacts of the encroachment — including on the nation’s nascent fashion sector.

By 2020, political tensions between Russia and Ukraine had already cost Ukraine around $280 billion in lost GDP, the London-based Centre for Economics and Business Research reported earlier this month.

Relations between the two countries worsened in 2014, after Ukraine’s pro-Russian president was ousted in favor of pro-European leadership and Russian-supported forces annexed the Crimean peninsula in the east of the country.

The ongoing conflict “has reduced investor confidence in Ukraine’s economy,” the CEBR concluded, as well as posing problems for the country’s exporting potential. Current events will only make this situation worse, the analysts noted.

Interestingly, for Ukraine’s fashion businesses, there’s some hope that dependence on exports into Europe may reduce some of the financial fallout from the ongoing crisis. Unlike local fashion retailers, clothing makers at both ends of the sector — from smaller independent brands to mass market manufacturers — are most dependent on foreign clientele.

“It would be fair to say that sales in the luxury [retail] sector have decreased because of the intense situation,” said Maria Mokhova, a Kyiv-based fashion editor and cofounder of local public relations company, White Rabbit. A lot of locals just aren’t buying expensive clothing right now, she told WWD, and local retailers are struggling to sell what they have and, at the same time, buy for next season.

Local brands are not in the same situation though, Mokhova continued. “For many Ukrainian brands,” she says, “the majority of sales come from abroad. So even with the local sales slumping, the overall situation is far from catastrophic.”

“Yes, we are worried about the situation,” Iryna Kokhana, co-owner of independent Ukrainian fashion brand, Chereshnivska, confirmed. “But we are used to instability.”

Sales for Chereshnivska, which specializes in artistic prints and made-to-order looks, have been difficult over the past few weeks, Kokhana said, but she has high hopes that showing her samples in Europe and the U.S. over the next few weeks will lead to more export orders.

Certainly, the local market for Chereshnivska and other similar brands is limited. The country’s economy has one of the lowest GDP-per-capita rates in eastern Europe. This season, a blue Chereshnivska dress retailing for around $200 costs almost a tenth of the average Ukrainian’s annual income — just $2,145 in December 2020.

At the other end of the industry’s spectrum, Ukraine’s less visible — but also far larger — apparel manufacturing sector is similarly dependent on exports.

During the Soviet era, Ukraine was a center of textile production for the Soviet Union, supplying goods around the eastern bloc. After the USSR collapsed, the Ukrainian apparel industry came close to doing the same, its devolution driven by political problems and the loss of its biggest customers, outdated production facilities and, perhaps most importantly, the fact that ordinary Ukrainians couldn’t afford to buy as many clothes.

But since then, there have been a number of important changes that have made Ukrainian apparel manufacturing relevant again, even while the sector has found it hard to return to the sales levels it experienced in the past.

A free trade agreement with the European Union, in effect since late 2017, meant exporting to EU countries became easier. This led to a pivot away from post-Soviet Russia as Ukrainian apparel’s biggest customer.

The free trade agreement also brought big European brands to Ukraine looking for opportunities. Some of the lowest wages on the continent for apparel industry workers — around $136 per month — kept them there. Groups like the Clean Clothes Campaign have been critical of this, describing eastern European countries as a “low-wage paradise for global fashion brands.”

Most recently, the COVID-19 health crisis has seen large EU brands face logistical challenges and massively increased freight prices, while product manufactured in Asia languishes on the other side of the world. This has highlighted the benefits of what’s often called “near-shoring” production. Many apparel factories in eastern Europe are only one long day’s drive away from western European customers.

Almost everything produced in these factories is exported. Germany, Denmark and Poland are among the biggest customers today and Ukrainian factories have worked with some of the biggest brands in the world, including Adidas, Hugo Boss, Tommy Hilfiger, Esprit and Marks & Spencer.

Researchers for the Clean Clothes Campaign believe the number of Ukrainians involved in the apparel industry is actually far higher. They point out that there’s a huge informal, or “gray,” economy in Ukraine and suggest there are likely over 6,000 factories employing as many as 220,000 people.

Right now, it’s still business as usual, Viktor Savula, the manager for foreign business at APIC Interservice, a clothing manufacturer in western Ukraine, told WWD on Monday. The family-run company, based in Lviv, makes corporate clothing for clients in Germany, Austria and Poland.

“At the moment, everything is OK and we sent a shipment last on Saturday,” Savula explained. “But of course things could change any day. To be honest, we are very worried.”

Still, he said, his company had not had any orders canceled and the only communication they had had with clients up until now were just run-of-the-mill business enquires. “But possibly this is because we are located in Lviv. We’re only about 70 kilometers from the Polish border,” he added. “Maybe for factories in central or eastern Ukraine, it’s different.”

Analysts have suggested that if Russia invades Ukraine it would move in from the east and its troops might potentially stop at the central Dnieper river. A number of foreign embassies, including the U.S., the UK, Canada and Germany, have moved some or all of their diplomatic staff to western Ukraine and therefore closer to the EU border.

The export director of another apparel factory based in central Ukraine told WWD that they had fielded some concerned phone calls from European clients.

“There’s definitely an impact on all kinds of exports, not just apparel,” she told WWD off the record — the manager didn’t want to use her name or the company’s because of business sensitivities. “Customers are afraid. They worry about when their orders will be delivered and things like what happens to the banking system, if there is a war.”

It’s hard to say how quickly orders could be canceled anyway, Anna Derevyanko, head of the Kyiv-based European Business Association told local media at the end of January.

“If the business is already in the country and has invested in production, it would be impossible to make such sharp turnaround now, despite the news we hear,” Derevyanko said.

The EBA offers a forum for over a thousand European companies doing business in Ukraine and a survey of its members conducted during the last week of January found that just under half — 45 percent — of the European companies doing business in Ukraine plan to continue operations, even if there is a military invasion. Around 17 percent have looked into relocating to western Ukraine, nearer the Polish border.

WWD asked several German brands whether they planned to cancel orders at Ukrainian factories. On Monday, none had said they were. “We have a long-standing relationship with three partners in the Ukraine,” Hugo Boss replied in a statement. “From today’s perspective, there is no reason to change our sourcing policies.”

“Over the past eight years we have been living in a state of war and it didn’t stop our creative sector from blooming,” she insisted. “Ukraine is no damsel in distress, neither is our creative industry. [The Ukrainian] people stay strong, united and prepared.”

From her perspective in Kyiv, she has noticed there are tensions but mostly life is going on as usual. “Right now, you’d still have trouble getting a table in a trendy restaurant in Kyiv on a Friday night,” she cautioned, adding that she and her colleagues were currently working on the next edition of a local cultural festival, Kyiv Art & Fashion Days, in May.