Sustainability has become more of a priority for shoppers during the coronavirus pandemic.

Sustainability has gained more traction among shoppers, according to Coresight Research — and the much-needed change in consumers’ sentiments took place during the coronavirus pandemic.

In the firm’s weekly U.S. consumer survey, some 29 percent of respondents said the pandemic has prioritized sustainability for shoppers, citing reasons such as shifting priorities and lockdown, “indicating the potential for rapid change.” Comparatively, some 16 percent said the crisis made sustainability less of a factor. 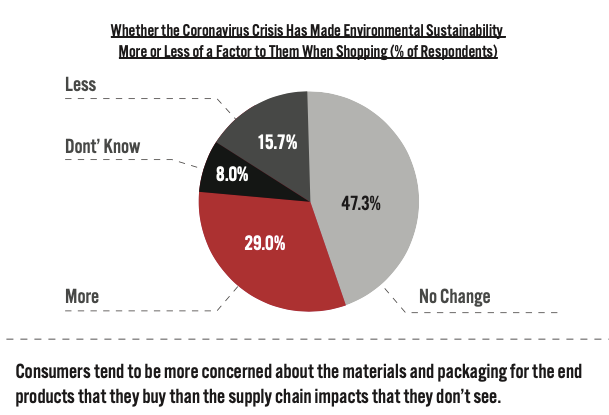 They added, “In general, consumers seem more concerned with the issue of product and packaging disposal for the end-products they can see than the supply chain impacts that they don’t see, such as the use of chemicals, use of water and carbon emissions.”

But shopping in public, it seems, is still declining in popularity. Eighty percent of respondents said they continue to avoid shopping in any public area.

“The proportion of respondents that are currently avoiding shopping centers/malls slid slightly again this week, to 58 percent this week, compared to six in 10 last week. Although shopping malls remained the most-avoided places among consumers, we have seen a gradual declining trend in the avoidance rate, which has dropped by roughly eight percentage points from the peak of two-thirds on July 22. In a separate survey question, we found that the proportions of consumers visiting open-air and enclosed shopping malls in the past two weeks both increased slightly,” the authors noted.

As far as avoiding food service locations, the proportion of respondents fell back by almost six percentage points to the lowest level seen since June. And as for entertainment and leisure venues, this week was the highest decline in avoidance rate, of almost seven percentage points.