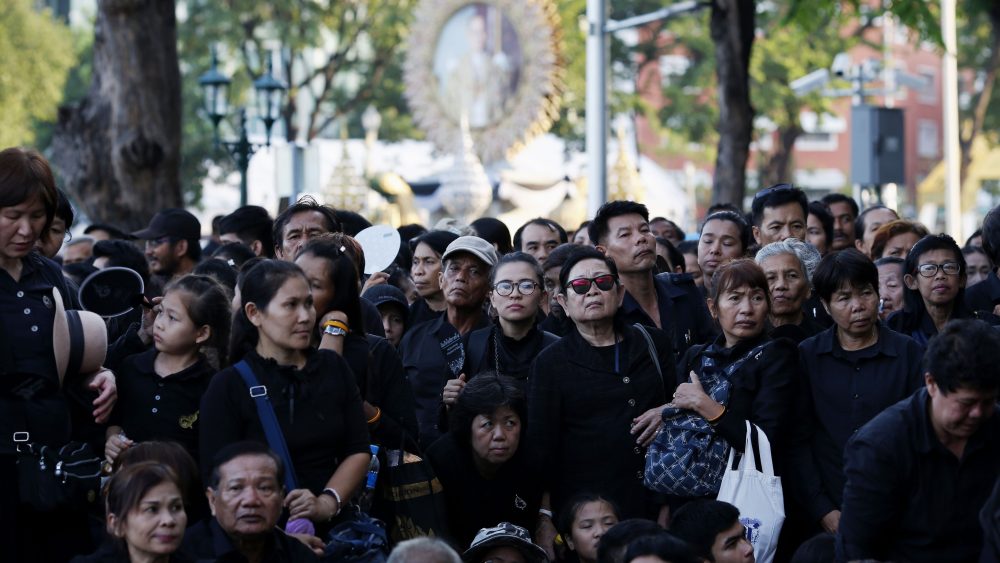 BANGKOK — Thailand on Wednesday began a five-day cremation ceremony for its late monarch, King Bhumibol Adulyadej, marking the end of a yearlong transition period in which the country bid farewell to a leader who oversaw its economic development for seven decades.

In the weeks leading up to the cremation rites, citizens young and old lined up outside the Grand Palace, waiting for hours to get into the grounds to pay their respects. Many of them clutched wreaths of jasmine flowers, while some chose to bring yellow blooms — the color associated with the royal family.

Clothing vendors throughout the city have been busy stocking up on paraphernalia depicting the late king’s face, while others like the Central Department Store chain put on special sales for black apparel.

Boonyalip Kahawong, a 52-year-old pharmacist, traveled from Nakhon Nayok province — about 60 miles northeast of Bangkok — with his wife to pay their respects. “We love his majesty because he has done so much for the Thai people. He is the father of this land,” said Kahawong. “I think we lost the heart of Thailand.”

But alongside the outpouring of grief is concern and skepticism, too. Political instability has been an Achilles’ heel for the nation and the late king provided a stabilizing and unifying force. His son, the new King Maha Vajiralongkorn Bodindradebayavarangkun, who ascended to the throne in December, remains an unproven entity.

Pui Wongsuthee, 68, who traveled from Chiang Mai to say a farewell, was one of those feeling uncertainty over Thailand’s new leader.

Political headwinds have hamstrung Thailand’s burgeoning economic engine, most recently in a coup removing then-prime minister Yingluck Shinawatra in 2013 and the subsequent establishment of a military junta. This followed similar coups in 2006, and 2008 to 2010.

Nationwide, same-store sales growth fell 2.3 percent in 2013 and were flat in 2014, according to Daiwa Capital Markets analyst Phannarai Tiyapittayarut, compared to growth of 7.6 to 11 percent between 2010 and 2012.

The year of mourning has taken its toll, but many industry observers are hopeful economic activity will recover as the country adjusts. According to Chatrchai Tuongratanaphan, executive director of the Thai Retailers Association, countrywide retail sales totaled around $108.5 billion in 2016, and his association’s members are responsible for about a third of that.

While the last year has seen slow growth for his members — only about 3 percent — Tuongratanaphan is optimistic about an upswing in retail consumption after the royal cremation rites are over this month.

“This month specifically, the mood of the shopping is low, but I believe after the cremation, let’s say from November to December, the people’s mood will recover, and [sales] will increase,” he said.

Tuongratanaphan also acknowledged that the late King Bhumibol Adulyadej had great sway across Thai society, and his son will need more than a decade to build up the same amount of influence.

“I think this will take time because our past king had been the king for 70 years, and it was a very long, long period, and the new king has to take time. In just five or 10 years, there won’t be enough influence,” Tuongratanaphan said, adding that this will not stop Thailand’s economy from accelerating.

“We are very optimistic and we believe that from now until five years later, our GDP should hit 5 or 6 percent. I think you might even see that in three years,” he said.

This year, the Bank of Thailand is forecasting gross domestic product growth of 3.8 percent, while HSBC is expecting 3.5 percent.

Chartchai Singhadeja, executive director of the Thai Garment Manufacturers Association, was more measured, as his members fared worse. He said that domestic consumption of garment products have declined by almost 30 percent so far this year.

In fact, he said, most of the sales of colorful clothing in Thailand over the past year have been driven by tourism. Clothing stalls in Bangkok’s popular MBK Center reflect this stark difference in fashion preferences, with vendors hanging fashionable black blouses on one rack — alongside commemorative T-shirts exulting the late king — while pastel and brightly colored blouses are folded on a side table for tourists.

Politics aside, and despite lagging other developing economies such as India and Vietnam, Thailand still holds a great amount of potential because it has many underpenetrated regions not yet fully exposed to modern retail stores. It was just 70 years ago that Central Group introduced the idea of fixed pricing to the country and opened its first department store.

“From an agricultural-based economy to a middle-income transition, the urbanization trend, changes in Thai people’s lifestyles, and a demand shift with growth, upcountry provinces have welcomed the emergence of modern-trade retail channels,” said Daiwa’s Tiyapittayarut.

She continued: “According to the Nielsen Company, the modern-trade penetration rate has grown from 36 percent in 2000 to 46 percent in 2009. As branch expansion has been faster since then, we believe penetration has increased to 55 to 60 percent at present, with room still to open more stores.”

“Thailand continues to be a consumer force to be reckoned with,” consulting firm BCG said in a report published Oct. 2. It highlighted that, bucking multiple trends in Southeast Asia, Thais are loyal consumers who are willing to pay more for many of their favorite brands and are more likely to spend and indulge, evidenced by their higher debt levels.

The country’s online retail landscape also took major steps this year when Chinese online conglomerates JD.com and Alibaba began their efforts to win over the Southeast Asian consumer through their investments with Central Group and Lazada, respectively.

Singhadeja believes Thais will show respect to the new king, although next year’s election, which Prime Minister Prayut Chan-ocha announced will take place in November 2018, will prove an inflection point.

“We are a little bit afraid. We don’t know who will be the next prime minister, if he is strong enough to control the country and make things strong like right now and help us cope with the world’s economy,” he said. “We will just have to wait until the election, and after that, I don’t know. It is in doubt.”