As the monolithic chain of command for e-commerce expands, the place for at-home delivery will always be held near to shoppers' hearts. 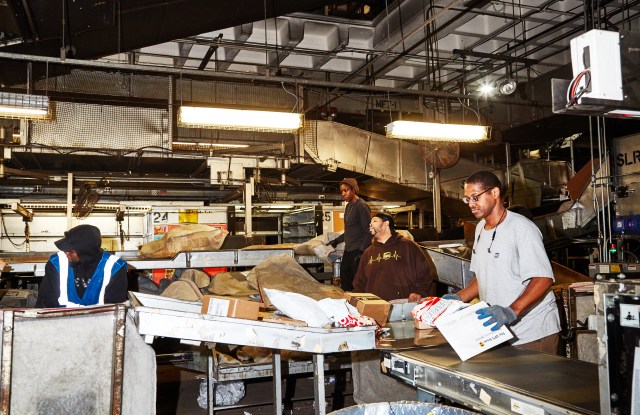 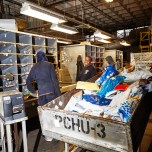 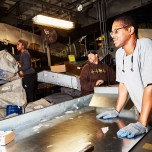 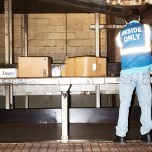 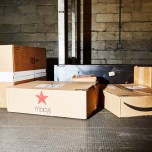 Click, “select size.” Click, “add to cart.” Click, “checkout” — sometimes more clicks, sometimes less – until an order confirmation zings to e-mail or text. Now, give it a day or two to arrive — because that’s all today’s consumer will scarcely allow before they expect a package at their doorstep.

Few consumers regard the logistical intermediary between e-checkout and receiving their goods. But if a target were to exemplify the modern e-commerce business model, then the customer is the bull’s-eye, and delivery logistics are the hand which guides the dart, or package, into the rightful center.

In an attempt to uncover a deeper narrative of how package delivery service providers operate and embed in communities, WWD started with the people, with this reporter joining a ride with UPS that began with a tour of the company’s 43rd Street facility in Hell’s Kitchen and buckling in for a route in Midtown Manhattan. Having been assisting small businesses and large corporations in its package delivery and multinational supply chain management since 1907, the United Parcel Service (UPS) preps for volume increases driven by the holiday season.

“After Cyber Monday, it’s like a switch goes on,” said Alex Gamboa, Radio City Center business manager when asked how the seasonal changes were shaping up for UPS’s 43rd Street facility. The “on” position also means extra hands on deck.

UPS said its seasonal hiring officially began Oct. 15, with the expectation of hiring about 100,000 seasonal employees to “support the anticipated increase in package volume that will begin in November and continue through January 2019,” according to the company.

But an indication of this hiring need is measured in strokes of online shopping activity as the months grow colder, written across the conveyor belts wherein packages increase in number and size, with televisions and sofas even passing along to be processed and shipped, especially in anticipation of Cyber Monday surges. This holiday shopping season is poised to see a 16 percent year-over-year gain in online sales, according to eMarketer.

And regardless of inclement weather or volume-driven increases from increased online shopping across the holiday timeline, the UPS package does arrive — be it by air, freight, truck or on foot, or through a combination of these methods, unwitnessed to the end consumers who only glimpse the tail end of effort, perhaps experiencing mild frustration in that they are unable to claw open a box without reaching for a pair of scissors.

“A lot of people are involved” before a package hits your doorstep, said UPS driver Eric Zheng to WWD. Zheng, who has worked with the carrier for four and a half years, seized the opportunity to be a driver some two years ago, transitioning from seasonal help to full-time. Zheng, donned in the company’s familiar brown uniform, welcomed WWD aboard the package truck to trace the steps of orders populating his route as the holiday season was just kicking into high gear.

And it is a route that is hard-earned. To “own” a dedicated route as a UPS driver generally warrants a “six-to-eight-year-long waiting list” in high-volume facilities such as that of the UPS 43rd Street facility.

This WWD reporter buckled in for the morning in the package truck’s “right command” position also dressed in brown workwear, which is not far from the image of spring 2019 runway’s infatuation with utilitarian wear seen in heavyweight cottons, patch pocket detailing and jumpsuits in shades of earth.

For the record, the idea of the brown truck was sprouted several years after UPS began — rising from a need to camouflage the grit and mud of early, non-paved roads. But to Zheng, the brown truck represents much more than a process in a customer’s order: it welcomes “respect and trust.” Holding the keys to roughly 80 percent of the residences on his route, the gifting of one’s keys typically stories the significance of a trusted partner, and it’s no different than the relationship between a resident and their delivery man or woman.

Delivery requires interfacing with people all along the route, greeting the doorman, getting a signature and some quick decision-making to ensure the right packages end up with the right customers. The drivers operate on a first-name basis and across two rounds, being both delivery and pickup; the role is customer-facing yet assumes a staple in the neighborhoods where residents and businesses rely on their orders — and drivers such as Zheng — as the package volumes increase “both commercially and residentially.”

Sliding up the backdoor to witness cardboard boxes and padded envelopes stacked and lining the truck’s interior perimeter, some insights are drawn from which fast-fashion e-tailers are winning the moment with their promotional deals, noting the appearance of various retail monikers — the red cursive lettering of H&M, or the black, blocky typeface of ASOS.

Across logistics, the importance of teamwork is clear, especially in the “last mile” — from sorting of packages, to expertly packing the package truck to soliciting help along the way through the aid of seasonal “helpers” meeting drivers along the route and scanning packages with smartphones or riding right-hand to the driver in the fold-down jumper seat. While the drivers know their routes, Telematics, the UPS-adapted proprietary technology, studies each driver, examining safety measures, such as the buckling of a seat belt or the “three points of contact” wherein a driver must have a foot on the ground, as well as a step, while making contact with the handrail.

And as sensors detect and help to correct everything from driver safety, using feedback to recommend improved efficiencies, the driver studies their route and provides the customer-facing service that differentiates them from other deliveries. Like any set of wheels churning through the congestion of New York City streets, parking and traffic create the greatest day-to-day challenges during delivery for UPS drivers, especially during holiday peak season.

No GPS is seen in the dashboards of the Manhattan vehicles. Instead, drivers are permissible in deciding route efficiencies, but Telematics aids in other ways such as consuming data on driver speed, stopping force, seat-belt use and vehicle fuel efficiency to cut costs.

Following in stride with Zheng, it’s clear the attention paid to each package. Prioritizing the delivery of medicines, which are costly, perishable and essential for their recipients, as well as costly, fragile orders to companies which frequently ship by air — such as luxury fashion fulfillment centers which already operate on a time crunch.

Along the route, a helper will meet to assist with the excess in packages, loading a few packages onto the handcart or in hand to increase efficiency while Zheng continues his drop-offs. He will take a second round later for pickups, and if any miscues occurred, he will correct it during the pickup round.

Each day, he and his colleagues trace their delivery routes, which is only the radius of a couple blocks, with such efficiency that even peak shopping during Black Friday or Cyber Monday are approachable demands.

It’s clear, as the monolithic chain of command for e-commerce expands, with small businesses now flipping into mini-distribution hubs and lockers opening for easier pickups — the place for at-home delivery will always be held near to shoppers’ hearts, and in the case of apartments in New York City, a certain trust in landlords handing over a spare key.