De Beers is aiming to become carbon neutral, and ideally carbon negative, with an ambitious plan. At its core is the rough kimberlite rock that encases diamonds.

The fuchsia-clad Marilyn may have only been telling part of the story in “Gentlemen Prefer Blondes,” when she sang out her paean to diamonds. It turns out that diamonds — and, in particular, their rough outer casings — may well be Mother Nature’s best friend, too.

De Beers Group is on a mission to find out: It has been working with three Canadian universities to explore the potential for kimberlite, the unprepossessing gray rock in which diamonds are found, to trap and store carbon emissions for millions of years, far longer than any tree could.

The discovery of kimberlite’s carbon-zapping powers was made about five years ago, while De Beers has been doing on-the-ground tests at its Canadian and South African mines for the past two years.

De Beers said it has been investing millions of dollars into researching how to speed up and scale kimberlite’s ability to absorb carbon. It then plans to use kimberlite to offset its own carbon emissions, and potentially those of other companies, too. 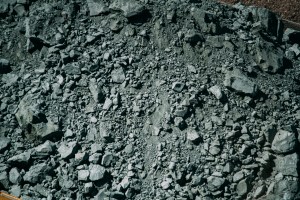 Kimberlite rocks from the Orapa mine.  Photo courtesy of De Beers

Internally, the company has been calling its mission Project Carbon Vault, “because we’re seeking to lock away the CO2 in the rock — forever,” said Stephen Lussier, executive vice-president Consumer and Brands at De Beers Group and chairman of the De Beers diamond brand, Forevermark.

He said kimberlite is among the Earth’s one percent of rocks, known as ultramafic, that are naturally able to soak up very high concentrations of CO2. Unlike plants and trees, kimberlite doesn’t have to be planted — and it doesn’t die.

It’s been blasted in volcano-like bursts from deep inside the earth, and once the diamonds are extracted from it, kimberlite just sits in piles on the mine site. It is kept in situ, so that miners can return, and eventually sift through it, for diamonds they may have previously missed. Over time, plants grow over the tops of the rock piles, turning them into oddly shaped hillocks.

Lussier said that one way to get kimberlite to absorb more CO2 is by increasing the surface area of the rock, crushing and spreading it over a large area: The more the rock is exposed to CO2, the more gas will absorb over time. The teams are currently testing how to speed up the absorption process by treating the kimberlite with chemicals, or with natural materials such as algae which increases its sponge-like powers.

“You can turn something that’s just sitting there into something productive,” said Lussier in an interview. “The promise is so exciting, because together with the other things De Beers is looking at around dramatically reducing our carbon footprint, we could become carbon storage facilities — as well as diamond mines.”

“If we have the ability to eliminate our own footprint, then we’ll be able to offset other people’s footprints, too,” he said. What’s more, the Canadian researchers are also looking into other types of ultramafic rocks found on mining sites that could potentially store carbon, meaning that the mines would have a role to play as CO2 storage locations well after all the diamonds have been excavated. 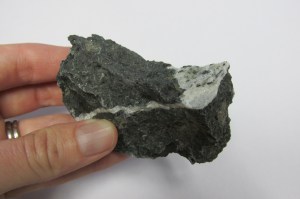 The research dovetails with De Beers’ efforts to become carbon-neutral, and eventually, carbon negative. Later this year, the miner plans to come out with a sustainability report in which it will set out its carbon usage and future goals. The report was set to be published this spring, but Lussier said the coronavirus lockdown has delayed it.

Asked about kimberlite’s potential, Lussier said the rock could eliminate 30 percent of the company’s carbon footprint. De Beers is working on other carbon-blasting initiatives, too, and is focused on converting its trucking fleet to electric power.

Trucking and transportation are proving environmental devils for De Beers and the luxury brands alike.

Marketing and events accounted for just 10 percent of overall emissions, compared with raw materials, at 26 percent, and transport of finished goods, at 24 percent. The report, called Chanel Mission 1.5, looks at how Chanel has been tackling climate change in line with the targets of the 2015 Paris Climate Agreement.

Ahead of the De Beers report, Lussier lifted the veil on some of the company’s aims. He said the strategy for eliminating the carbon footprint is three-pronged: Electrifying the trucks used at the mines; creating own sources of energy and electricity with solar power and wind power; and pressing kimberlite into action as a carbon vault.

Lussier said that in pursuing its sustainability agenda, De Beers has an edge over the luxury groups because it’s so connected to the natural world. “We have plenty of land, endless sun, and on the Namibian coastline there’s endless wind, perfect natural places to generate our own renewable sources of energy. We’re very optimistic that we’ll be able to come out in a way that’s beyond what most luxury groups that have more complicated sourcing, can do.

De Beers Group owns seven land-based diamond mines, one in Canada, four in Botswana, one in Namibia and one in South Africa, and has also been undertaking biodiversity projects in the countries where those mines are located.

According to the company, for every one acre of land used for mining, De Beers Group sets aside and manages six acres of land for conservation, supporting endangered, threatened and vulnerable species. It also works with conservation partners to support a range of species including rhinos, elephants, cheetahs and giraffes.

Lussier said the upcoming sustainability report will also look beyond climate change and how to trap and store CO2 emissions.

“We’ll be looking at all our packaging, too. It’s not important with regard to De Beers overall, but it’s quite important in the retail line of the business. And I think it’s important to be able to do things that are visible to people. They can see our commitment to a sustainable future through packaging and transport.”

He added that De Beers wants to put a bigger push behind its conservation efforts.

“We have a lot of land, and we’re also looking at our ability to use that land in a way that is CO2-absorbing. Can we plant trees or plants? We’re not that interested in buying offsets, but we’re very interested in creating our own. That’s our advantage, we can control much more of that whole process ourselves.”