At a luxury conference in Milan, Tod’s ceo responded to the designer’s criticism against Prada's decision to go public. 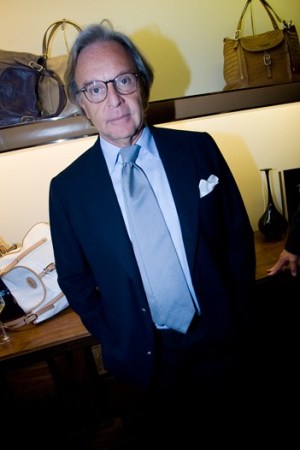 At a luxury conference here Tuesday, Tod’s chairman and chief executive officer Diego Della Valle took on Giorgio Armani over the designer’s criticism last week against Prada and its decision to go public. The conference also saw Brunello Cucinelli set a time frame for an initial public offering of his luxury apparel company, hinting at spring, and Renzo Rosso of Diesel admitting he, too, will seek an IPO at some point.

After his men’s show last week, Armani contended that houses such as Prada and Dolce & Gabbana make men look ridiculous and blamed the press for not being more critical about clownish styles that men don’t wear. One reason, he said, is that “fashion today is in the hands of the banks and of the stock market and not of their owners,” stressing how he doesn’t need to do an IPO because his company is independent and doesn’t have any debt, and that his clothes make men look more handsome and elegant.

“That kind of attack does not make any sense, and it was the least opportune moment,” said Della Valle of Armani’s comments. “[Prada’s listing] was a beautiful operation, with global visibility.”

“Rather than criticizing Prada’s strategies, Armani should do the same thing, invest in the territory, as I did in Rome, contributing to the restoration of the Colosseum. In a moment of crisis, it’s important to be part of a team, and it’s our duty to give a signal, not waste time in useless attacks,” said Della Valle, urging Armani to approach other sites in need of restoration, such as Milan’s Castello Sforzesco.

Della Valle isn’t afraid to speak his mind, as he did six years ago when he publicly challenged Italy’s Prime Minister, Silvio Berlusconi, over one of Italy’s newspapers, Corriere della Sera, and on Tuesday he referred to Armani as a “sprightly old man,” the same expression he used to define Cesare Geronzi, the former president of Italy’s giant insurer Assicurazioni Generali SpA. Della Valle, who sits on the board of Generali, initiated a shake-up of Italy’s financial world and was instrumental in Geronzi’s eventual resignation in April.

As for the luxury goods sector, Della Valle said, “We face today a big change in the luxury market. We must stop being individualists.

“On the contrary, we must learn from big foreign groups that create conglomerates of companies that are competitive,” the luxury goods titan observed at the conference, which was organized by Il Sole 24 Ore.

In that vein, Della Valle praised the deal in March for LVMH Moët Hennessy Louis Vuitton to acquire 50.4 percent of Bulgari in a cash-and-share swap with the jeweler’s founding family. “An excellent deal done between friends, perfect for the buyer and perfect for the seller,” said Della Valle, who sits on the LVMH board. “The rest is rubbish that can keep serious investors away,” he added, referring to the Italian press, which was in some cases annoyed by the fact that a legendary Italian company was to become part of a French group.

For his part, Della Valle said Tod’s growth is organic, not through acquisitions. Listed on the Milan Stock Exchange, it includes the Tod’s, Hogan, Fay and Roger Vivier brands.

In a video message, Bulgari ceo Francesco Trapani said the goal of the LVMH deal was to “transform Bulgari into something bigger, more prepared to face such a very competitive and global market, which is in the hands of big groups. The brand remains Italian, there is no need for a French Bulgari, and each company [within LVMH] has its own strategy. LVMH is an international, multinational group with Italian managers and American shareholders.”

Trapani urged entrepreneurs not to treat their companies as a “toy” and to catch opportunities to grow, even if it means losing control.

As for the rapidly expanding Italian IPO market, Cucinelli reiterated his wish to take his luxury apparel company public to grow his company, ensure its future and attract strong management. He pinpointed spring as a possible window. “I’ve decided to list in Milan, as I am a great supporter of Italy, Umbria [where the company is based] and our culture,” said Cucinelli.

Diesel’s Rosso also said a “listing is almost obligatory,” but views this option as likely to take place in “perhaps three years.” Rosso said, “there is no immediate need, I have two sons working in the company, we have a positive cash flow, and we are free to go against stream with our decisions, but IPOs allow for more transparency and attract managers with stock options.”

On the other hand, a public listing is time-consuming and keeps management less focused on the company’s daily business, he noted.

Della Valle and Rosso once again touted the strength and relevance of Made in Italy products, as did Bottega Veneta ceo Marco Bizzarri, who is a strong promoter of the country’s manufacturing districts. Bizzarri also upheld Bottega Veneta’s parent company, PPR, for helping the brand’s turnaround.

In a prerecorded speech, PPR-owned Gucci’s creative director Frida Giannini, said, “The identity and creativity of each brand is entirely respected.”