A 5,000-square-foot retail store is part of the immersive destination that opens Aug. 12.

Mickey Mouse can soon work on his jump shot.

On Aug. 12, the National Basketball Association and Walt Disney will unveil a one-of-a-kind NBA Experience destination at Disney Springs at the Walt Disney World Resort in Lake Buena Vista, Fla.

The 44,000-square-foot space was created by Walt Disney Imagineering in collaboration with the NBA and will include 13 immersive activities as well as a 5,000-square-foot retail store with product created especially for the location. 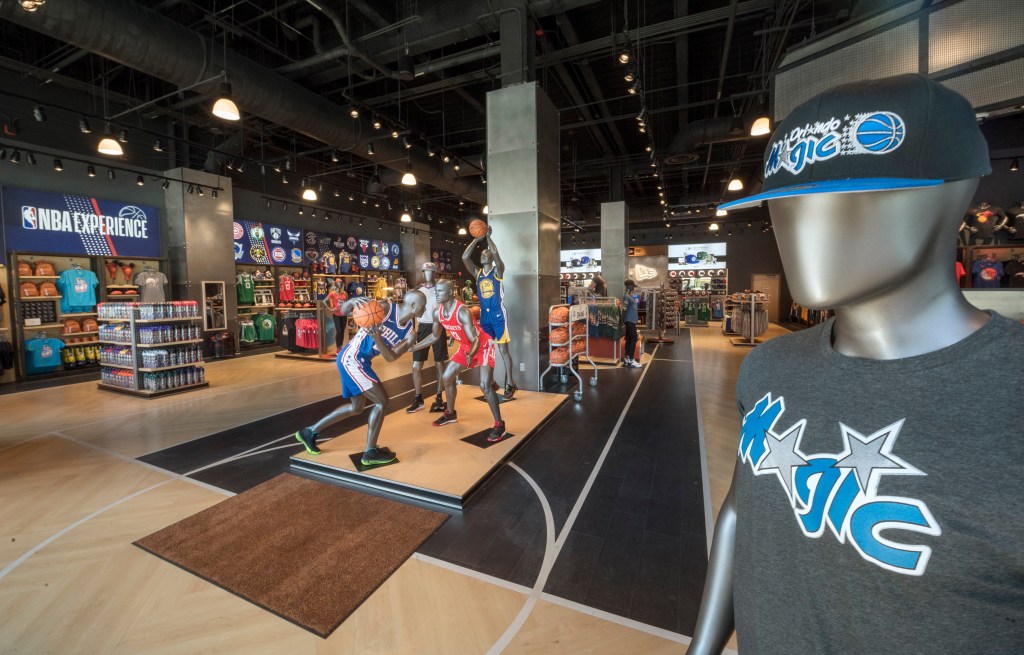 The retail store at the NBA Experience at Disney World.

The retail store will sell an assortment of official NBA and WNBA merchandise for adults and children including jersey, hats, basketballs, home goods and accessories. There will also be limited-edition memorabilia and collections.

There will be a selection of “bespoke cobranded product” designed especially for the space that includes Mickey Mouse-ear hats with a pebble-grain bill; a Mickey Mouse basketball-themed mini backpack and T-shirts with Disney characters in action poses. 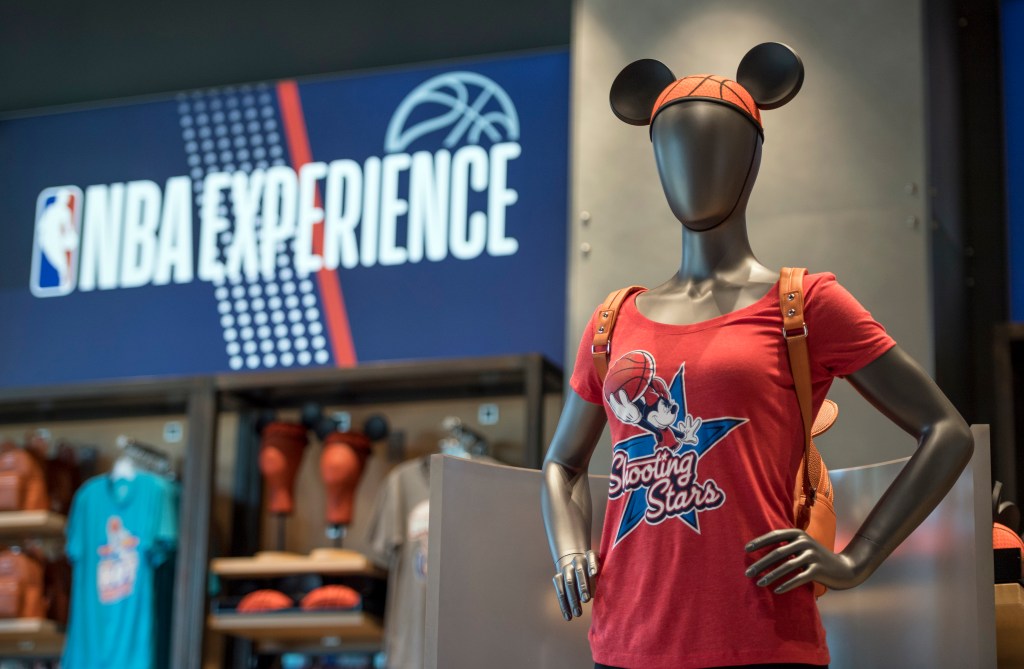 Mickey Mouse sets up for a slam dunk on a special T-shirt.

The store had a soft opening earlier this month and is free to enter and shop. But the entire experience space requires an admission ticket that costs $34 for anyone age 10 and older and $29 for children three to nine.

Entering the NBA Experience will be like walking through the players’ tunnel out onto the court. Once inside, attendees have access to activities that include Dribble, where ball-handling skills are tested and an interactive coach provides tips; Dunk, where cameras will capture attendees executing a perfect slam dunk into height-adjusted baskets; Slingshot, an oversized slingshot that launches balls at hoops of varying heights within a certain amount of time, and Combine, where NBA drills can be practiced.

Other highlights include stations where visitors can shoot baskets, experience the NBA Draft, watch replay clips, walk through replicated locker rooms, check out the NBA championship and MVP trophies, play video games at an arcade and test their knowledge at a trivia station.

Two films will be shown at the destination, one that captures the essence of attending an NBA game and the second that showcases the personal story of one player, Jrue Holiday of the New Orleans Pelicans.

Scott Lazaruk, vice president of branded attractions and partnerships for the NBA, said the league has had a relationship with Disney for nearly two decades and the companies started talking about how to take their relationship to the next level several years ago.

Once this opportunity was presented, the league worked closely with the Imagineering group to create the experience, which is the only one of its kind in the world, as well as the cobranded product.

Lazaruk said among the products that are expected to be most popular are socks from Stance that feature Disney characters, and the Mickey Mouse backpack. Products that can be customized such as phone cases, MagicBands and water bottles are also expected to be fan favorites. 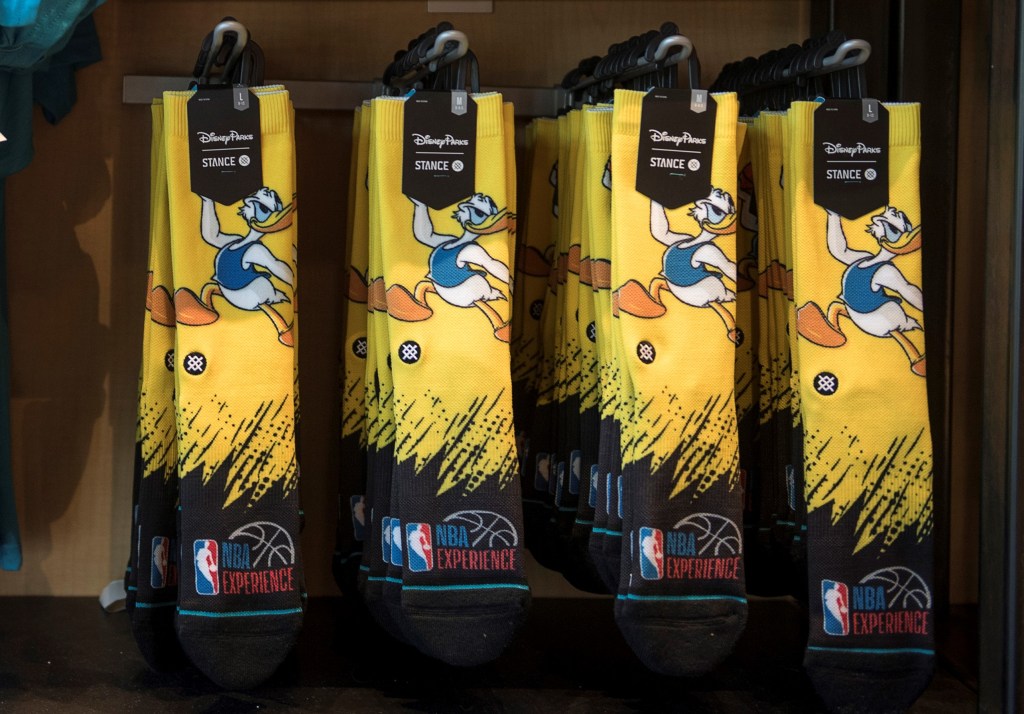 Donald Ferro, director of merchandise strategy and product development for Disney Parks, Experiences and Products, said the goal was to create merchandise that would “immerse” the theme park visitor and the NBA fan in the Disney experience. So the two companies homed in on signature elements of the league such as the pebble grain used on basketballs, and interpreted that into unique product such as the Mickey Mouse ears on the backpacks. Ferro said a Minnie Mouse headband will be added for holiday.

The graphics on the apparel are unique to the space and will include a “very determined and expressive” Mickey Mouse in action poses.

This marks the first brick-and-mortar experience with a professional sports league and Disney, he said, adding that there are no plans at this point to replicate it at Disneyland in California or elsewhere.

Lazaruk said from the NBA’s perspective, while there are other attractions around the world, including a new restaurant in Barcelona and some other activations in China, this is the only one in the States. “We’re bringing the immersive experience to fans,” he said, adding that the NBA Store on Fifth Avenue in New York has several interactive elements, but not to this scale.