Brands that channel messages of body positivity are succeeding with younger generations.

As a noticeable shift takes place in the world of intimates and fashion marketing, emerging brands have transitioned to body-positive over-sexualized imagery. And recently, some advertisements, from fast-fashion brands, have been banned in the U.K for objectifying women.

Historically, representations of sexuality and what constitutes what is traditionally sexy have done well in advertisements. Though Sara Beech, strategist at Frontier Strategy, told WWD that consumer attitudes are evolving to become more diverse, inclusive and authentic — wanting to see the subject be empowered rather than an object of affection.

“There’s a shift toward more open, honest, real and diverse conversations, depictions and explorations of sex and sexuality from a multiplicity of viewpoints,” Beech said. “While sexual imagery in advertising still grabs attention, it has been shown that it does not necessarily lead to sales. And attention-grabbing for attention-grabbing sake will no longer wash with audiences, who are more canny and alert than ever to overt, forced and inauthentic behaviors and tactics in advertising.”

Further, Beech says, “Gone are the days when soap brands can convince women that if they just buy their product, they will be more lovely, interesting and able to bag a husband. Or when a fully clothed man can stand next to a naked woman in an ad, and get away with it.”

Notably, the younger generations are especially resistant to sexualized marketing and to illustrate, brands like Parade have successfully entered the market with body-positive messaging.

“This has a lot to do with the #MeToo movement, which I think is very powerful,” said Caitlin Strandberg, principal at Lerer Hippeau. “Sex doesn’t sell to [the Gen Z audience]. They are about female empowerment, body positivity and being expressive however you choose to express yourself. Sexiness itself now is self-acceptance and competence and owning yourself. It’s all about whatever you want to be and that’s what’s going to sell.”

Simultaneously, while the traditional idea that “sex sells” may be outdated to a younger audience, the idea of sexiness from empowerment is something that brands can take on.

“Today, sex alone doesn’t sell — sexual confidence, empowerment, positivity and wellness does. We have changed the narrative to be personal, not about the act of pleasing others,” said Caroline Limpert, chief marketing officer at Gelmart. “I don’t think the change has a negative impact; the conversation has changed, the marketing has changed and a new generation of consumers have embraced their sexuality, bodies, and honesty in conversation.”

The consumer demand, Beech told WWD, is not about a blanket ban on sex, but to see representative portrayals and honest conversations around sexuality.

“There are great opportunities for brands, which can be part of this conversation in an authentic way,” Beech said. “It should be noted that the diversity of the people creating things work will be crucial to its effectiveness.” 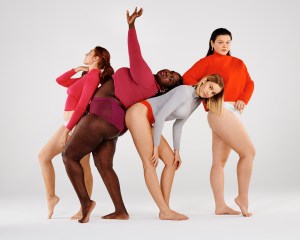 One way for brands to tell an authentic story is through social media. Strandberg said the intimacy brand Parade is re-creating the “American underwear story” with size inclusivity, bright colors and openness to self-expression.

“[Parade] worked with a large group of ambassadors [through Instagram] who are both influencers and community members that have people not only talking about the underwear and purchasing it but also posting photos of themselves in the underwear, which is incredibly rare. And you can see the diversity of the community,” Strandberg said. “You have an unbelievable around of user-generated traffic, they have an unbelievable one on one connection with their customers — and on every pair of Parade’s underwear there is a phone number that you can text with questions and photos.”

New lingerie brands, overall, that channel messages of body positivity and intimacy are resonating with more women, especially younger women. In addition to Parade, Beech points to brands such as Lonely who create “for women who wear lingerie as a love letter to themselves.”

“[Lonely] includes women of different shapes, ethnicities and ages, in natural, realistic poses in their advertising,” Beech said. “And American Eagle Outfitters Inc.’s Aerie is attracting attention and followers for using models with different body types and for not retouching its images, gaining market share in the process — it’s estimated to be worth $1 billion in the next few years.”