The Impact of Nontraditional Retail Footprints, Formats and Assortments

Dollar stores, such as Dollar General, rely on a secret sauce that includes smaller-sized units, which resonates with consumers.

With back-to-school sales doing better online than in stores (as Amazon leads the way), traffic and sales in the physical retail landscape have remained lackluster this summer. There have been winners, most notably Target Corp. and Walmart, but it’s been a challenging year-to-date period.

In its monthly report, RetailNext found month-to-month sales were “relatively flat,” with year-over-year sales declining just 0.3 percent — which analysts took as good news since flat sales are better than a steep decline.

These retail segments tout frugality and cater to pennywise shoppers. Dollar stores, in particular, are finding the right mix in a tough climate, which includes using demographic data to pick locations as well as rethinking merchandise categories. Dollar stores also key into the “smaller is better” trend where footprints rarely exceed 10,000 square feet — and this approach continues to gain traction across retail.

In AlixPartners’ most recent retail blog post, “Can Retailers Benefit From Consumers’ ‘Less Is More’ Mind-set?,” Zach Dribbon, vice president of the firm, said as the buying power moves into the hands of Millennials and Generation Z, “retailers must tune their sales growth and assortment strategies to better serve this new cohort’s values and lifestyles.”

In response, Dribbon said the resale market has exploded while retailers are also reevaluating their total brick-and-mortar offerings and focusing more intently on product diversity.

“But a more diverse assortment, even when it includes resale items, requires reevaluating how to better use the available physical space — whether that’s warehouses for digital fulfillment or brick-and-mortar stores for in-person customer service,” he explained. “And space can’t simply grow proportionately to assortment breadth — resale or new. In fact, retailers that are progressive in their thinking are adopting a ‘less is more’ mind-set when it comes to how much and what type of physical space they need to connect with and serve customers.”

Dribbon noted that retail footprints “that are nontraditional in nature are becoming more common.”

“Target, Whole Foods, Ikea and Sephora are among retailers aggressively growing their small-format stores and increasing their per foot profitability,” he said. “Target’s new stores, which can be a third of the square footage of the traditional size, have performed better than the overall firm average when it comes to comparable sales growth.”

Given these changes in size and scope of physical retailing, Dollar General has been a pioneer in the market. The company, which now rivals Macy’s Inc. in total annual sales (more than $25 billion), has about 15,600 units — 5,000 of which were opened in the past six years alone. Of the newer units, a smaller footprint was deployed.

On its most recent quarterly conference call, John W. Garratt, executive vice president and chief financial officer, said the retailer’s small box format ranges from around 7,200 to 7,400 square feet of selling space and comprises 6,000 of its total store base. 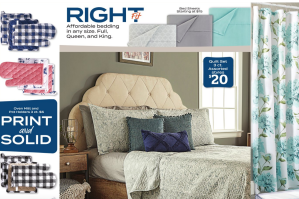 Dollar General has focused on expanding its assortment to include more home goods.

Garrett said the small footprint has allowed “us to go into even more rural areas of about 1,000 households, some more of a crossroad than a town, [where we] get some of our best returns. It’s allowed us to go into these fill-in opportunities which, I think, again provides white space that others don’t see.”

Part of Dollar General’s success has also been shifting the assortment. Over the past several years, the retailer has expanded its basics apparel offering as well as grown its home goods and beauty sections while adding more consumables.

And when it comes to the threat of a looming recession, Garrett is quick to respond with the retailer’s core strengths.

“I think one of the strengths of our business model is that it performs very well in all cycles of the economy, and we’ve seen that over time,” Garrett said in the analyst call. “In good economies, we do quite well. In not so good economies, history would say we do even better. And it really goes to making sure we take care of that customer, that we’re there for her in terms of price. And that’s what we’ve seen in the past.”