Changes include consolidated venues, and exhibits that are easier to navigate.

While location changes and calendar shifts mark some of the challenges facing women’s and men’s trade show markets this year, attendees will experience events that are more selective with categories and edited in a way meant to inspire buyers, and create a better flow.

There are also new exhibitors on deck at several venues, and a more global perspective, overall. For example, both [Pre] Coterie and Coterie will have a very large resort and international focus, according to Daniel Licata, president of Coterie and East Coast women’s wear.

She said [Pre] Coterie, which takes place June 9 to 11 at the Jacob K. Javits Center, “is a jewel box,” show and is about a fifth of the size of a regular Coterie. Some 325 exhibitors will participate in [Pre] Coterie. There will also be shows running simultaneously, such as Fame, Moda and Accessories the Show and Accessories Circuit, with many more exhibitors.

For Coterie, which runs Sept. 15 to 17 at the Javits Center, there will be a big emphasis on accessories.

“We are definitely seeing in the September marketplace, not only international and resortwear picking up, but a very large resurgence of people interested in accessories, not only jewelry, but hair accessories, new handbag resources and some pickup in resort footwear and other categories as well,” Licata said. “That’s being driven by the fact that accessories are really trending from a fashion perspective,” she added.

Licata attributed the focus on accessories to retailers who have been asking for more innovative accessories to add to their stores. They have found a good assortment from international and domestic resources, she said. Accessories are included within Coterie.

Licata said she doesn’t separate out the international resources and likes to mix them with domestic players. “It helps with buyer traffic and we like to merchandise not from where you come from but the type of product it is and the price point,” she said.

Overall, Coterie will feature close to 1,100 exhibitors. The September Coterie will also feature a Vintage section.

Coterie will once again do a special panel series, but the participants haven’t been confirmed. At last February’s exhibition, Coterie featured panels on influencers, digital solutions and subjects such as how to evolve the retail landscape.

Coterie launched a digital app at the last show, and it will continue to evolve to match brands with buyers. 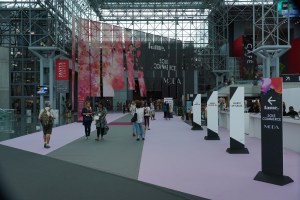 The entry of the Moda and Fame trade shows a the Jacob K. Javits Convention Center in 2018.  George Chinsee

For Fame, which has a slightly younger and more casual vibe, the spotlight will be on the latest trends in contemporary ready-to-wear apparel and accessories for women. Last winter’s vendors included companies such as Urban Outfitters, Asos, Lulus and Saks Off 5th.

Moda, which runs concurrently with Fame and three other shows at the Javits Center during the market, has upscale rtw apparel collections and accessories on display. Tribal, Hilary Radley by Katherine Barclay, Pia Rossini and Yochi were just a few of the apparel and jewelry companies present in February.

The other shows on tour in August are Project Women’s, for apparel and accessories, as well as accessory shows Accessorie Circuit and Accessories the Show.

All these events have carefully curated exhibits that showcase fresh designs meant to inspire buyers. At Designers & Agents, better known as D&A, the independent trade show has also cultivated a following for its selective assortment of designers and brands.

D&A stages shows in New York with 300-plus brands and in Los Angeles with 150 to 200 resources. Vendors come from the U.S., Europe, Japan and other parts of the world. Through a self-described “rigorous screening process,” organizers seek brands with originality, creative integrity and high quality. D&A’s distinct point of view and keen eye make it a key destination where retailers will discover fashion that will distinguish their stores from the status quo.

Recognized for its focused point of view in women’s rtw, accessories and lifestyle; each season D&A presents more than 300 brands from the U.S., Europe, Japan and around the world.

Independent goods, or i.g., is an initiative within D&A that showcases a selection of curated products and collections for rtw, accessories, beauty, wellness and decorative objects. For the June show in Los Angeles, independent goods will provide gifted space to select first-time exhibitors, affording them exposure to the fashion retailers that make up the D&A audience while introducing buyers to design-driven, thoughtfully selected products that can have a real and tangible effect on everyday lives. At the September and October shows, i.g. will provide selected brands an opportunity to exhibit within the Designers & Agents show in an open concept space that will not be gifted.

With the West Coast shows in general, the greatest shift taking place in the back half of this year is in Las Vegas.

UBM shows, which had previously been split between the Las Vegas and Mandalay Bay Convention Centers, will now be under one roof come August. The hope among trade show organizers is that, with the additional space at the Las Vegas Convention Center, travel time for buyers hopping from one venue to the next will be reduced freeing up more time to shop.

“The Las Vegas Convention Center expansion and renovation gives us the opportunity to unite all shows in a single campus, while allowing us to maintain distinct neighborhoods, where each community is merchandised together based on product category, which now includes footwear,” said Tom Nastos, chief commercial officer at Informa, which acquired UBM last year.

Project Womens, Stitch, PoolTradeShow and Children’s Club, along with FN Platform women’s and children will be housed in the North Hall. Project Men’s, MAGIC Men’s and FN Platform Men’s are being located in the Central Hall. Meanwhile, the South Hall will be occupied with fast-fashion footwear, WWDMAGIC and Sourcing@MAGIC.

The floor layouts were merchandised in a bid to further streamline the shopping process for buyers by keeping all categories across women’s grouped together and similarly for men’s wear, while fast-fashion and young contemporary also lay claim to their own designated area at the convention center.

Product development pros will find an emphasis on new technologies, including a mini factory built on the Sourcing show floor. More manufacturers hailing from Europe, in particular, Portugal, will also be seen at Sourcing in August.

There’s still more shuffling elsewhere in Vegas with Agenda and Liberty Fairs coming back to the Sands Convention Center after their February stint in downtown at The Pavilions at World Market Center.

For locals perhaps opting out of Vegas, interest regionally continues to build around the L.A. Men’s Market, which focuses on a select group of brands across contemporary, action sports, streetwear, accessories, footwear and lifestyle. The show is focused solely on summer and holiday, with the next slated for October and running concurrently with the rest of the L.A. market trade shows also taking place in downtown.

A deeper look into the men’s market and its runway shows reveals a segment that has been navigating through a series of challenges for the past couple of seasons — and it is continuing into this year as well.

Last week, the Council of Fashion Designers of America released its calendar for the men’s spring runway shows, and it’s anemic. Once filled with some 65 individual presentations or shows, this edition has slimmed down to around 20, most of which are part of Agentry PR’s New York Men’s Day on June 3. Several of the regulars, including Todd Snyder and Bode, are either skipping shows altogether or decamping to other cities such as Paris.

CFDA pushed ahead the men’s shows from July to June to coincide with women’s resort — and hopefully, garner more interest. But the move appears to have backfired. The dates are too early for a lot of brands and New York Fashion Week: Men’s has been losing momentum for years as the large American brands have declined to participate.

That also led to a loss of sponsorship for the shows, which was the final blow for a lot of designers who can’t afford to stage their own runway presentations.

A shift in dates has also resulted in challenges for the trade shows.

In February, a forward shift in dates by Project led to an unfortunate overlap between the trade shows in Las Vegas and New York Fashion Week: Men’s, forcing retailers and editors to make a choice on which to attend.

Project’s date change also impacted the other shows in Las Vegas as well. Liberty Fairs and Agenda were unable to secure their longtime home at the Sands Convention Center for the earlier time period and so took up space in large tents outside the World Market Center in downtown Las Vegas.

But things are back to normal — at least in terms of the dates — this time around with Project, Liberty and Agenda all showing Aug. 12 to 14. Liberty and Agenda have returned to the Sands, but now it’s Project that is on the move.