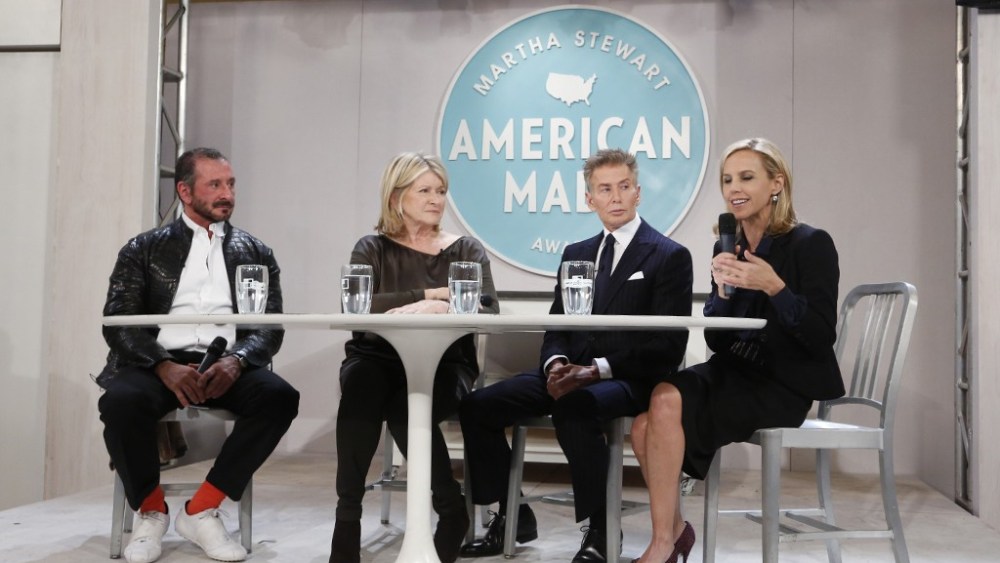 NEW YORK — The world is homogenized today and to make a mark, fledging entrepreneurs should seek to “be a contrarian.”

That was the advice from Millard “Mickey” Drexler, chief executive officer of J. Crew Group Inc., who was the featured speaker at a Makers of American Fashion presentation at Grand Central Terminal Wednesday morning. This was part of a two-day event at the commuter hub for Martha Stewart’s inaugural American Made Awards that celebrated extraordinary artists, artisans and entrepreneurs and the “innovative spirit” still evident in the U.S.

Following an early-morning yoga class, Stewart hosted a panel of American fashion luminaries that also included Calvin Klein, Ralph Rucci and Tory Burch. But she kicked off the discussion with Drexler. “My personal opinion about the world is that it’s homogenized,” he said. Drexler said he just returned from an overseas trip and found the “same look, the same goods and the same brands” everywhere. The “ubiquity” of products throughout the world means nothing is special anymore. “Today, there’s no aspiration because every high school kid has it,” said Drexler.

He said, years ago, brands such as Ralph Lauren or Calvin Klein were “always out of reach. Their clothes were always a little more expensive than I thought they should be.” But since he believes “good taste should never cost more,” he said he strives to provide special product at affordable prices at J. Crew.

He urged young people who believe they have a great idea to run with it and, regardless of the difficulty, stay true to their vision. “The best companies in the world are the most focused,” he said. He said he personally loves entrepreneurs and believes their products will find a home. “Customers love the scarcity.”

Klein agreed. “The most important thing is to know what you’re good at,” said Klein. He said when he was starting out, he focused on what he could do that was different. “In any creative field, if it already exists, nobody needs it.” He said he always kept the idea of the American woman in his mind when designing and didn’t think about the press or the money he could make. The same held true for his advertising, which broke new ground with its sensuality. “My intention was not to create controversy,” he said, but to simply “communicate what we stood for.”

Burch, who had no budget when she started out, communicated her message by using the Internet. “We launched e-commerce eight years ago, which was a bit of a risk,” she said, but one that ultimately paid off as customers discovered and embraced the brand. She said she continues to “learn on the job,” and strives to fulfill her customers’ needs.

Rucci said he was influenced by couturiers such as Halston and Balenciaga, and strives to stay fresh by always “remaining open to possibility.”

Klein summed it up this way: “In this business, you must be creative. Think about what they want and need and the business will grow and you’ll make money.”

On Tuesday night, Mayor Michael Bloomberg was on hand to help Stewart kick off the event at Vanderbilt Hall.

“I’ll never know my way around the kitchen like Martha does, but I do know how to get a business off the ground,” said Bloomberg, who joked that when he initially launched his company, his computer terminal crashed two seconds after he started, “but it worked out OK.”

Eleven companies, ranging from fashion and design to food and gardening, were recognized for their American-made products. The evening was cohosted by Stewart and NBC’s Willie Geist, and guests included Klein, Drexler, Thom Browne and Colin Cowie.

Klein, who was checking out the handcrafted goods, said he wanted to encourage new young talent. “It’s a good thing to encourage people to start a small business in the U.S.,” he said.

In his address, Bloomberg said New York City “is on course to create more new jobs than any year on record.” He noted that New York City created nearly 8 percent of jobs in the private sector this year. Since the recession, New York City has gained back two jobs for every job lost.

Honorees were Makie Yahagi of Makie (fashion); Andrew Tarlow, Jed Walentas and Peter Lawrence of the Wythe Hotel (design); Erika Allen of Growing Power Inc. (community); Alisa Toninato of FeLion Studios (crafting); Brett Binford and Chris Lyon of Mudshark Studios (crafting); Jonah Meyer and Tara De Lisio of Sawkille Co. (design), Lena Kwak of Cup4Cup (food); Andy and Mateo Kehler for Cellars at Jasper Hill (food); Flora Grubb for Flora Grubb Gardens (gardening), and Carter Cleveland of Art.sy (technology). The Audience Choice award, presented by Avery, went to Brian Howell of The Bee Man Candle Co. Howell will receive $10,000 to further his business and will be the subject of a feature in the December issue of Martha Stewart Living. In addition to Avery, the event’s sponsors were J.C. Penney, The UPS Store and Toyota.