Will There Be Drop-off Drama for Rent the Runway and WeWork?

The partners have both experienced issues with their separate businesses in recent weeks.

By Kathryn Hopkins
with contributions from Kaley Roshitsh
on October 10, 2019

A Rent the Runway drop-off station at a WeWork office.

At the beginning of the year, Midtown Manhattan workers returning their Rent the Runway clothes at a drop-off station in the lobby of WeWork Bryant Park were greeted by a small line of fellow customers of the clothing rental company. By the summer, that line had become so long that Rent the Runway had to add a second station and WeWork made available an even larger space for customers to wait so they didn’t block the entrance of the busy co-working space.

The goings-on at this one New York City location are symbolic of the explosive growth of the 10-year-old company, which now offers unlimited clothing subscriptions, and its increasing reliance on drop-off stations at WeWork offices as it seeks to make returning clothes as easy as possible for its reported 11 million members.

While Rent the Runway has some drop-off boxes at its stand-alone stores and a few Nordstroms, the majority are located in the lobbies of 19 WeWork co-working spaces in six major cities across the U.S., including New York, Los Angeles and San Francisco, for city dwellers too busy to mail back their clothes.

But since the partnership between Rent the Runway and WeWork was first revealed last October, significant problems have come to light at both businesses, each of which is at the forefront of the new sharing economy.

Rent the Runway’s troubles can be explained by the growing line at WeWork Bryant Park. Put simply, it became too popular and struggled to fulfill that demand.

On Tuesday, though, it seemed that it was back to “business as usual,” with a statement that its system upgrade was completed ahead of schedule. The upgrades were tentatively set for completion on Tuesday, but it was already “welcoming new orders and new subscribers,” Rent the Runway said.

WeWork’s problems are more complicated. Its parent, We Co., recently postponed plans for a highly anticipated initial public offering after investors poked financial holes in its official filings and questioned the firm’s leadership structure, leading to the ousting of its chief executive officer and cofounder Adam Neumann.

Throughout these issues, though, no drop-off stations were closed and, according to both companies, it has and will continue to run smoothly. “The partnership continues as normal and there are no plans for change. It’s been a great value add for our customers,” a spokeswoman for WeWork said. A Rent the Runway official followed up, insisting the drop-off boxes “will continue to be open, as we find many customers find returning directly to a drop-off box in our network the most convenient way to return.”

But what happens in the months ahead? Experts believe that with Rent the Runway appearing to have dealt with its issues for now, the future of that partnership will depend on the eventual fate of WeWork, which is trying to find investment and cut costs. An IPO was widely expected to lead to a $9 billion cash injection for We.

While some commentators are positive that WeWork can turn things around, others are less so. Scott Galloway, an author and professor at New York University who has been following the WeWork drama closely, falls into the latter camp. “We know for certain they’re going to have to dramatically reduce costs so I don’t know how that does not involve closing locations. I also think there’s a fairly decent probability there’s a bankruptcy,” he said.

Whatever happens, he thinks that Rent the Runway, the brainchild of Harvard Business School graduates Jennifer Hyman and Jennifer Fleiss, is more than strong enough to weather any potential storms, including if WeWork decides to shutter certain locations. 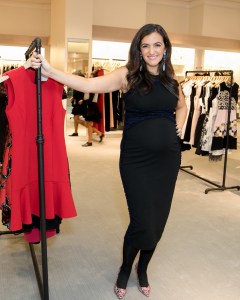 “I don’t see much contagion here. Rent the Runway is well capitalized and it’s well run. Any impact, I think there would be enough time to address it. I think it’s more fun and interesting and dramatic to talk about a domino effect but I don’t see it there,” he said. “Replacing those [drop-off locations] is a nuisance, but it’s not profound. It’s not damaging.”

Jan Rogers Kniffen, a retail consultant, was in agreement. “If they close a bunch of WeWork locations or the place folded up, would that be a negative [for Rent the Runway]? Sure. Would it be much of a negative? I don’t think so. Could they just use someplace else? Sure. It’s convenient. They need someplace that’s convenient. They don’t need WeWork, but I don’t think that is a very big part of their business anyway,” he said.

“They’re much different. The problem at WeWork is that nobody wants to loan money or invest in them, right? The problem at Rent the Runway is they’ve got so much business they can’t fulfill it. That is a problem, but it’s the kind of problem for retailers that is good to have compared to all other problems,” he said.

We’s woes — and just what they mean for the IPO market — could be a bigger headache for Rent the Runway. The dramatic retreat from such a high-profile company, which as recently as January was valued at $47 billion, has rattled investors and could cause many to reexamine the valuations of such new economy companies — including Rent the Runway.

The stock market is already volatile given the back and forth of the U.S.-China trade war and worries about a global economic slowdown. If valuation expectations are reset — as they are apparently being, given the We incident as well as tough going for the likes of Uber, Slack and Lyft —  it could make it more difficult for Rent the Runway to stage an IPO to access a broader pool of capital to help fuel its expansion.

But for now, the spotlight is on the office rental giant’s efforts to find its footing anew.

Keval Desai, general partner at InterWest Partners (which has invested in companies such as The RealReal, Cuyana, Canva and Optimizely), thinks WeWork will survive in some form going forward, most likely by focusing on a few attractive locations.

“In those cities, this will not impact Rent the Runway,” he said. “I don’t think the trend of short-term, on-demand office space is going away even if WeWork falters, so Rent the Runway will have options. In fact, in the short run, Rent the Runway might even be able to get some concessions from WeWork (and competitors) to continue their rental agreement.”

Rent the Runway certainly has options. It is expanding its store network and already has four drop-offs at Nordstrom stores in Los Angeles, so it could pursue more of those or forge deals with other retailers.

Partnering up with offices other than WeWork for drop-offs could be trickier, however. Last year, WeWork overtook JPMorgan to become Manhattan’s largest office tenant.

Rent the Runway Is a Unicorn With Growing Pains

Rent the Runway Competitor Speaks Out On What They Do Differently