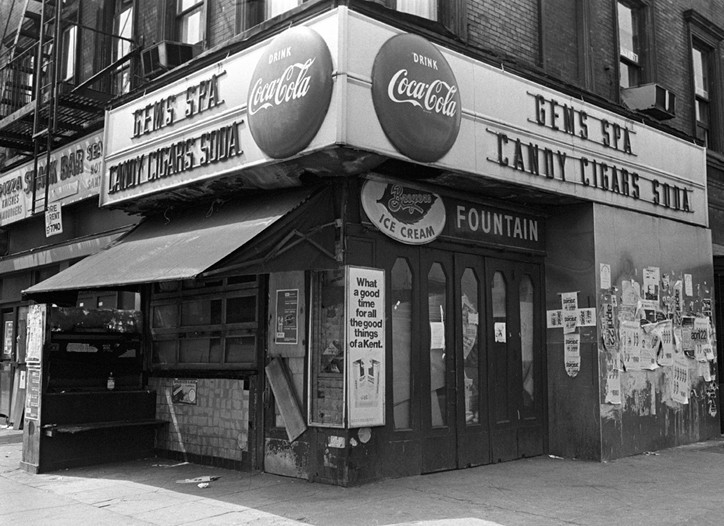 Over the years, WWD has acknowledged the “gritty and pretty” in East Village, detailing the neighborhood’s storied history as the “home of struggling artists, hippies, jazz musicians and punk rockers” and “serenity” seekers with the opening of a new candlelit yoga studio, for example, adrift the crazier decades whereby the neighborhood is of one “in transition.”

The retail persona of Manhattan’s East Village is one populated with small storefronts under apartments, eclecticism (and an echo of punk) still reigns despite vacant spaces. As for its residences, much of the neighborhood is defined by pre-war, tenement-style buildings and the addition of newer “boutique buildings” that are the antithesis to the high rises that define much of the Upper East Side. (Kind of punk)

“It’s really about the vibe and energy,” according to Marsha Essman, licensed real estate salesperson at Triplemint who finds a swell of new residents drawn to the neighborhood.

While more development is naturally underfoot, as Essman sees it, spending may be more consciously directed to the small business owners alongside a growing consumer trend toward localism whereby residents enthusiastically aim to support the local mom-and-pop stores, bars and haunts that make the neighborhood charming and eclectic.

And still, even some of the landmark establishments of the Village — more than 100 years old as is the case with family-owned Italian bakery Veniero’s — have clung on as New York City as a whole was subjected to gentrification and spit-shining of its edge.

A stamp store on East 11th Street keeps “East Village artist hours,” meaning when the door is not open, they’re closed, and open, when not closed — sometimes open “just for the hell of it.” (Totally punk)

It could be 3 p.m. on a Tuesday, and vintage shop East Village Vintage, in this case, is shooting video content for its Instagram at a local bar. With no artist hours, but artist prices and spirit, shop owner Maegan Hayward and employees are decked in sequins and toppling to-and-fro in platform shoes carrying a garish cocktail book from the Eighties as a prop.

The other prop is Snacks, a chihuahua wearing a bucket hat and muscle T-shirt, as well as actual snacks: a Trader Joe’s branded cheese puff snack.

Much of this speaks to the artistic spirit of the neighborhood, which at one point called Jean-Michel Basquiat a resident.

This same spirit was the impetus behind the blog, EV Grieve, started by an anonymous vigilante for the neighborhood who imparts local news, including closings and other activities. The blog was founded in 2007.

“I was tired of places that I liked closing with greater frequency,” the longtime resident (nearly 26 years) and East Village-based blogger said to WWD, who almost abandoned the blog after a successful campaign that kept two favorite bars from shuddering its doors — until author Jeremiah Moss of “Vanishing New York” (about urban gentrification) encouraged the upkeep and refined mission.

Citing escalating rents, changing demographics, higher labor costs and evolving consumer habits, “the unique storefronts that help make the neighborhood unique close, replaced by, say, global chains pedaling bubble tea,” according to the blogger, but who adds that “staying present” is best when change is inevitable in any neighborhood.

Of the punk closures that captured the neighborhood’s mourning over the years include: Manitoba’s, a punk bar opened in 1999 by The Dictators frontman Richard “Handsome Dick” Manitoba, which recently — and suddenly — closed this past June; CBGB (now a John Varvatos), which closed in 2006 with Patti Smith playing a final send-off concert. As for shopping, collectibles and vintage shops, there is Love Saves the Day, which closed in 2008 allegedly following the tripled rents. (The store is survived by its second location in New Hope, Penn.)

On the quirkiness spectrum today, the blogger places the East Village “somewhere between ‘Still Got It’ and ‘Still Hanging On,’” and “sometimes ‘Desperately Seeking Susan’ too,” a nod to the Madonna-fronted Eighties film that cameoed St. Marks Place in one of its heydays, and the more than 100-year-old newsstand Gem Spa.

Speaking of Madonna and Gem Spa, the 1957-founded newsstand and Village mainstay recently shifted gears under the new direction of Parul Patel, the daughter of the owner who is commandeering the business during her father’s sickness and making changes in spite of the neighborhood’s aversion to change as a whole.

The first of which is capitalizing on the business’ historic proximity — bearing the corner of St. Marks Place and Second Avenue — during the beginnings of the punk and rock scene that dictated much of the Seventies and Eighties — with none other than nostalgia. What was supposed to be a limited run of T-shirts branded with the black-and-yellow Gem Spa logo, were sold and then oversold, accumulating a waitlist for the shirt.

No waiting in anguish, Patel is quick to market the signature Egg Cream drink, (a combination of seltzer, syrup and frozen milk), as part of her continued focus on the strengths of the business as it looks to regain its cigarette and lottery licenses.

Another morsel to satiate the community’s appetite for nostalgia is achieved through local collaboration, inviting local artist-photographer David Godlis, who moved back to St. Marks Place in 1976 and has stayed there ever since.

Among praise for the photograph of Madonna outside of Gem Spa during the filming of “Desperately Seeking Susan,” Godlis is best known for his work photographing the CBGB through the late Seventies, to which 72 Gallery — located in Manhattan’s Lower East Side — aptly celebrated the birthplace of punk with a recent show, “It’s a Godlis World,” which ran from April through May.

Back then a clear identity of punk existed (and perhaps, slept on the benches of Tompkins Square Park after peddling secondhand wares), but what about now?

“Yes, I mean where else is punk? The beating heart of it happened right where we’re standing,” Godlis said to WWD, referencing the New York Dolls’ album cover shot outside of Gem Spa, in between signing prints while wearing none other than a Gem Spa T-shirt.

Others to knight St. Marks Place with album cover play include Led Zeppelin in 1975 with “Physical Graffiti,” (a tea shop, “Physical Graffitea” now marks the location). Over the mid-Sixties nightclubs such as The Dom or Electric Circus and venues such as Fillmore East dotted St. Marks Place’s storied heritage, but while Godlis photographed the East Village punk scene at its height, he believes “it still has an energy.”

As Godlis said, “It doesn’t have to be exactly the way it was yesterday.” And in 2019, the ethos of the Village is still sturdy enough to secure the neighborhood haunts and hangouts into the fold of new development — e.g. the locals staunchly avoid the Starbucks, Urban Outfitters and Targets of the area.

Opening in 2014, Superiority Burger is a relatively nascent vegetarian burger destination but has already attracted a following based on its regulars who seek what owner and chef Brooks Headley calls “cheap weird food.” To his credit, prior to opening the tiny burger joint, he held roles, such as executive pastry chef at prior fine dining restaurants.

But although dismissing the label of being “punk” in sentiment for abandoning the finer kitchens of life to downsize and price-drop, Headley (who has played in several punk bands since adolescence), does agree that the East Village today is all about “subversive culture.” And on another subject, that “frozen french fries are not punk.”

In the meantime, Headley avoids the “terrible people” of East Village, (applicable to any who are disorderly or drunk) and loosely admires the “terrible stickers” dotting the awning, (somewhat punk). He is hopeful the Superiority Logo he made by copying the Helvetica letters over and over will get graffitied over, so he can put up the new one (very punk).

Today, walking the streets of East Village, which is argued to stretch vaguely from 14th Street southward to Houston Street, which is the dividing line between East Village and Lower East Side, one will witness a mix of chain retail, mom-and-pop shops, trendy new restaurants and whatever else has made it.

Perhaps the most punk of the assortment would be those brandishing the title in their own web sites, including vintage “punk-rock” apparel and accessories shop, Search & Destroy, and Trash and Vaudeville which opened in 1975 on St. Marks Place to service the punk mainstays. One of the shops longtime employees later spun off and opened rock ’n’ roll clothing store I Need More in the Lower East Side.

Embodying a do-it-yourself aesthetic and certain aversion to popular culture, the new spirit of punk that is cultivated may be best observed in the youth today who host their own music shows at apartments, pop-up shops and experiment more with their wardrobes. Eclecticism in the form of newcomer pop-ups such as “Marfakind” coming to the East Village from September through October as what’s described as an ode to Marfa, Tex., while also mixing New York and Los Angeles aesthetics.

Each carrying a trash bag full of clothing, Braxton Landers and Manny Bordoy, stroll along East 11th Street toward the Buffalo Exchange. When approached by WWD, both gladly posed for a photo. The young men were flipping thrift from Goodwill for a profit at Buffalo Exchange as a “hobby.” (Definitely punk)

“The one thing you have to remember is it’s always now, it’s always today,” as Godlis said. And today, at least for today — East Village is still punk. But really, as with its iconoclastic artist hours, it’s whatever the hell it wants to be.

Le Bon Marché Goes All Punk With a Streak of Pink

The Motley, Multidisciplinary Gang at The Standard East Village