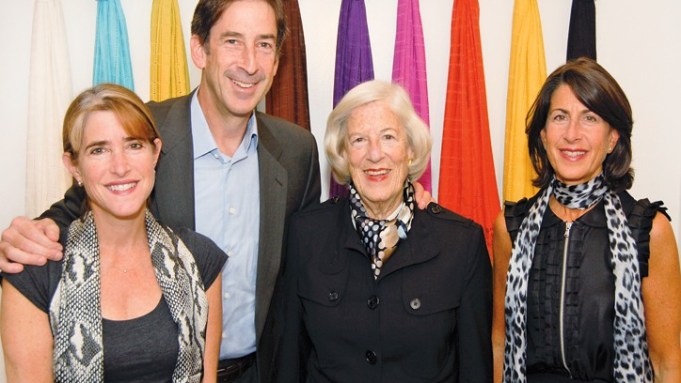 Dorothy Roberts likes to say that she has three children: daughter Lynn, son Steven and Echo, the design company that her parents founded 85 years ago. Certainly, as chairman of the New York-based design mini empire, she likes to keep it all in the family: Steven is the brand’s chief executive officer and president, and Lynn is the vice president of advertising and public relations.

When Echo was first started in September 1923 by newlyweds Theresa and Edgar C. Hyman, it made a small selection of scarves that it sold to stores such as Saks, Marshall Field’s and I. Magnin. In the eight-plus decades since then, Echo has gone on to have a combined staff of 170 in New York and at a distribution center in New Jersey, and its various offerings are available in some 3,000 to 4,000 doors nationwide and another 500 globally. In addition to scarves, which continue to be a staple, Echo makes puffy nylon jackets, rainwear, hats, wraps and leather gloves. There is a comprehensive home line that extends to duvets and pillow shams, table linens, paper napkins, ceramic soap dispensers and shower curtains. The brand’s core products are priced anywhere from $38 to $200 at retail. And the one unifying element among all these seemingly disparate categories: the vibrant and eclectic prints that have always been at the heart of Echo.

“We’ve always said that our brand is about print, pattern and color,” says Steven Roberts. “We’ve always woven our products into this kaleidoscopic design, and everything else grew out of what we were good at and what we enjoyed. We mix patterns and colors and brushstrokes, and engineer them into interesting and compelling designs.”

To commemorate the company’s anniversary, Echo has launched a new ad campaign that will carry through to next spring. The ads, which first bowed in The New York Times in August, focus specifically on the prismatic nature of the prints, and are more about the overall aesthetic of the line than any tangible product.

“It’s really all about the design, and how it’s interesting and different and unusual,” says Lynn Roberts. There is also a redesigned Web site, echodesign.com, which was launched a few months ago to coincide with the release of the company’s third home decoration book, and plans for a series of personal appearances and trunk shows with key retailers are planned throughout the rest of the year. In short, after 85 years — at least half of them spent working in licensing deals with brands such as Polo Ralph Lauren, Ann Taylor and Talbots — the company is looking fresher than ever.

“We love newness, and much of the innovation here is inspired by what’s happening around the globe, through music, films, the streets,” says Steven Roberts.

That explains the wide retail mix. Echo products are available at Nordstrom and Bloomingdale’s, as well as at trendy boutiques such as Shop Intuition and Kitson. Internationally, the company sells at Harrods in London and Le Bon Marché in Paris, and is seeing a spike in business in Japan. On the agenda are new accounts in Hong Kong, China, Singapore, Taiwan and Australia.

Despite the economic downturn, Steven Roberts says that business is up about 6 percent this year over last. “It’s challenging, but when times are difficult, we develop more, do more, take more risks,” he says. “We innovate as much as we can. These days, we don’t cut quality. We reinvent.”