A challenging retail landscape is forcing brands and retailers to consider nontraditional types of partnerships.

McKinsey & Co. describes its pop-up as a "store of the future."

Last August, Le Tote inked a deal to acquire the Lord & Taylor brand — along with its intellectual property, digital sites, inventory and 38 remaining stores. All for a seemingly paltry $75 million in cash.

It was a deal that caught some by surprise. A rental subscription service scooping up a legacy department store brand? Then, in September, global consultancy firm McKinsey & Co. said it was going into the pop-up retail business at the Mall of America with its “Modern Retail Collective” — showcasing beauty and lingerie.

Earlier this month, Simon Properties Partners said it entered into a joint venture with Rue Gilt Groupe. In the deal, Rue Gilt’s web sites will keep their individual identities and be operated separately while Simon’s ShopPremiumOutlets will transition to be under the operations of Rue Gilt. And earlier this week, Target Corp. said it was teaming with the owner of the Toys ‘R’ Us brand to relaunch the company’s e-commerce site, ToysRUs.com. Toys ‘R’ Us, prior to its bankruptcy, was a direct competitor to the toy departments of both Target and Walmart. 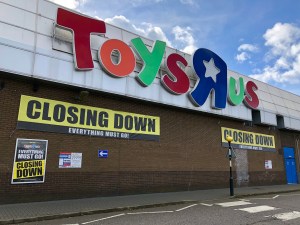 A liquidation plan shuttered 730 Toys ‘R’ Us stores in 2018, and investors later scooped up the brand name and web site.  Shutterstock / photocritical

At first blush, these deals and investments might seem counterintuitive to some. But industry experts, analysts and solution providers expect more of these types of marriages down the road as the convergence of online and physical stores drives opportunities (as well as challenges) in fashion, luxury, beauty and real estate.

“Businesses today are looking for ways to join forces so they can gain new audiences, new assets and new capabilities — this is what’s driving a lot of these surprising deals,” Head told WWD. “But rather than viewing the world through the binary lens of build or buy, I believe we’ll start to see more nontraditional partnerships take place: partnerships in fast fashion — multiple brands selling in one location, for example; more place-based partnerships like returning Amazon purchases at Kohl’s locations, [direct-to-consumer] products being sold in brick and mortar retail stores.”

Head said these “marriages” or partnerships “are intuitive in the sense that the companies involved share an audience and create added value for the consumer.”

Meyar Sheik, founder of Certona Corp. and president and chief commerce officer of Kibo, said with the Simon venture, both companies “see an immense multibillion-dollar opportunity to address the outlet mall consumer.”

“By leveraging Rue’s online presence and e-commerce infrastructure, Simon can offer its brand and retailer tenants another channel to sell their merchandise and also generate an incremental revenue stream through e-commerce,” Sheik told WWD.

With Le Tote and Lord & Taylor, Sheik said the retailer has been “struggling like many other apparel retailers and Le Tote is in the high-fashion rental business. Rather than having to mark down unique, seasonal and trendy dresses that don’t have enough demand and eroding margins, Lord & Taylor can now make those dresses available on Le Tote for rental.

“This leverages their combined customer base and also helps protect their margins by getting more revenue per each rental dress versus marking them down and selling them at a discount and eroding the Lord & Taylor [brand],” Sheik explained.

With the McKinsey pop-up, Sheik said pop-up stores have traditionally “been a cost-effective and more nimble way for brands and retailers to test market products or better understand particular geographic market dynamics.”

“Pop-up stores are also particularly advantageous to specialty retailers with seasonal concentration,” he added. “A good example is one of Certona’s clients, Spirit of Halloween, who opens pop-up stores all over the U.S. before every Halloween. McKinsey is using these stores as a testing ground for their retail clients to get more customer feedback and market intelligence, but to also test drive new product launches and evaluate new digital and in-store technologies.”

Sheik said the information and data culled from the pop-up has immense value to McKinsey’s clients, “and it mitigates their risk by not committing to a full launch of new products or technologies and by not having the overhead of a larger and more permanent store footprint.”

Ritu Trivedi, global client lead at Mindshare USA, said these recent deals are being driven “by an understanding that bricks and clicks do need to coexist in order to provide a holistic solution for the consumer.”

“In the past, the retailers that were big in the traditional sense wanted to build their own e-commerce capabilities and most of them failed miserably,” Trivedi told WWD. “Similarly, the new generation of DTC brands that have been built via clicks are beginning to realize that they need to have retail outlets because the consumer still wants to ‘experience’ shopping.”

But there are hard lessons to learn. Trivedi said retailers and brands in the past that have failed, “or are taking a page from someone else’s book are realizing that they can’t always build out from scratch the e-commerce or traditional retail business.”

“As a result, you’re beginning to see these unions that give them the ability to hopefully move fast and create some competitive advantage along the way,” Trivedi said. “The McKinsey opportunity seems very different. It’s an interesting business for them to lean into and what they are doing is bringing data to life in retail. This will be interesting to watch.”

Trivedi said, in general, the players in these deals tend to “have an eye on the short term but are also trying to build something that will have resilience in the future. These are not short-term bets; they’re the right bets that give them an opportunity to build a unique consumer experience with their brand, anywhere and everywhere the consumer demands.” 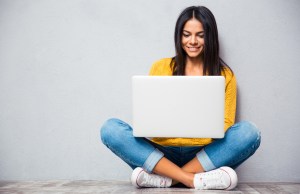 Millennials shop online, and in stores as well – especially with the same brand.  Shutterstock / ESB Professional

Carlos Castelán, managing director of The Navio Group in Minneapolis, said it’s important to understand that the digital convergence occurring has created a “unique dynamic” in the market. “Despite the fact that e-commerce has grown rapidly over the last decade, physical stores remain the predominant shopping channel for customers at roughly 90 percent of all retail spend,” Castelán said. “As a result, companies have taken note to get creative in finding a way to create a more seamless online and physical experience.”

Castelán said pure-play e-commerce brands are now recognizing “the power of stores as both a way to connect more deeply with customers and as a more effective alternative to the rising cost of acquiring customers online.”

“With rising customer acquisition costs, and physical stores able to provide a stickier and more resonant customer experience, it would not be surprising to see more e-commerce players purchase brick-and-mortar retailers particularly as there continue to be more store closures,” Castelán added.

For some, these deals are simply part of the natural evolution of modern retailing — and as a way to stay competitive and relevant. Lisa Kalscheur, chief marketing officer at Monetate, said retailers and brands in the “Amazon era” are compelled to build loyalty along with higher-quality experiences.

“Brands, merchandisers and technology companies are all merging because that’s the only way to deliver an immersive, personalized experience for consumers wherever they want to shop — and to acquire new customers,” Kalscheur told WWD. “The companies that are acting on this vision might seem like they are making unusual choices, but they are in fact aggregating the necessary assets to get in-store, digital, and even DTC alignment to be competitive in the coming years.”

Coye Nokes, retail and consumer partner at OC&C Strategy Consultants, agreed. “Retailers and brands are positioning their businesses to follow the evolution of the consumer and the consumer journey,” Nokes said. “A few key trends are major drivers of recent partnerships and M&A: multichannel consumer journeys (online/off-line); and rental and re-commerce (resale).”

Nokes said the Simon and Rue Gilt Groupe deal is “an example of an off-line player moving to create a multichannel model and participate [more significantly] in e-commerce; this is the same trend behind partnerships, M&A and off-line expansion for other players.”

Notable “clicks to bricks” brands include Glossier, Bonobos and Rockets of Awesome, among others. With rental, the Le Tote deal “gives access to physical space and an inventory,” Nokes said, adding that this segment is seeing a lot of action — most recently Urban Outfitters’ launch of Nuuly.

With re-commerce, Nokes said traditional retailers such as J.C. Penney and Macy’s are teaming with ThredUp to enter the physical space. “While the activity takes different forms (M&A, partnership, business expansion), it is largely driven by the need to meet changing consumer demands and businesses working with others to adapt and leverage existing business models and assets,” Nokes said.

For retail analyst Kathy Haan of FitSmallBusiness.com, these types of deals and partnerships will continue to grow and flourish — especially as online shopping continues to expand and satisfy the convenience demands of consumers. “In some instances, orders can be delivered within an hour,” Haan said. “Brick-and-mortar retailers are recognizing some of the best impulse purchases happen at the click of a button, and they want to cash in on these opportunities. There’s less overhead in the e-commerce space, since you don’t have to pay for a storefront.”

When asked about future deals, partnerships and acquisitions in the age of digital convergence, Amazon rose to the top of the list.

Trivedi believes Amazon “is going to make a similar move in fashion as it has in grocery by buying Whole Foods. They need to build that credibility in the traditional retail world for their offering.”

For Sheik, it is easy to “envision Amazon and other digitally native brands” embracing the omnichannel “shopping paradigm and partner with complementary brick-and-mortar counterparts.”

“Imagine if Amazon offered shopping kiosks and/or booths at all the airports as well the option for customers to pick up their merchandise at thousands of existing retail stores within all the airports,” Sheik said. “There can be countless creative and accretive combinations like this which help fuse the digital and physical worlds, offering new market opportunities and providing more choice and convenience to consumers.”