With publishing jobs more unstable than ever, editors are cashing in on the reported $6.5 billion influencer marketing sphere, making as much as $1,000 for a single Instagram post and $10,000 for a brand campaign. Enter: the editor-influencer.

“Note to bloggers who change head-to-toe, paid-to-wear outfits every hour: Please stop. Find another business. You are heralding the death of style.”

This was the collective thought of Vogue editors in September 2016, when they took to the Internet to “discuss” that season’s Milan shows in an article titled “Ciao, Milano! Vogue.com’s Editors Discuss the Week That Was.” The editors sprinkled in digs at the bloggers throughout, prompting backlash from the targets — including Susie Bubble, Bryanboy, Danielle Bernstein and Shea Marie — now known as influencers.

The article became fodder for an early editor-versus-blogger narrative, one further dramatized by the realities of a declining publishing industry and a burgeoning — and more profitable — influencer one. But that script has since flipped as magazine editors and their employers are now working hard to cash in on the influencer space. Editors at major publishers such as Hearst and Condé Nast are dedicating more of their efforts to growing their personal social media followings. Some are even cashing in on the reported $6.5 billion influencer marketing sphere, making as much as $1,000 for a single Instagram post and $10,000 for a brand campaign, according to market sources.

Those numbers are small in comparison to what celebrities such as Kylie Jenner — who, according to Hopper HQ, earns $1.26 million per Instagram post — can generate. But the movement is indicative of a sea change in the media landscape. Enter: the editor-influencer.

“The rise of the editor-influencer symbolizes a group of mostly younger people who came up in a post-publishing boom or post-Golden Age of magazines,” said Phillip Picardi, editor in chief of Out Magazine, former editor in chief of Teen Vogue and founding editor of Them. “[They] are most likely making smaller salaries than their predecessors and are taking more ownership of the fact that their following and their influence is something that they bring to the table. It’s not just a one-way relationship as traditional publishing would lead us to believe.”

The legacy fashion and beauty media industry at large has been on a downward spiral in recent years. Ad revenue for magazine publishers in the U.S. saw a significant decline last year, with ad spending in print magazines falling by 18 percent year-over-year, according to data from eMarketer. Media industry job cuts nearly tripled in 2018, making it the worst year for jobs in media since 2009, according to a study from Challenger, Gray & Christmas Inc.

These factors are contributing to a toppling media environment that stands in stark contrast to the thriving world of influencer marketing. With Instagram, YouTube and other platforms readily available at their fingertips, editors at a variety of publications are moonlighting as influencers. And, according to Beca Alexander, founder and president of influencer agency Socialyte, editor-influencers are “in higher demand” than other influencers.

“[Editor-influencers] do, a lot of the time, happen to be more expensive because they not only see themselves as more of an authority in the space, they’re also busier, so their time is more valuable,” she said. “They usually won’t work with brands that are in some capacity working already with their publishing entity so that it’s not a competitive situation. A lot of times, timelines are more difficult for them…but they are in higher demand.”

The rise of editor-influencers is not only a byproduct of the media’s molting process, it coincides with an influencer space that is seeing increased demand from brands for “real people,” aka “male and female professionals who just happen to have a social following,” said Alexander. But with editor-influencers, there’s a question of ethics that may not necessarily be at play for other professionals: How can editors remain unbiased in their magazine or editorial work if they are accepting pay — or free product and trips — to promote a brand on their social media platforms? 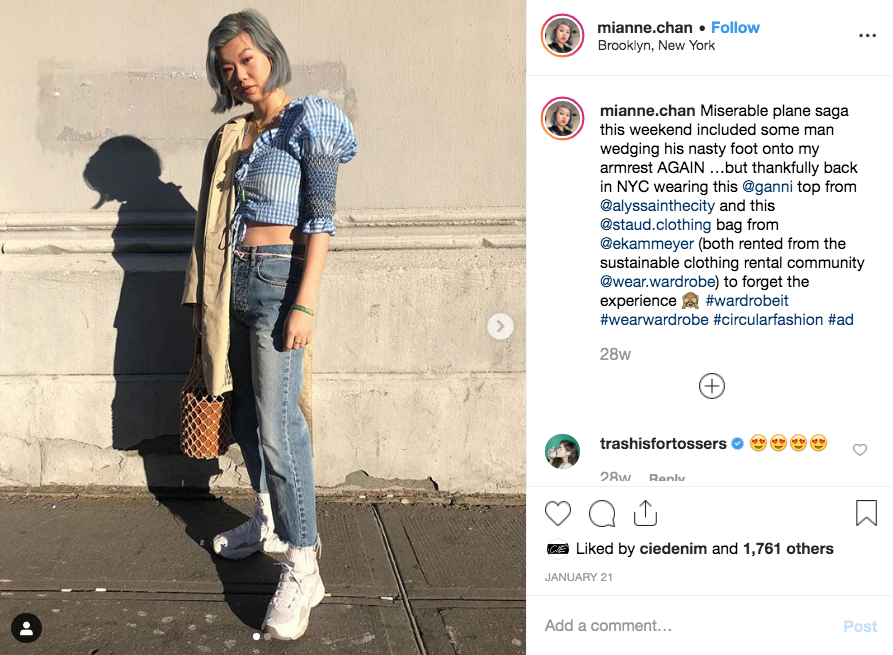 “Let’s first point out the hypocrisy of this question,” said Picardi. “In the magazine world, what goes unsaid is that multiple brands pay enough money in advertising to make demands [for] cover credit, to be featured in multiple places, to even demand certain profiles. This is not a new phenomenon that is being introduced into fashion — this concept of who’s biased towards what brand.”

It’s no secret that fashion magazines and brands long ago breached the wall of church and state, with brands not only expecting but demanding a certain number of mentions or fashion credits in glossies in exchange for their ad dollars. But what was once a breach has since become a tearing down, with numerous sources saying many well-known fashion titles will only shoot brands if they advertise.

Julie Schott, former Elle.com beauty director who will soon launch her own beauty brand, Starface, said she sees no difference between editors’ participation in paid sponsorships and “the old-school ways of advertising.”

“I don’t think being paid by a brand negates the authenticity of your support of that brand,” said Schott. “It’s not a conflict of interest to collaborate with a brand that you genuinely support whether it means creating content with them or doing a larger project and being on contract. That’s the nature of this business at this point.”

“It’s a fuzzy line,” said Alyssa Coscarelli, a former Refinery29 editor who left to become a full-time influencer. “Aritzia is a retailer we would include regularly in shopping roundups on Refinery, which is what I primarily did because I was the market editor. Aritzia would also come to me and do sponsored posts with me on my Instagram. It was great to be able to use that relationship in both ways, for me personally, but I also think that could look a little fishy if I’m posting about Aritzia and then the next day, Aritzia’s in my story.”

The Federal Trade Commission does not have special regulations for editor-influencers — or for other influencers, though it did begin cracking down on influencers by reminding them to tag sponsored posts accordingly in 2017. According to Michael Ostheimer, an attorney with the FTC, its guidelines call for, in basic terms, very obvious disclosures when there is an exchange of money or goods between a brand and an individual who then promotes it.

“If there’s a connection between an endorser and a product, and people seeing the endorsement wouldn’t know about the connection and it would matter to them in evaluating how much weight or credibility they give to the endorsement, then the connection should be disclosed clearly and conspicuously,” Ostheimer explained.

“We tell influencers to err on the side of caution,” said Mamie Kresses, another FTC attorney. “If there’s a likelihood that a significant minority of your followers wouldn’t know that you’re being paid, then you should disclose it. Unless it’s abundantly clear, then we recommend disclose it.” 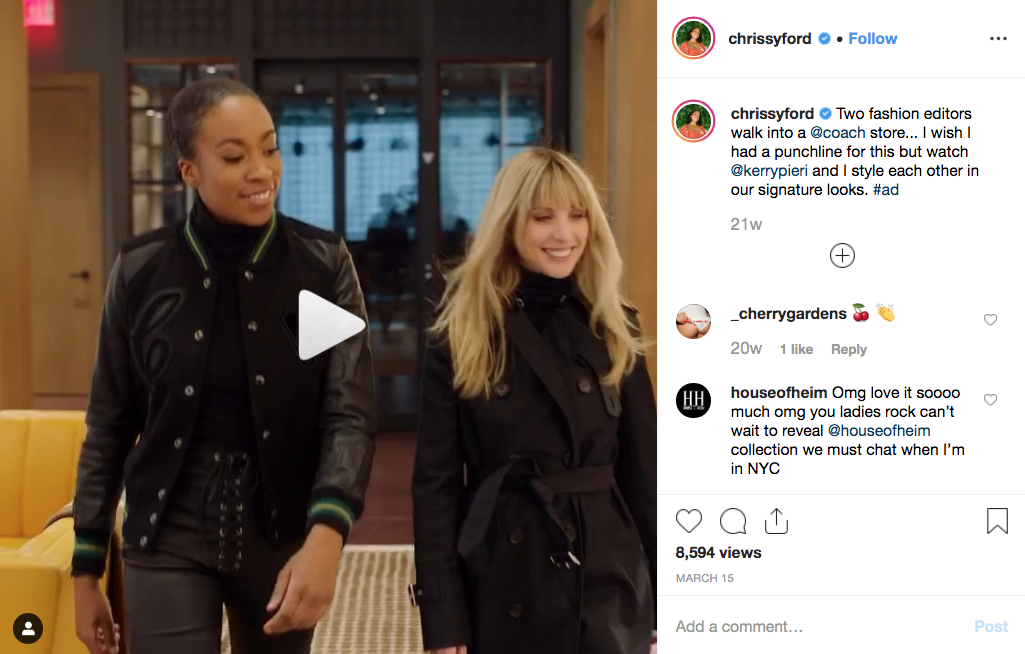 Disclosure also applies to gifting, an area a lot of editors and influencers seem to think of as a workaround of the FTC guidelines. “People may understand that a fashion editor is given free products to review in her magazine or her magazine blog, but may not understand if she posts about a product using her personal account that she got it for free,” said Kresses. “It could potentially be misleading.”

While some publications lack a definitive answer to the question of whether editors should capitalize on their influence, others have developed internal processes for facilitating editor-brand relationships. Of the big three magazine publishers, Meredith Corp. declined to comment and a representative for Condé Nast did not respond, but at Hearst, editors have the option to choose whether to participate in a campaign, according to Kate Lewis, chief content officer of Hearst Magazines.

“In some ways, it’s no different than deciding what to cover,” wrote Lewis via e-mail. “Do we feel the product lives up to its promise, delivers value and service to the reader, is fun and interesting? Then we’re in.”

Refinery29 has a business division called the Talent Collective through which editors can participate in brand partnerships. The Talent Collective has teams in both New York and Los Angeles and is led by Natasha Vaquer, vice president of talent partnerships and influencer strategy, and Dana Stern, vice president of talent relations and casting, who was previously the executive entertainment director for Marie Claire, Cosmopolitan and Seventeen.

“The Talent Collective works with external talent, primarily, but they also work with internal talent as well,” said Amy Emmerich, Refinery29’s chief content officer. “That’s not a mandatory thing, though. If someone meets the requirements of a certain amount of followers and they’re interested in working with the Collective, it’s something we offer as an opportunity.”

Refinery29 editors who work with the Talent Collective are paid a flat fee depending on the kind of post, according to Emmerich.

With their publication’s blessing, editor-influencers can make anywhere from $200 to $1,000 for a single post on their Instagram feeds and $5,000 to $10,000 for brand campaigns, depending on follower count and engagement. Lauren Chan, a model and former editor at Glamour Magazine, said she is earning more now as a full-time influencer than she did as a full-time editor and part-time influencer at Glamour.

Coscarelli of Refinery said she puts “more effort and energy” into her influencer career simply because it pays better.

“It’s frankly far more lucrative and more inspiring to me, more empowering for me, more fulfilling for me to build something that is my own that could help outlast whatever happens with publishing,” she said. “I’ve signed with an agency [Estate Five] to help me manage all these projects. I’m launching my own blog this summer. I have a lot of design collaborations coming up… But I feel for my friends who only are doing freelance writing and trying to put a roof over their heads. I’m pulling teeth for $150 for a story and that can’t even compare to the influencer industry and the rates there.”

The editor-influencer trajectory may be lucrative, for now, but much like magazine publishing today, becoming an influencer is not necessarily a key to career longevity. In fact, the two may even be more similar than some influencers realize.

“Is this bubble gonna pop any day now?” Coscarelli postulated. “It doesn’t really feel like a safe bet, but ultimately, that’s the direction I felt I had to go because of how much money was in it. It seemed like the safe bet and at the same time, I don’t feel super stable in it, as if it’s a safe bet compared to publishing. Let’s see how long this lasts.”