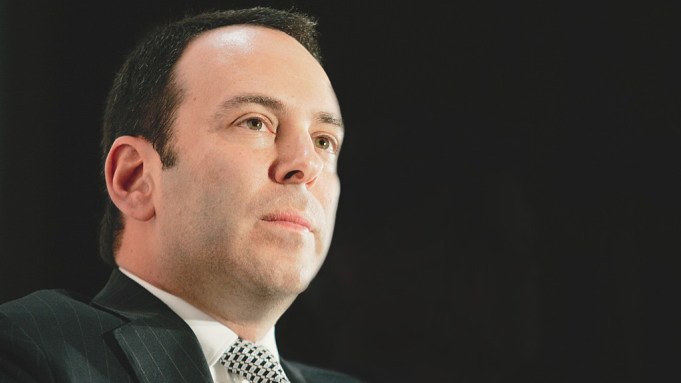 Time appears to be running out for Edward S. Lampert.

Lampert is chairman and chief executive officer of Sears Holdings Corp. and chairman of ESL Investments, which holds a 48.4 percent stake in Sears. Last week he faced a blow when Goldman Sachs pulled $3.5 billion out of ESL, cutting the funds ESL has under management by more than 60 percent and, as a result, reducing his stake in Sears to below 50 percent since part of the payout was in Sears stock.

On Friday, Lampert had to once again shuffle Sears’ assets in order to bolster the ailing retailer’s balance sheet. The hedge fund manager is spinning off Lands’ End, making that division a public company once again. No word yet on the future of Sears Auto Center business, which the company has been considering divesting to raise further funds to keep Sears operating.

Even after the latest spin-off, Lampert will still have 48.4 percent of Lands’ End and there is little doubt he and his investors have profited handsomely from the Sears investment. While the shares Friday closed down 3.78 percent to $48.09, that comes off a high during Lampert’s ownership that was once $195.18, when the stock rocketed as Wall Street applauded the financier’s asset sales and other moves.

As part of his financial wizardry, Lampert in 2006 transferred ownership of Sears’ Kenmore, Craftsman and DieHard brands to KCD, a bankruptcy-remote entity. The entity now charges Sears a royalty fee to license the brands. The $1.8 billion securitization bond deal, backed by the brands’ intellectual property, was then sold to a Bermuda-based insurance company that is also a Sears subsidiary, according to a source familiar with the transaction.

Lampert’s previous sales of Sears assets and store closures include: Sears Canada’s sale of eight properties last month for $300.3 million; Sears Hometown and its Outlet business was spun off in 2012, raising $346.5 million from a rights offering and garnering a $100 million cash dividend from Hometown, and its Orchard Supply Hardware Stores unit in 2011 was spun off as stock to shareholders. Spin-offs aren’t always a sure thing for investors, at least those who invested in Sears. Some investors are said to have received their return in the form of stock in Orchard Supply Hardware Stores in June only to find themselves holding worthless stock when Orchard filed for bankruptcy protection a week later.

Some observers have always believed that Lampert’s purchase of Kmart and Sears was less about retailing and more a real estate play, despite Lampert’s protests over the years that he has been working at initiatives to change Sears’ retail image.

While Brian Sozzi, ceo and chief equities strategist at Belus Capital Advisors, said of Lampert’s merchandising skills, “a Sam Walton Eddie Lampert is not,” one retail credit analyst was just as quick to say, “Eddie’s done a good job of creating shareholder value. Everybody’s made money on their investment.”

Still, there now is the growing realization that whatever shareholder value Lampert’s been able to garner for investors has come at the expense of the future of the Sears and Kmart nameplates. Then there is the impact on the rest of the industry, such as Sears’ vendor suppliers and their employees, when the operation can no longer sustain itself through good old-fashioned cash flow once the key assets have been sold.

Looking ahead, there have been rumblings in the real estate market that Sears Canada isn’t for the long haul. Sears Canada recently said it will close its flagship at the Eaton Centre in Toronto, considered by many a top-notch location. That move, among others, has led many to believe that Sears Canada is likely to completely disappear as more of the real estate gets sold off and competition from U.S. retailers gaining a foothold in Canada intensifies. Most of the retailer’s more valuable real estate in Canada, according to these individuals, has been sold off, leading to speculation that Sears Canada will eventually, like other Sears Holdings, become extinct.

James Schaye, ceo of asset disposition firm Eaton Hudson, said of Sears, “They are slowly becoming irrelevant. What’s left is just the real estate assets. He still has enough good ones to last a few years. This company is not going away tomorrow, but it will slowly fade away into the sunset. It is a slow monetization of assets. Eventually there will be a bankruptcy filing.”

Sozzi said, “This is a liquidation. There’s still time. The real estate assets will be monetized to keep the lights on at the stores, but over the next three years from today, this company has to start generating cash from operations.”

Sozzi is one of those who believes the plan from the get-go, when Lampert acquired Kmart, was a real estate play. “If you go back to his start at Kmart, he has not been a true merchant. There’s a disconnect here at how to run a merchandising business,” he said.

One big question is what’s left of the real estate locations and whether there are enough good locations in the B and C malls to get some value back. Andrew Graiser, copresident at A&G Realty Partners, who declined to speak of Sears specifically, said of the department stores in general who occupy those anchor positions, “The interesting part is that some of these big-box leases are old leases at low rent that go out for a long time. These leases also contain clauses that give the tenant much control over the center and the space. There are many developers looking to redevelop the space and are offering money to take over those locations.”

Graiser explained that the space that the department stores occupy could easily become entertainment centers in the mall housing restaurants and theaters, while an add-on development becomes the new home of a junior retail anchor. He also noted that this process takes time since new permits would need to be secured to convert the retail space into mixed-use spaces.

Allan Ellinger, senior managing director at advisory firm MMG, said of the vendor community, “Everybody’s concerned because right now there’s a great deal of uncertainty.” He noted that the concern has been centered on the future of Sears and its rival J.C. Penney Co. Inc. He pointed out many vendors, branded and private label, would have a hard time finding a way to make up the volume that would be lost if either of the two retailers was to shutter a significant amount of stores or go bankrupt.

Ironically, the scuttlebutt in the marketplace is that Sears seems to be losing market share in apparel purchases to J.C. Penney, now that Penney’s has been promoting heavily over the last several weeks and because many of the brands that were unavailable at the chain, such as St. John’s Bay, are back.

When Sears reported third-quarter earnings last month, Lampert said it is focusing its business to a “member-centric integrated retailer leveraging Shop Your Way to benefit from the landscape.”

According to a Sears spokesman on Friday, Shop Your Way has “10s and 10s of millions of members.” He provided some statistics, noting that the “number of members shopping four-plus times in the past 12 months shows a positive trend” and that the retailer’s “online and multichannel sales increased 17 percent over the prior year.”

The spokesman also said of Lampert’s plan for Sears: “Our transformation is centered on our Shop Your Way members. Our priority is on building relationships with our most loyal repeat customers regardless of where or how they shop. We’re shifting Sears Holdings from a business that has historically focused on running a store network into a business that provides and delivers value by serving its members in the manner most convenient for them: whether in store, in home or through digital devices. We are driving this transformation by investing in capabilities to enable members access to the broadest possible assortment of products and services, enhancing our membership benefits associated with SYW, developing digital and social relationships with our members, using data and analytics to make targeted offers and decisions delivered in real time and expanding our reach through marketplace and delivery options.”

Although the company has been criticized for not reinvesting in its stores, the spokesman said, “We invest hundreds of millions of dollars every year in the member experience.”

“The merchants and the people running Sears have ideas about what they want to do, and they can never execute,” said one major supplier. “There’s a lot of good people at Sears that were formerly with Macy’s West and Mervyns. But the money is restricted. They can’t be aggressive with anything.

The source did say that Sears has been focused on building up its e-commerce, while there’s no sense that other parts of the retail operation are being fueled for growth. While e-commerce seems to show some life, “I do know the brick-and-mortar is suffering,” said the supplier. “The stores look bad. They are not willing to invest in them.”