Unlike in decades past, designers are not racing to publicize dressing political figures.

By Rosemary Feitelberg on September 4, 2020

In these tumultuous times, the current U.S. election season is understandably issues-driven to the nth degree. The coronavirus crisis has gripped the world in varying degrees, causing massive unemployment and seismic affects on the economy. As a result, designers dressing politicians and their spouses don’t appear to be touting those associations to the same degree as in the past.

Unlike in decades past — when Nancy Reagan’s fondness for Adolfo and James Galanos, Barbara Bush’s friendship with Arnold Scaasi and Jackie Kennedy’s alliance with Oleg Cassini — first ladies and other political figures no longer align their wardrobes primarily with one designer. Michelle Obama, for example, earned praise from the fashion industry for supporting a bevy of designers and labels — established, on-the-rise and even retailers such as J. Crew. Just as consumers are now more familiar with the myriad label choices due to social media and online shopping, so, too, are politicians.

Prior to the Trump administration, designers would readily speak on-the-record after a first lady or political figure wore one of their creations. In these highly divisive times, that no longer is the case. After Jill Biden wore a double-breasted Brandon Maxwell dress to deliver her speech at last month’s Democratic National Convention, the designer declined an interview request through his spokeswoman.

Another New York designer noted that Biden’s choice of more of an everyday dress was fitting, since she was speaking from a high school classroom where she once taught. Noting how the proportions of this year’s Democratic and Republican party conventions were different, he said, “When you go to a big Broadway musical like ‘The Lion King,’ you know it’s going to be a big, lavish, lovely production. But then suddenly you have to do it off, off, off Broadway in a little theater on Christopher Street…”

Democratic vice presidential nominee Kamala Harris sported a Prabal Gurung pantsuit for her acceptance speech at the DNC. Harris, who is known to wear Converse sneakers on the campaign trail, wore the same pantsuit less than a week later for another key appearance. 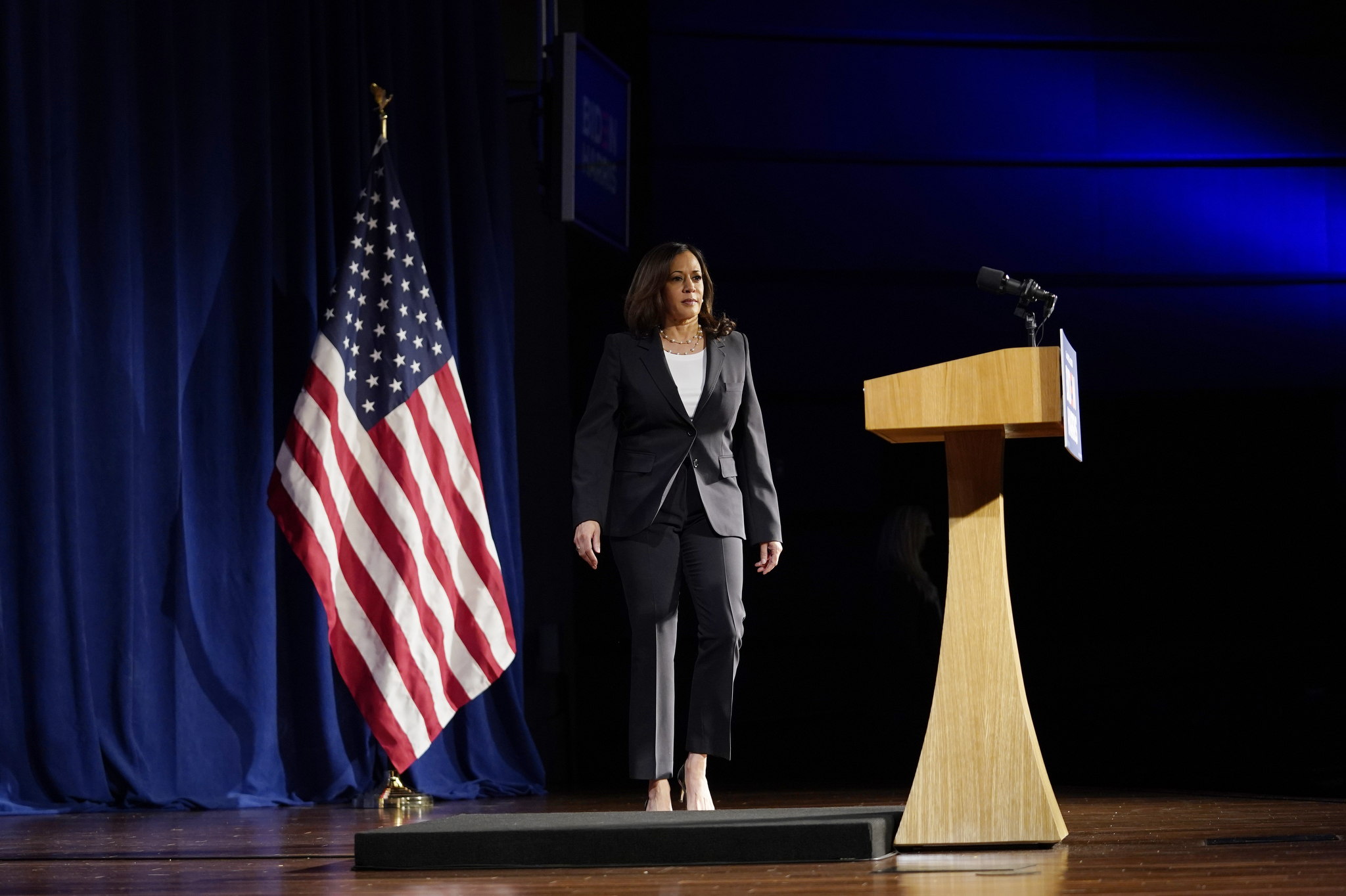 A spokeswoman for Gurung said simply that, “We were thrilled and honored to see Senator Harris wearing Prabal Gurung.” But the designer was unavailable to participate in an interview, she said.

Having served as second lady during the Obama administration’s two terms, Jill Biden knows the inner workings of the political world. In addition to her Brandon Maxwell dress, she donned a short-sleeved black Ralph Lauren dress for another night during the DNC.

Indicative of how some high-profile political figures and their spouses no longer feel compelled to wear their respective party’s signature colors, Biden wore a short-sleeved lilac dress on the DNC’s final night. Melania Trump was equally bold in her color choices for the RNC when she wore a neon green Valentino dress for the final night, which drew numerous social media comments as well as press coverage trying to determine the meaning of the choice.

The first lady is known to work with the designer and stylist Hervé Pierre in selecting styles for primetime photo-ops. Pierre is a familiar face to managers in many Madison Avenue boutiques, where he often shops for Trump and pays retail.

Designer Chiara Boni’s collection appeals to consumers of both parties — as is the case with all companies, whether they like it or not. Blue Staters Cara Kennedy Cuomo and Kyra Kennedy have attended one of the designer’s La Petite Robe runway shows, as have Red Staters Lara Trump and Kimberly Guilfoyle. The direct impact of having an influential person wear the brand is difficult to measure based on sales and site traffic, Boni said.

Social media is another story. ”Opinions can be both positive and negative. In this world of social media, a brand with a public platform must be ready to expose itself to the feelings of the clients and the followers, and stay committed to maintain and upholding its own brand values,” Boni said.

While some consumers may assume that a designer who dresses a political figure supports that person’s party, that is not always the case. Boni said, “I dress all women — of any size, race and religious orientation. Some are Democratic and some are Republican. I dress women so that they feel empowered by my clothes. There are women in politics who are very supportive of the brand, but I don’t align myself with any sides/parties. I feel that designers should be free to make political statements and not just sartorial ones.” 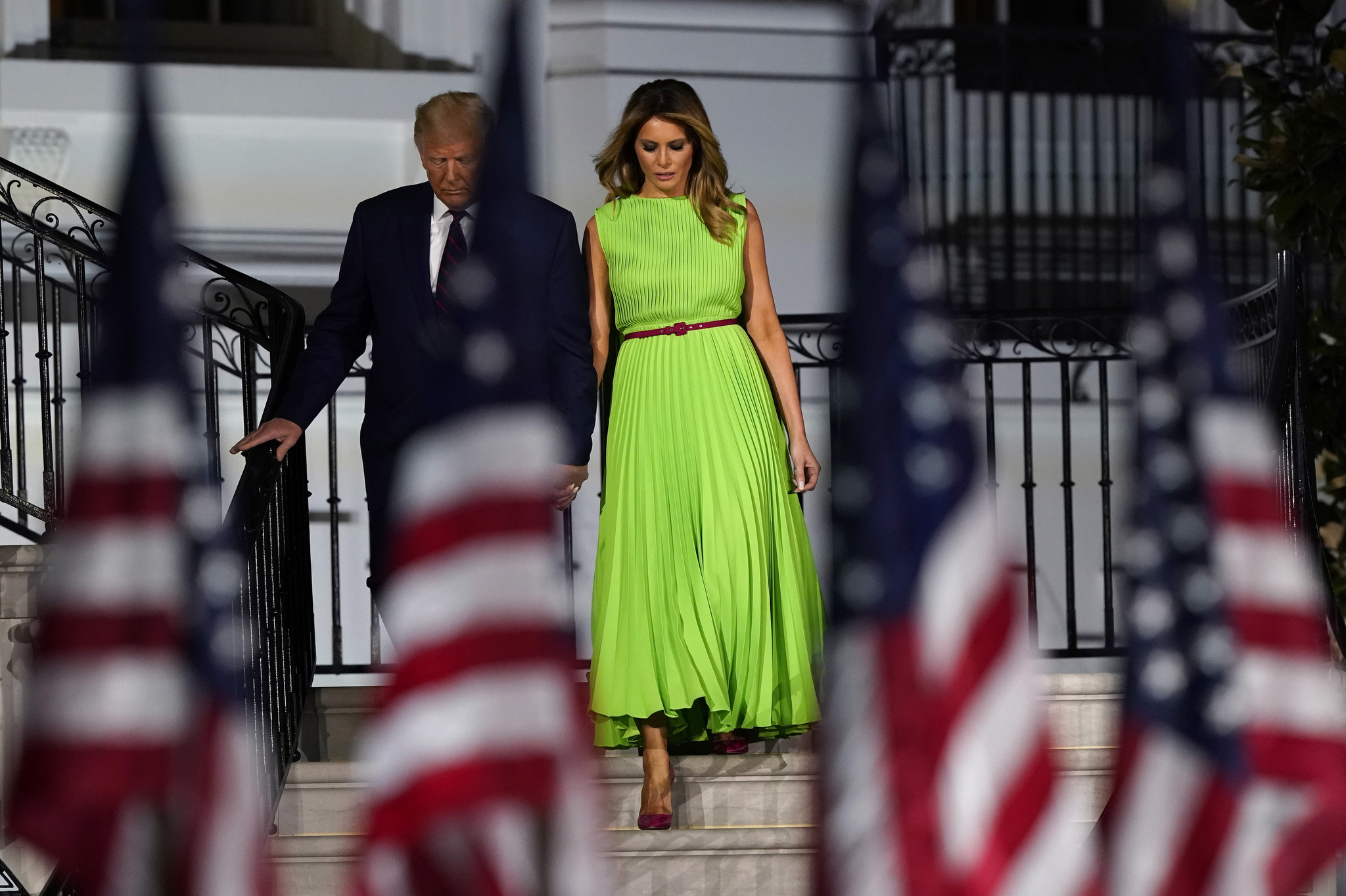 Democratic or Republican — regardless who designers dress, there seems to be some backlash, a few said. “It’s all become too controversial now,” said one New York designer, who has dressed high-profile figures in both parties and who requested anonymity.

As for how doing so can boost sales, the designer emphasized that the world with all its problems is “in a different place.” Asked about the impact of different designer choices worn at the recent DNC and RNC, he said, “There are so many other things happening that it makes the clothes seem a little secondary.”

The pandemic, of course, has challenged consumers and the fashion industry in myriad ways. The aforementioned designer said, “People are staying at home whether they’re in Connecticut, Massachusetts, Maine or the Hamptons. That has changed when you get dressed up and how you look.”

While brands and designer houses no longer tout any political ties, style choices still drive interest. After FLOTUS wore a sleeveless, micropleated neon green dress on Aug. 24 at the RNC, searches for “lime green dresses” increased by 400 percent in six hours, according to the global fashion search platform Lyst. Her choice of a $2,450 khaki green Alexander McQueen jacket and a $890 pencil skirt — worn to deliver her 28-minute speech earlier in the week at the convention — increased searches for Alexander McQueen by 106 percent in 48 hours, a Lyst spokeswoman said. Both items have since sold out.