The former ceo's strategy, if it had worked, would have reinvented modern department store retailing. 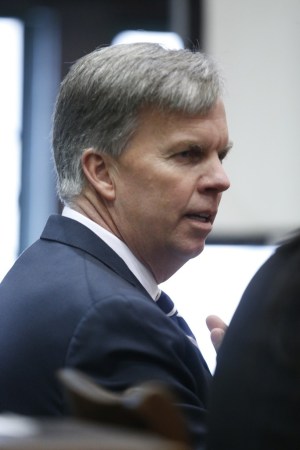 New Round of Funding Brings Klarna to $45.6 Billion Valuation

What Does It Take to Launch a Fashion Brand?

Ron Johnson’s strategy for J.C. Penney, if it had worked, would have reinvented modern department store retailing.

This story first appeared in the April 11, 2013 issue of WWD. Subscribe Today.

It was audacious, iconoclastic and long-term in its attempt to modernize the retailer’s image, store design and merchandise and cut all the coupons and price promoting. But the former Penney’s chief executive officer was ousted on Monday, leaving the company in a tailspin, struggling to recapture lost customers, and with a potential business school case study on how not to manage a public company.

Even William Ackman, whose Pershing Square Capital still owns 17.8 percent of Penney’s and who had brought in Johnson, eventually turned on him. Ackman, though, on Wednesday told WWD he has no intentions of selling out. “We’re not going anywhere,” he said.

Now others are dissecting Johnson’s tenure — and the autopsy isn’t flattering. Industry experts on Wednesday continued to skewer Johnson, his management approach and hasty reinvention, and speculated on Penney’s future. Still, some were surprised Johnson was ousted so soon, before results on all the new spring merchandise could be weighed.

“My guess is the numbers had to have been so bad,” said one retail ceo, who requested anonymity.

A few sources said some of Johnson’s innovations at Penney’s could survive — shops-in-shop for brands like Izod, Levi’s and Liz Claiborne; some of the newer contemporary merchandise like Joe Fresh, and the revamped home department with exclusive brands, reflecting an attempt to modernize and to some extent upscale the presentation. Right now, for Myron “Mike” Ullman 3rd, the new ceo, it’s all about stabilizing the company, assessing the incoming product, raising morale and reevaluating the marketing. To a large extent, he’s stuck with much of Johnson’s imprint, and merchandise at least through part of fall.

Sources also said Penney’s has been “burning through cash” and has been seeking to raise more, possibly through private equity.

“None of us want J.C. Penney to go away,” said a men’s wear supplier who, like most of the two dozen or so executives interviewed for this story, requested anonymity. “But Johnson was right in a lot of ways. He just didn’t do it the right way. If you invest in your stores and fill them with better product, that’s definitely the right way to win. But you can’t just flip a switch. He alienated his old customers without having any new ones. He should have done a slow rollout.”

The executive said that Penney’s merchandising staff this week indicated plans to move back to standard “MSRPs and regular promotions, which is good for all of us.”

“He was onto something, with his intention of bringing in fresh, more exciting product, becoming more competitive and contemporary like Target, and creating a point of difference,” explained Gene Pressman, a former co-ceo at Barneys. In the late Sixties and Seventies, Barneys reinvented itself from a discounter to an upscale designer store, but did it slowly and methodically, Pressman noted. “As a merchant, it’s all about product and service and ambience. He was definitely moving in that direction.” But with any reinvention, “there is a risk of eroding your customer base.”

Pressman said Johnson’s long-term vision for Penney’s was doomed for a couple of reasons — too much knee jerking by Johnson, like hiring and firing Michael Francis, the marketing executive, and pricing reversals. More significantly, running a public company put Johnson “under the scrutiny of stockholders and people that are not necessarily merchants,” Pressman said. “They are not waiting around. They only care about one thing — the stock price,” which plummeted during Johnson’s short tenure.

“It takes probably a year just in the planning to get the [new] merchandise on the floor, and it takes seasons and seasons until you fully effectuate the vision. No matter how much marketing you do, it doesn’t take hold until word of mouth kicks in, when there starts to be a buzz. That takes time and you have to have investors that are confident in you and have patience,” said Pressman.

“The level of investment Johnson was making was so significant, either the board wasn’t aware how long it takes to see the payoff, or boards don’t give ceo’s a tremendous amount of time,” said Karen Harvey, ceo of Karen Harvey Consulting Group. “You have to really say, ‘What Ron was doing, was it going to pay off in the long run?’ There’s a big question there.”

“Bringing in Ron Johnson was a bold move on the board’s part,” said Sydney Finkelstein, the Steven Roth Professor of Management at Dartmouth’s Tuck School of Business and author of “Why Smart Executives Fail.” But what the board, obviously dazzled by Johnson’s success running Apple Retail, might not have considered was that for Johnson, as Finkelstein said, “Merchandising was not in his bones.

“Johnson moved really fast and cut back on what customers expect in terms of sales and couponing,” added Finkelstein. “He didn’t bring in the new customers he was hoping to get, and he upset the older customers.”

“He was never a soft goods merchant,” said one retail industry investor, who requested anonymity. “He had no regard or respect for anything that company did. He ignored his customer base, his employee base. You don’t ignore the talent in the company even if it needs to be turned around. At Apple, he was on a rocket ship that was going to the moon. Steve Jobs was really the chief architect of the Apple stores, but it doesn’t matter. With Apple products, you could sell them whether they’re in a beautifully designed Apple store or a shanty.”

“If Penney’s only had their own version of the Apple iPod in apparel. Guess Penney’s overlooked that key to the strategy, or never really understood they needed to create product with the consumer in mind — not the board of directors,” an innerwear executive said.

“I’m not going to say all of Ron Johnson’s merchandising ideas and content were inappropriate,” said Arnold Aronson, managing director of retail strategies at Kurt Salmon. “Certainly, it’s a positive to develop new and attractive brands for the Penney’s customer. But maybe it’s no longer about 100 shops,” which is how Johnson envisioned reformatting the selling floor. Aronson suggested “a more incremental” rather than sweeping approach to changing Penney’s and believes Ullman must restore Penney’s “perception of giving a deal.” He characterized Ullman as “analytical and cool-headed” and said he would first assess and try to stabilize the business, try to boost worker morale and examine capital expenses, including the high costs of shop-in-shop build-outs, as well as advertising.

“One of the major turnoffs was the pricing model” that Johnson created, Aronson said. “Penney’s has to refamiliarize customers with what worked before,” he said.

“Ron was brilliant in the exposition of bringing in ideas,” added Andrew Jassin, partner in Jassin Consulting Group. “For example, the Genius Bar at Apple is a great idea, where trained employees can offer advice and tips, and he took that idea to Penney’s. Giving free haircuts to kids on Sundays is brilliant,” said Jassin, referring to another Johnson tactic used for awhile to lure shoppers.

“He was brilliant, but his lack of knowledge of what brings people into retail stores was tantamount to this failure,” said Jassin. He said getting Levi’s, Li & Fung and Georgina Chapman to buy into it was impressive. He thought Penney’s could be something that competes more directly with Macy’s, though people shop by coupons and promotions. “Everybody in the country wants a deal, whether it be Lord & Taylor or Best Buy, they buy at a discount.”

Bud Konheim, ceo of Nicole Miller, which has a line at J.C. Penney, said, “First of all, Ron Johnson came [to Penney’s] when we were in a cultural revolution. The catalyst was the Internet. It was ‘Out with the old, in with the new.’ That’s the mood everybody was into.”

He said when Johnson saw Sephora generating $600 a square foot in Penney’s while the total store did just $200, he realized, ‘“What’s wrong with this picture?’ He figured people don’t like to shop in a sea of stuff. They like boutiques. He built the whole case around boutiques. I don’t think anybody faults the idea, but the execution was a shock to the system. Evolution in methods are acceptable. Revolution is not. It was a gambler’s misstep.”

“Ron was very charismatic, a great seller, very verbal and so what? He didn’t engage the organization. He did the whole thing and never tested a damn thing, and the last time I checked we are in a people business and a product business,” said the retail ceo. “He wasn’t able to change the product. Let’s say some of his concepts were correct. He didn’t test anything. He didn’t ask anyone about them. He just said, ‘This is the new plan.’ As a ceo, if you drop 2 or 3 percent, as a ceo, you say, ‘What the hell is going on?’ But Penney’s dropped 25 percent. It’s staggering. They’re burning through cash. My gut is the March numbers were so disastrous,” triggering the change in command.

Marc Bohbot, ceo of Bisou Bisou, also sold at Penney’s, said,   “I have to tell you that at the beginning I thought it was a great vision, but the way it has been executed was a little bit too fast.” Still, he believes Johnson’s in-store shops need to be sustained. “The numbers at those spaces that have been reconfigured and redesigned are doing well. Definitely, this is the way to go.”

For Penney’s to turn around, he said, “We are going to need a good two years, but I really believe in it because the core team is great.…We have seen at Bisou Bisou a reduction [in sales], but not as bad as the general numbers, so we are confident to keep going.”

“Ron Johnson had a pretty interesting, cool concept with the shops,” said Antony Karabus, president of Hilco’s SD Retail Consulting Practice. “But the new brands didn’t compensate for what was found to be lacking. Take a woman who’s got a $50,000 household income. There isn’t a lot of money, but the kids need jeans. Do I want 75 percent off like it used to be? Or walking in and seeing jeans for $24.99 and not knowing whether or not that’s a good deal. People still look for a flyer or an insert with a good discount.”

According to Maggie Taylor, vice president, senior credit officer at Moody’s, “Liquidity may have contracted in the first quarter more than anticipated. It also creates a heightened uncertainty around JCP’s go-forward strategy (both short and long term). Thus, we believe this announcement [on Ullman joining the company] will not solve JCP’s near-term earnings pressures. In fact, we are concerned that JCP’s return to coupons and a more promotional selling strategy may negatively impact first- and second-quarter operating margins while the company works to reprice its private-label merchandise.”

Johnson’s departure “does raise concerns regarding corporate governance and how activist shareholders may impact strategy,” Taylor said in a research report. “We had presumed that Ron Johnson would have been given enough time to complete the rollout of the home shops before the board of directors would make any decision regarding his future role. Thus, the ceo change at this time appears abrupt and is likely a signal that JCP’s performance so far in 2013 is weaker than anticipated. However, JCP’s near-term liquidity remains adequate, albeit likely contracting.”