With fuel from Capri Holdings and a fresh focus on bags, Choo wants to become a global accessories brand.

LONDON — Jimmy Choo’s journey to billionaire brand has begun in earnest and the road ahead is paved with strappy sandals, crystal-studded sneakers, and a collection of day bags bearing the first, new JC logo in more than two decades.

Roughly two years after the brand’s purchase by the-then Michael Kors Holdings, now Capri Holdings, Jimmy Choo is firing up its handbag business, running with sneakers — glittering styles more fit for the red carpet than the race track — and building its wider community, online and off-line, via new projects, collaborations and pop-up shops.

Thanks to Capri, owner of Michael Kors and Versace, Choo has the funds to nab a model the caliber of Kaia Gerber, the headspace to ponder its brand values, and the investment in new designs — such as the new logo and collection of day bags known as the Varenne.

As M&A deals go, Choo has won a jackpot and now it’s out to make its purchasers prouder — and richer — by ramping up to $1 billion in revenue from nearly $600 million today.

With 10 to 15 percent annual growth, it shouldn’t take that long, but both the luxury and accessible luxury markets for accessories are growing ever-more crowded. Kering and LVMH Moët Hennessy Louis Vuitton are putting more firepower behind their big logo businesses, while Choo’s fellow British brand Burberry has set an aggressive plan to push into accessories for men and women.

Add to that mix the small, indie, designer-led brands that are undercutting their luxury peers on price.

In a joint interview, Choo’s chief executive officer Pierre Denis and chief creative officer Sandra Choi laid out the brand’s strategies and aspirations — and argued that some of the hardest work, such as the retail rollout, has already been done.

Jimmy Choo has 215 stores worldwide, with plans to eventually ramp that number up to 300. About 75 percent of sales come from retail, with the remainder from department and specialty stores.

“Now we want to be a global accessories brand,” said Denis, who’s been at the helm of Choo since 2012, and who helped to take the company public on the London Stock Exchange in 2014 under former owner JAB Holdings.

Shoes currently make up 75 percent of the Choo business and accessories 25 percent. Denis sees that split becoming 50-50, and said the brand already has two distinct product and design teams for each category. 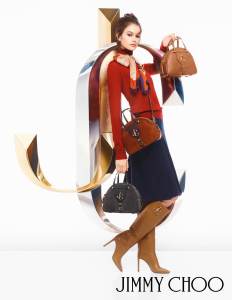 The strategy right now is about putting more “excitement” into Choo, and into the products, expanding the ranges “and delivering to a new customer audience. It’s about products, products and products,” said Denis from the boardroom at Choo’s slick headquarters near Victoria Station here.

Denis also stressed that it’s a boon to have a parent with a long-term vision: For most of its history, Choo has been owned by private equity, which usually has an exit window of three to five years. Those companies pumped up sales and made the principals — and Choo management — richer, but there was no long-term commitment.

JAB purchased Choo as part of its ambitions in the luxury space. It eventually gave up on the sector, selling off Choo, Belstaff and Bally, although it plans to retain a minority stake in the latter after the deal closes with buyers Shandong Ruyi.

“There comes a time when a fashion brand has to move to an entity that has a bit of a longer-term vision, a knowledge of the industry and the capacity to put money into investments. That is where we are now,” Denis said.

Choi, a niece of the brand’s founder and namesake Jimmy Choo who has been with the company almost since its inception, put it another way: “Capri deals in the same business as we do. We don’t have to spend time explaining ourselves because we speak the same language.” With private equity, she said, “you spend most of the time explaining why you do things a certain way.” 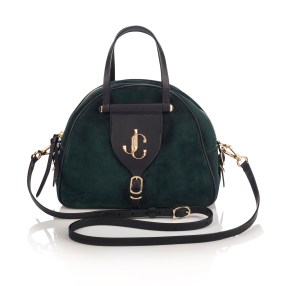 Indeed, Capri’s chairman and ceo John Idol was always clear about why the fashion group purchased Choo for $1.2 billion, a hefty enterprise value multiple of 17.5 times. The company, he said at the time of the deal, “doesn’t need to be reengineered. It needs to have additional resources to grow more quickly.”

Choo was de-listed after its purchase by Capri and has since been a big growth driver for the fashion conglomerate, most recently notching a 28.7 percent increase in sales to $139 million in the fourth quarter.

Last month, Idol said Capri’s goal is to get Choo above where it historically peaked, “which was around 10, 12 percent operating margin. We want to be in the mid-teens, high teens, and accessories will be the cornerstone to that.”

Choo has long been one of luxury’s most democratic brands, appealing to a broad demographic with its classic, glamorous styles. It has sidelines in men’s and women’s fragrances, under license from Interparfums, and eyewear collections in a partnership with Safilo.

Although it makes silk scarves, leather belts and a smattering of streetwear styles such as a puffer, T-shirts and hoodies, there are no current plans to launch into full-on ready-to-wear. 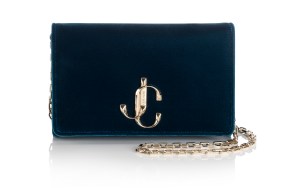 The Varenne clutch in velvet, part of a new handbag franchise from Jimmy Choo.  Karen Bengall

Instead, Choi has been focusing on branding, creating a new logo that can be manipulated and colored in myriad ways and also turned into a repeat pattern. The first logo products will hit shop floors in July with the fall 2019 collection, while the logo itself features big in the fall ad campaign, which features Gerber for the second time.

Asked why the company even needed a new logo, given the brand’s double-digit successes over the years, Choi said Choo is “slowly and surely transforming into a brand, a proper brand. You want to make sure the designs that are significant get marked. It’s a question of ownership.”

It took Choi and her team the better part of two years to create the JC logo, and she said she didn’t want it to look like anyone else’s. Shiny and sculptural, it stands out from others in luxury.

“For me, when you open your eyes, you can see ‘strappy,’ the letters kind of intertwine with one another. I’ve always said we deal with strappy sandals, we’re feminine and glamorous. And I always say Jimmy Choo is like a jewel, a multifaceted jewel. Those key elements are reflected in the shaping and finish of the logo. That was the birth of it. And it’s not a one-time thing. We want to live with it,” she said.

Starting this fall, the brand will begin promoting the new logo via a series of pop-up shops at retailers including Harrods, the Dubai Mall, Tsum in Moscow and Isetan in Japan. Choo has created clouds and chandeliers using the logo, encouraging customers to look at the brand from a different angle.

The logo figures big on the new Varenne bag, which is handmade in Italy by six different artisans. The company sees the Varenne as the foundation of its day bag business, and crucially it comes in a variety of sizes and shapes, although the bowling bag version, with detachable straps, is the hero. 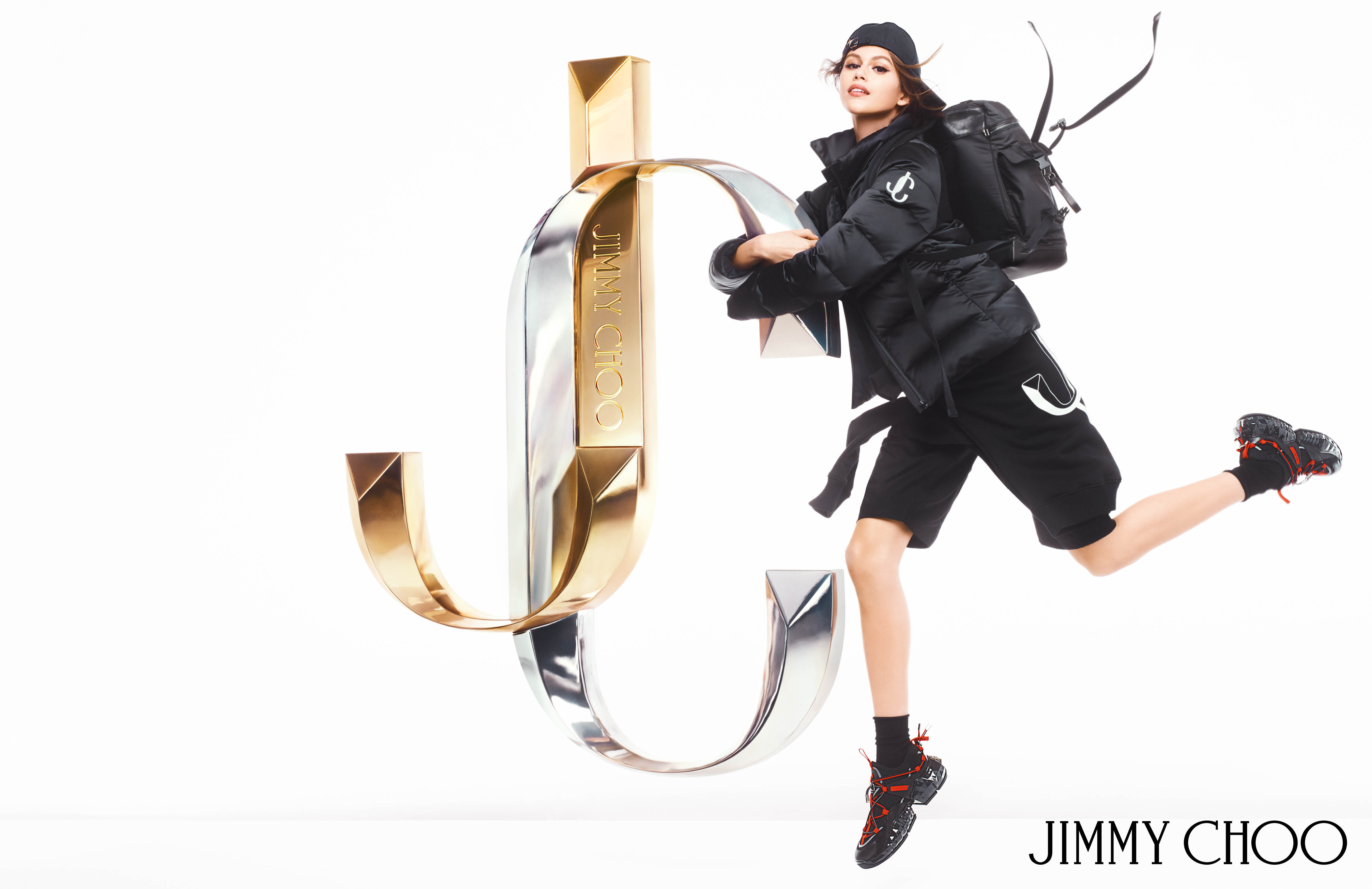 Younger women have started buying smaller bags, and Choo wants to cater to that trend, too. “If you think about the smaller bag, it’s also more affordable, and everybody can actually have a piece of it,” she said. Prices for the Varenne line range from about $995 to $1,600.

Sneakers, too, are becoming a big part of business, and Choo principals are flummoxed by the fact they’re actually producing them. They’re even having trouble keeping them in stock.

Over the years the brand had slowly been integrating sneakers into its offer, but when Choo released the Diamond trainer in October last year, it was a game-changer.

“We were doing heels for the last two decades, and all of a sudden the trainer was taking shape and we couldn’t ignore it. We had to do something about it. We came up with Diamond — and it’s winning,” said Choi, who designed the bling-iest sneaker she could imagine, inspired by Choo’s Cinderella shoe.

“We took the trend of these exaggerated, big-volume silhouettes, and then imagined what it would be like to actually step into a diamond. It’s the jewel, it’s that multifaceted, precious element that Jimmy Choo owns. It’s the light. What people want is this over fantasized version of what Jimmy Choo can take it to,” she said.

The lacquered lightweight TPW sole is chunky, transparent and faceted like a gemstone while the vamp glitters with 5,000 Swarovski crystals and silvery laces. Choi calls it “Cinderella meets the sneaker,” referring to the brand’s Swarovski-encrusted Cinderella pumps.

The Diamond, at 2,795 pounds (other versions start at 600 pounds) is for men and women and has been generating waiting lists since the launch. The style, Choi said, will evolve into boots for fall 2020.

Denis said sneakers have changed the entire dynamic of the shoe market, and Choo has tried to move with the times. “Had we stuck with the pointy toe, we would have been in trouble,” he said, adding that the pivot has helped the brand pick up younger customers, particularly in Asia.

In the U.S., he added, women who traditionally wore sneakers to work and swapped them with heels at the office don’t do that anymore. “In the new world, you keep your sneakers on all day.” That’s another reason women don’t need such big bags anymore, he added, because they’re no longer lugging a second pair of shoes around.

As they endeavor to keep up with customers’ needs, Denis and Choi have also been looking at the soul, values and purpose of the label. Their thinking has resulted in runway, product and behind-the-scenes collaborations with hot brands such as Off-White or emerging names, such as London designer Ashley Williams.

They’ve also come up with a content franchise called “In My Choos,” a series of interviews that launched with Sienna Miller. Going forward, Choo plans to ask celebrities, Choo customers and people “who stand for something,” to talk about what they’ve accomplished, and what they can still achieve and how they can inspire others, said Denis.

“In My Choos” is meant to help with social media messaging and community building, while the brand is also planning IRL events meant to travel beyond branding and into lifestyle. “The relationship between a person and their Choos is very inspiring and we want to push that even more so,” said Choi, adding that the brand wants to take on the role of “influencer,” and stand out from its peers.

Next up for Choo is a renewed focus on men’s, which has already been gaining traction. Some 40 percent of fragrance sales are in the men’s category, Denis said, while Choo’s enthusiastic shift into sneakers has also been a boon with men.