Building new headquarters on the Place des Vosges, the brand is expanding at home and in Asia, aiming to double sales in the next two years.

PARIS — Lemaire has embarked on an ambitious expansion drive, bulking up its e-commerce operations, building new headquarters on the Place des Vosges in the heart of Paris, and drawing up plans to open two stores in Asia. The brand aims to double sales over the next two years.

“We’ve always been very pragmatic. We never wanted to go too fast — we don’t do megalomaniac projects; we’ve never proceeded that way — but we have the feeling we need to develop retail, notably e-commerce,” said Christophe Lemaire, codesigner and founder of the brand. He spoke to WWD at the Duperré School of Applied Arts, along with codesigner Sarah-Linh Tran and the label’s managing director, Catherine Jacquet.

Lemaire founded the label in 1991. Following ten years leading artistic direction at Lacoste, the designer relaunched the brand in 2007, and was joined by Tran two years later. Lemaire was also creative director of women’s collections at Hermès from 2010 to 2014.

In 2018, Fast Retailing Co. Ltd. took a minority stake in Lemaire, and Jacquet was recruited in September the following year. The executive was previously managing director of the Chanel group’s Maison Michel.

Lemaire described Fast Retailing, the parent company of Uniqlo, as a supportive shareholder that does not intervene much in its strategy. He is also creative director of Uniqlo’s research and design center in Paris, and of the Uniqlo U collection; Tran serves as a consultant for the women’s collection of Uniqlo U.

“We had a modest e-shop that was operated in an artisanal manner, in euros, with limited brand content — more of an e-commerce site than a corporate site,” said Jacquet. This new site will be launched at the end of the month.

“It’s going to be expanded because we have a lot to say — we’ve equipped ourselves to produce more documentaries of our products and the way in which they’re developed — creating more interaction between the e-shop and the more editorial side of the site,” explained Tran.

The designer detailed plans to show how clothing and accessories are made, emphasizing the weave of the fabrics and the production of molded leather accessories, for example, as well as the collaboration with the estate of Mexican artist Martín Ramírez.

“We will show the process — a lot is handmade in Spain, Portugal and Italy,” noted Jacquet, referring to accessories.

The e-shop will get a full makeover, with enhanced images, added services like click and collect, and the option of setting up appointments with stylists.

“We’ll be more demanding with the images on the e-shop, drawing on what we build for the fashion shows when it comes to looks — reproducing this and extending it to the e-shop,” added Tran. 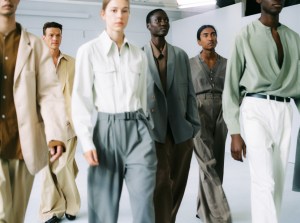 At the same time, the brand is working on broadening its physical world. The label has one store — its historic boutique, on Rue de Poitou, in Paris — but plans to open several new units in the coming three years.

First up, an accessories store on the Place des Vosges, downstairs from the new headquarters, at the end of the year; a store in Tokyo next year, and, in 2023, in Seoul. Plans for an accessories store highlight the label’s emphasis on the category, which generates 28 percent of sales and constitutes an important area for future development. The label is known for its soft Croissant bag, as well as its harder satchel-like accessories that come in various shapes and sizes — some just big enough to hold a mobile phone.

“The idea is to develop flagships in big fashion capitals around the world,” said Jacquet.

The label generates 85 percent of its sales from abroad, including around 35 percent in Asia and 35 percent in North America. Sales in the year at the end of March were around 19 million euros.

“[The flagships] will be fairly focused and exclusive, the idea is to have a place to express the universe of the brand,” she continued.

“It’s important we express the brand, both with the men’s and women’s collections — ready-to-wear and accessories — but also its whole environment. There’s a lifestyle and brand universe that’s fairly rich, it’s important that we are able to express it through our stores,” said the executive.

The brand has been working on building expanded headquarters for some time, but the crisis nearly threw a wrench into plans.

“We had been looking for a year and a half, and when the crisis hit we questioned the decision. We decided to sign for it in the end because we were convinced it was necessary to realize our potential,” said Lemaire. The new headquarters will more than double its current space, stretching over nearly 13,000 square feet, and will include a showroom.

While there is incertitude in the fashion industry, the brand has certain strengths, particularly when it comes to new consumption habits, he added, referring to the label’s focus on quality, European production and timeless designs.

Lemaire will close Paris’ virtual men’s fashion week Monday with a video presentation of a coed lineup — it makes more sense to show the house’s coed collections during the men’s calendar, said the designer, noting the house is simply shifting the timing of the shows, not their format.

“For us, it makes sense to show men’s and women’s together, as you’ll see, with a styling that goes a bit further than usual,” he said, adding that it is not a change in direction, but rather clarifies a narrative that the brand had been working on.

The company seeks to bring a certain continuity to collections, rather than marking each season as a departure from the previous one, noted Tran.

“We want to allow people to enrich their wardrobe rather than setting it aside to create a new one,” she explained. Working neutral color palettes allows clients to build nearly monochrome looks over different seasons, while different pieces in the same material, from one season to the next, will also be easily combined, added Tran.