Located on a quaint Parisian square near the Palais-Royal garden, the first Café Kitsuné restaurant signals the ready-to-wear label's pivot toward the hospitality business.

PARIS — In its five years of existence, the Café Kitsuné Palais-Royal, a coffee shop opened by Franco-Japanese fashion brand Maison Kitsuné in the Palais-Royal garden, has pretty much become a Parisian monument.

“Tourists stop by to take pictures like they would for the Mona Lisa,” joked the brand’s cofounder Gildas Loaëc, speaking at the headquarters a couple of streets away.

Kidding aside, with more than 77,000 mentions on Instagram, including countless pictures of fox-shaped biscuits — “kitsune” is the Japanese word for fox — and perfect matcha lattes, branching into the café business was an undeniable image boost for the brand.

Maison Kitsuné, which began as a music label in 2002 before adding a ready-to-wear line in 2005, now counts five coffee shops around the world, including spots in Seoul, operated in partnership with Samsung, and Tokyo, with future Café Kitsuné openings scheduled for London, New York, Shanghai and Jakarta before the end of the year.

But the brand chose Paris, where it all started, for the first chapter of its latest adventure: The opening of the very first Café Kitsuné restaurant, taking over a 1,720-square-foot former travel agency on the Place André Malraux, a quaint Parisian square between the Opera and the Palais-Royal garden. 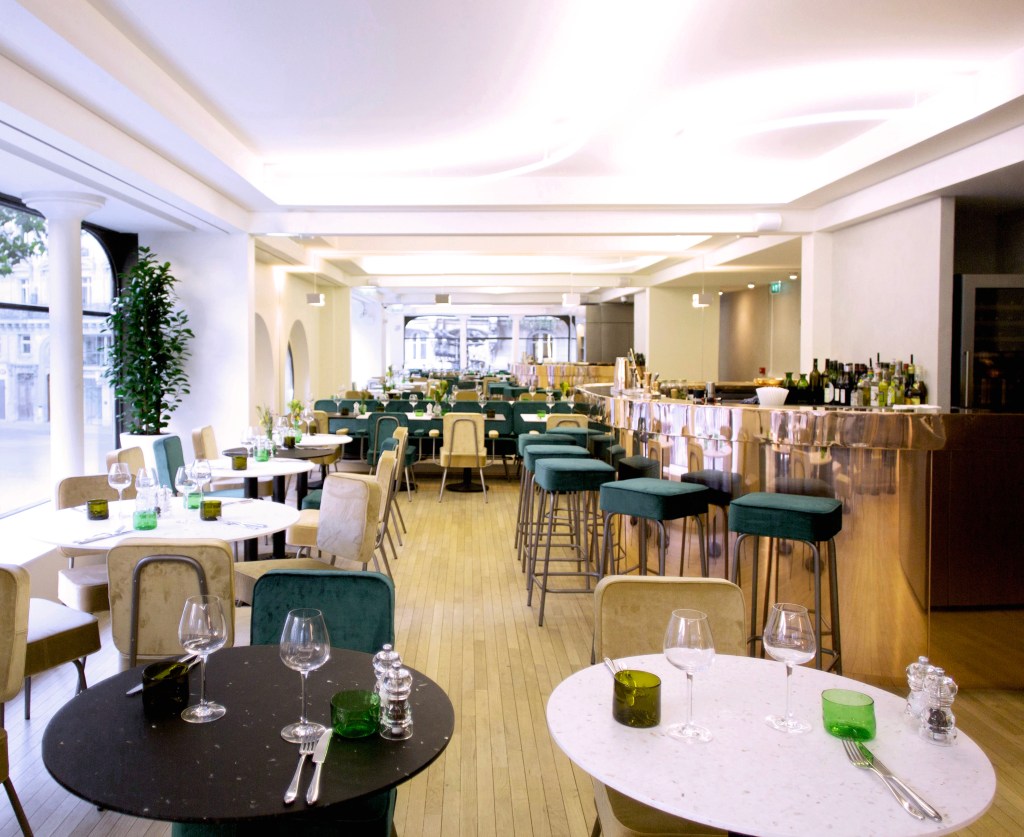 Opening Sept. 23, the restaurant — which also counts a coffee shop on its ground floor and a bar on the upper level and is surrounded by a huge bay window giving a stunning view of the Parisian square — will serve dishes blending French and Japanese influences, mirroring the brand’s dual identity: It was founded by Loaëc, who is French, and Masaya Kuroki, who originates from and is based in Japan.

As a result, the menu features twisted French brasserie classics, like a Croque monsieur with tuna instead of the usual ham and cheese combo, and Japanese delicacies, such as azuki toast, dorayaki pancakes and mochi. The brand tapped Yuji Tani, a Tokyo-based Japanese chef known for his unique take on French cuisine, to come up with the recipes, which are executed in Paris by Chihiro Yamazaki, former chef at the Opera Garnier restaurant.

The place will be open every day from 8:30 p.m. to midnight, and will serve everything from drip coffee to bespoke cocktails created by a certified mixologist. Clients can even buy their own Café Kitsuné tableware, specially made by a porcelain manufacturer in Limoges and exclusively on sale at the restaurant. Everything is very photogenic. 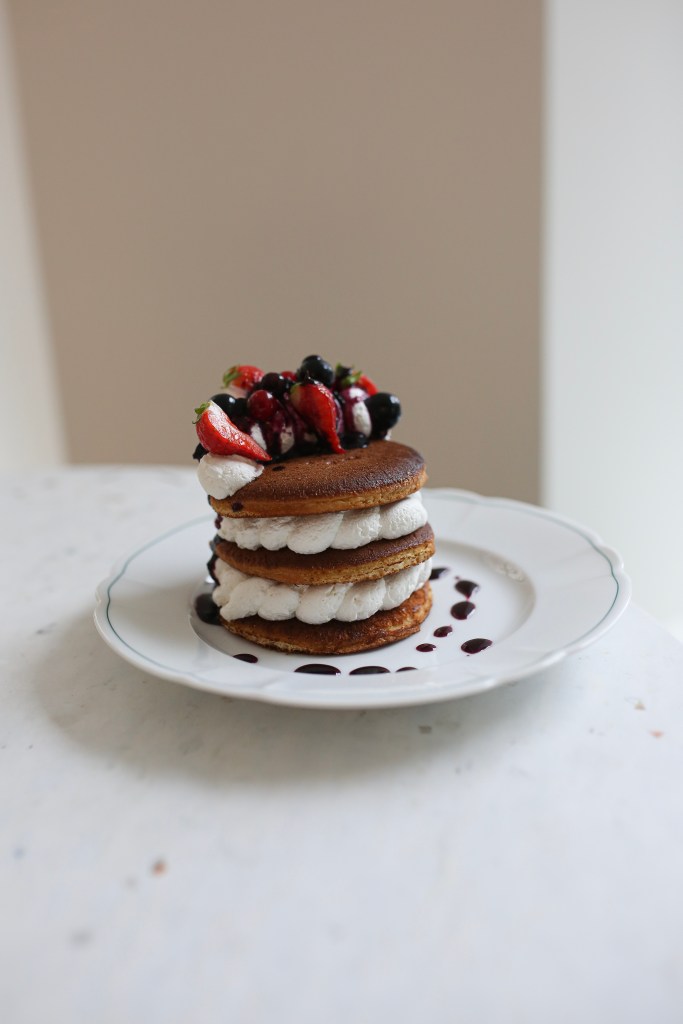 Dorayaki pancakes at the Café Kitsuné Louvre.  The Social Food

The opening of the first Café Kitsuné restaurant, a mere few months after the inauguration of the brand’s second Café Kitsuné in Paris located near the Tuileries garden, marks a clear push in the sector of hospitality for the brand, which has always considered itself to be a lifestyle label and operated organically.

“For the last five years I’ve been reading in the press that fashion brands are turning into lifestyle brands, but the truth is, because we started out as a music label and then branched out into fashion, that has always been our way of seeing things,” said Loaëc, who cites Japanese brand BAPE, which in addition to a streetwear line had coffee shops and even a barber, as one of the brand’s models.

Paris is currently swarming with fashion-cum-foodie projects, from the Saint Laurent café on the Rue Saint-Honoré to Simon Porte Jacquemus’ restaurants at the Galeries Lafayette Champs Elysées, Citron and the soon to be opened Oursin, both operated in collaboration with Caviar Kaspia. Recently, influencer and Rouje founder Jeanne Damas announced that her first boutique will also feature a restaurant.

“It’s just a question of living with the times,” shrugged Loaëc, who also admitted that the changing music business led him to focus a bit less on the label side of Kitsuné, even though it is still active. “It’s also linked to wanting to tell stories on Instagram, of course. You need to constantly stay active and feed new images to your community to keep an audience. We’re very lucky, people post a lot about us. I spend a lot of time thanking each of them personally.” 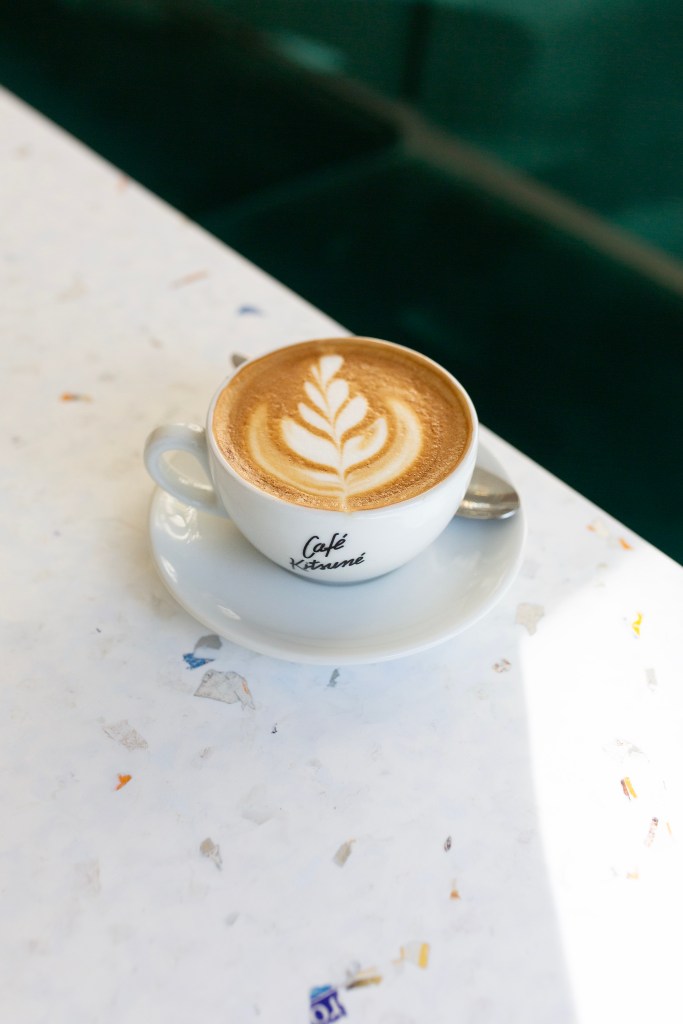 Maison Kitsuné is planning to open its own Café Kitsuné roasteries in Paris and Okayama, Japan.  The Social Food/Courtesy Photo

In 2018 Maison Kitsuné reported an annual revenue of 40 million euros, or 44 million dollars, 90 percent of which was generated by the ready-to-wear line, the remaining 10 percent divided between its music label and the hospitality activities. In December 2018, former Celine designer Yuni Ahn took over creative direction of the Maison Kitsuné fashion label and was tasked with creating a more fashion-forward look for the formerly preppy brand.

The brand’s lifestyle push was made possible thanks to a second investment by Japanese fashion group Stripe International in October 2018, following a first financial boost in 2016.

“We’re still independent of course, but it’s been a really great strategic partnership,” said Loaëc. “The lifestyle expansion is a key aim for this second investment. It allowed us to take up leases, hire bigger teams, and push things further: Why not distribute cans of Café Kitsuné cold brew or fox-shaped biscuits on the market? There are so many things to develop that we are currently investing in.”

One of these is opening the first Café Kitsuné coffee roasteries — there are two on the cards, one in Paris and the other in Tokyo — as well as the very first Maison Kitsuné hotel in Bali, set for 2021. Operating with local partner Buva Group, the hotel will feature a restaurant, café and possibly a beach club.

“We’re always interested in how our brand can adapt to different environments,” said Loaëc, who brushes away the term “chain.” “Every one of our shops or cafés has a unique link to its location: The first Café Kitsuné in Paris is housed in a former showroom for Jules Tournier, a tweed supplier for Chanel. When we saw how well our two first Café Kitsuné were doing, we sat down and had a brainstorm to define the main lines of the business, what makes a Café Kitsuné today. Having established guidelines helps us open places ourselves, but also allows us to work with different partners on a range of territories.”

In Paris, where seven out of its 21 stores and three of its cafés are located, the brand’s next goal is to woo the local clientele.

“Currently the clients of the Café Kitsuné Palais-Royal are 80 percent tourists, 20 percent locals,” said Johanna Lellouche, director of operations for Café Kitsuné, the hospitality entity the group created in 2013. “Most of them are from Korea, Japan and China, and there are more and more visitors from the Middle East. We’re in a very tourist-centric zone as we are near the Louvre and the Tuileries garden, but we’d love to bring more locals in and aim for a 60-40 distribution.”

For Loaëc, Maison Kitsuné’s hybrid character, which might have been confusing for the market at first, is actually one of its biggest strengths.

“When we launched the ready-to-wear line, we were seen as a music label dabbling in fashion. Now, we’re a fashion brand that also does coffee,” he said.

“People never really took us for a real music label or a real fashion brand, they see a trendy café and think we’re only doing it for the marketing. It’s difficult to convey pertinence and authenticity. All we’ve ever been interested in is doing things that we’re excited about, and do them well.”