Retailers continue to roll out new in-store technologies to meet shifting consumer expectations, as many shoppers now welcome technology that facilitates an intuitive product-finding experience. Shoppers want to make the most of their store visits, and the vast majority of them want to be left alone by store associates while they shop, unless they need help with something specific. But as more shoppers turn to in-store tech, rather than store associates unless wanted for customer service, retailers must assess which tech offerings are worth investing in right now and which ones customers consider unimportant.

To gain insight on which in-store features shoppers value most, we recently surveyed nearly 3,000 North American consumers across Generations Z, X, Millennials and Baby Boomers. The survey revealed that an overwhelming 95 percent of respondents overall prefer to be left alone in stores unless they specifically need an associate’s help, and that shoppers generally expect technology to be central to the in-store experience, facilitating everything from price checks to wardrobe recommendations to payments. 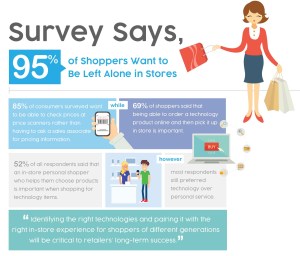 While in-store environment ranked as the most important store feature in our survey, retailers must not only create a pleasant space in which to shop, but also provide the right kinds of in-store technologies for shoppers, which can be challenging given the constant flow of tech innovations coming to market. With no crystal ball, many retailers and brands wading through the deluge of new retail technologies are taking a broad-stroke, “pay and pray” approach. But retailers that do not fully understand which offerings are nice-to-haves and which are need-to-haves risk exposing themselves to unnecessary added costs.

The results of our study offer a valuable peek into the minds of today’s tech-savvy shoppers and can provide some much-needed guidance for retailers and brands trying to decide which technology investments are worth it in consumers’ eyes.

Free In-Store Wi-Fi Is a Must

According to the survey, many shoppers are moving away from the hands-on, personalized service traditionally provided by store associates and instead turning to social media to share photos of items and get feedback on them from family and friends before they buy. Nearly 70 percent of Generation Z and 63 percent of Millennial respondents said that they want to be able to share pictures and gather opinions from their social media networks while shopping, particularly before they buy apparel. Free in-store Wi-Fi, which facilitates this kind of sharing, was ranked as an important store feature by 30 percent of respondents overall, and the rate was higher among younger generations, suggesting that in-store Wi-Fi is an investment that will continue to pay dividends in coming years.

Shoppers Are Glued to Their Smartphones

About 29 percent of survey respondents overall ranked in-store apps that provide personal recommendations as an important store feature, while only 17 percent ranked sales associates that help them choose products as important. A higher proportion, nearly 34 percent, ranked receiving promotional and sales information directly via smartphone upon entering a store as important. Retailers that invest in mobile offerings that provide product and sales information and recommendations are likely to see benefits. 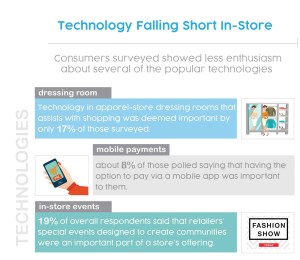 Let Them Scan It Themselves

Shoppers prefer to check prices by scanning merchandise on their own rather than having to ask a store associate, and they like to be able to pay from anywhere in the store, indicating that digital scanning technologies will play a growing role in retail. Approximately 85 percent of consumers surveyed said that they want to be able to check prices at price scanners throughout a store and nearly 30 percent said that being able to pay from anywhere in the store was an important store feature.

Shoppers, particularly younger ones, expect a seamless online and in-store experience, but just offering buy online, pick up in-store service isn’t enough. Many shoppers want to be able to reserve items online, but then test or feel them in-store before they buy: some 42 percent of Millennials surveyed and 38 percent of Generation Zers said that they want to be able to reserve apparel online and try it on in-store before purchasing. Meanwhile, some 69 percent of respondents in all age groups said that being able to order a technology product online and then pick it up in-store is important to them (likely because they want to try it before they buy it), and a similar percentage of all respondents, 65 percent, said that this option is important to them when they are shopping for apparel.

The survey also revealed that consumers put much less importance on some of the other technology innovations and in-store experiences that many retailers are investing in right now.

Mobile Payments Are Not Yet Critical

Although mobile payments are slowly gaining traction in the U.S., shoppers consider them one of the least important in-store tech offerings. Only about 8 percent of those polled said that having the option to pay via a mobile phone was important to them. However, as mobile payment software is making it easier for parents to transfer funds directly to their children via apps, this technology could become more important in retail in the years to come.

Dressing-room technology that assists with shopping was deemed important by only 17 percent of those surveyed. And only 6 percent of respondents ranked customized lighting in dressing rooms as important when shopping for apparel and shoes.

In-Store Events Are Not a Big Draw

Many consumers already prefer to have their customer service needs met by in-store technology rather than by sales associates, and retailers must adapt to their expectations when creating and managing their store environments. Investing in the right technologies and pairing them with the right in-store experience for shoppers of different generations will be critical to retailers’ long-term success. Those that can avoid chasing the “next big thing” in retail technology in favor of curating and customizing their store experience and services to suit shoppers’ needs will see the greatest benefits and return on investment.