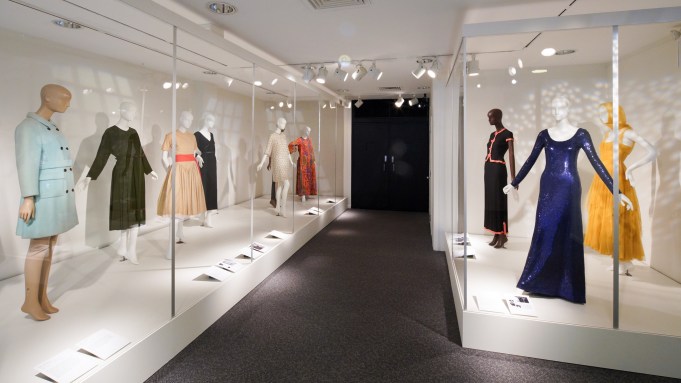 Pioneering fashion publicist Eleanor Lambert was many things to many people and the Museum at Fashion Institute of Technology has put her career in the spotlight with a new exhibition.

Curated by the students of FIT’s Fashion and Textile Studies: History, Theory, Museum Practice Master of Arts program, “Eleanor Lambert: Empress of Seventh Avenue” is the first exhibition dedicated to Lambert. It examines what was an unrivaled 75-year career. Along the way she put in motion the International Best-Dressed List in 1940, started the Coty American Fashion Critics’ Awards two years later, created the New York Dress Institute’s Couture Group in 1953, and helped establish the Council of Fashion Designers of America in 1962.  After Faith Cooper discovered John Tiffany’s book “Eleanor Lambert: Still Here” last summer and shared it with Carol McLennan, the idea for the show was crystallized.

Visitors will find a photo of Lambert paired with one of her Bill Blass coats that was donated to the MFIT near the entrance. Five sections follow – “Organizations,” “Fashion Meets Politics,” “Creative Society,” “Black Fashion Support,” and “Eleanor Lambert’s Vision of Seventh Avenue.” Among the items is a handwritten letter from the then incoming first lady Jacqueline Kennedy, who turned to Lambert for help after being criticized by WWD for buying French fashions. In addition to her response letter, there is the copy of the WWD article and a letter from Lambert commending Kennedy for choosing Oleg Cassini as her “secretary of style” (following Lambert’s recommendation.)

In addition to numerous designers like Blass, Cassini, Hattie Carnegie, Oscar de la Renta and others, Lambert plugged museums and artists like Salvador Dalí and sometimes connected the worlds of art and fashion. Lambert helped Dalí secure a campaign for the International Silk Congress. The Surrealist’s design was splashed on the cover of American Fabrics in 1950, which subsequently helped his foray into fashion.

McLennan said she was impressed by how Lambert and the New York fashion industry picked up the mantle, when Paris was occupied by Nazi soldiers during World War Two. “Not only did they not have any Paris fashion design, they were restricted by the [War Production Board’s] limitation order 85 so they had less fabric to work with. Despite this, she created the Coty Awards with Coty cosmetics company to highlight younger designers, and to put New York City on the map with equal standing with Paris. Then she insisted that all these designers who had always been in the backrooms of department stores designing copies of Parisian couture, she brought them into the forefront, branding their names and using them to sell products — Claire McCardell for Townley [Frocks], Traina-Norell with Norman Norell. Designer names were now on the labels of department stores. She really helped create American fashion as we know it.”

Cooper was more impressed by how Lambert was the first to hire black models such as Jacqueline Clay for the American National Exhibition in Moscow in 1959. The late Shirley Goodman, a longtime executive at FIT, had been in charge of recruiting some of the models and called in Clay, who was then a fashion design student at the school, to see what her plans were for the summer and to see if she would like to go to Moscow to represent America, McLennan said. “Lambert made sure that they showed the diversity of America, including racial diversity.”

Two years later she encouraged her client Pauline Trigère to hire the first black Seventh Avenue model Beverly Valdes in 1961. Visitors will see one of the first press images that Lambert used for that occasion, as well as references to the black models who participated in the “Battle of Versailles.” Cooper said the team learned through their research that Ebony magazine was not known as a fashion magazine until Lambert phoned and convinced her clients to lend garments to Ebony to photograph.

McLennan said, “Not only are all of the garments we’ve chosen gorgeous on their own, but each one tells a story about Eleanor Lambert and how she helped each designer’s career and touched their lives. It shows the evolution of American fashion,” citing a Calvin Klein coat from his first collection in 1968, a seldom-seen Stephen Burrows coat, a sequined blue Halston dress from his 1972 collection, which Andy Warhol used to produce a fashion show called “An On Stage happening” at the Coty Awards that same year.

Royalists will be drawn to a Mainbocher dress — the design for which was made for the Duchess of Windsor Wallis Simpson, who was a good friend of Lambert’s. “Eleanor was also the one who convinced Wallis to donate her wedding dress to the Met [the Metropolitan Museum of Art’s Costume Institute.]

The museum later this month will host a screening of the documentary  “Eleanor — Godmother of American Fashion” and a talk with James LaForce and documentarian and Lambert’s grandson Moses Berkson, “It’s an immense list of all her initiatives. She wore so many different hats,” Cooper said.

The exhibition runs through March.