Destination cruise shows are multiplying, with brands rewriting the show calendar and controlling the messaging like never before — and they're only going to get bigger.

LONDON — It has barely been two months since Paris Fashion Week and now the itinerant show season is taxiing for takeoff: There are 17 runway events planned in 11 cities for cruise and men’s wear over the next two months.

The adventure — a carbon-heavy trip around the world for a lucky few — starts today with Dior’s resort show in Marrakech, the first time the French house is staging a major event in Morocco.

The shows will wrap on July 4 in Rome with Fendi’s tribute to Karl Lagerfeld’s 54-year tenure at the house. Between those dates, a handful of fashion editors, influencers, stylists and celebrities will have flown to New York (in some cases, twice), Australia (for Jonathan Simkhai’s show), Tokyo, Shanghai, Rome, Berlin, Florence, Monte Carlo and Paris.

Those looking to cover both the Prada men’s spring 2020 show in Shanghai and the Saint Laurent men’s event in Los Angeles are out of luck, though, as they each take place on June 6. That said, with some creative jet scheduling — private or otherwise — anything is possible.

If a single individual were to attempt the entire cruise schedule and the destination men’s wear shows, that person would need stamina and wheelbarrows of cash. Starting in London, the trip would add up to 167 hours and 50 minutes of flight time, cover about 80,172 miles and cost 40,842 pounds for business-class flights. 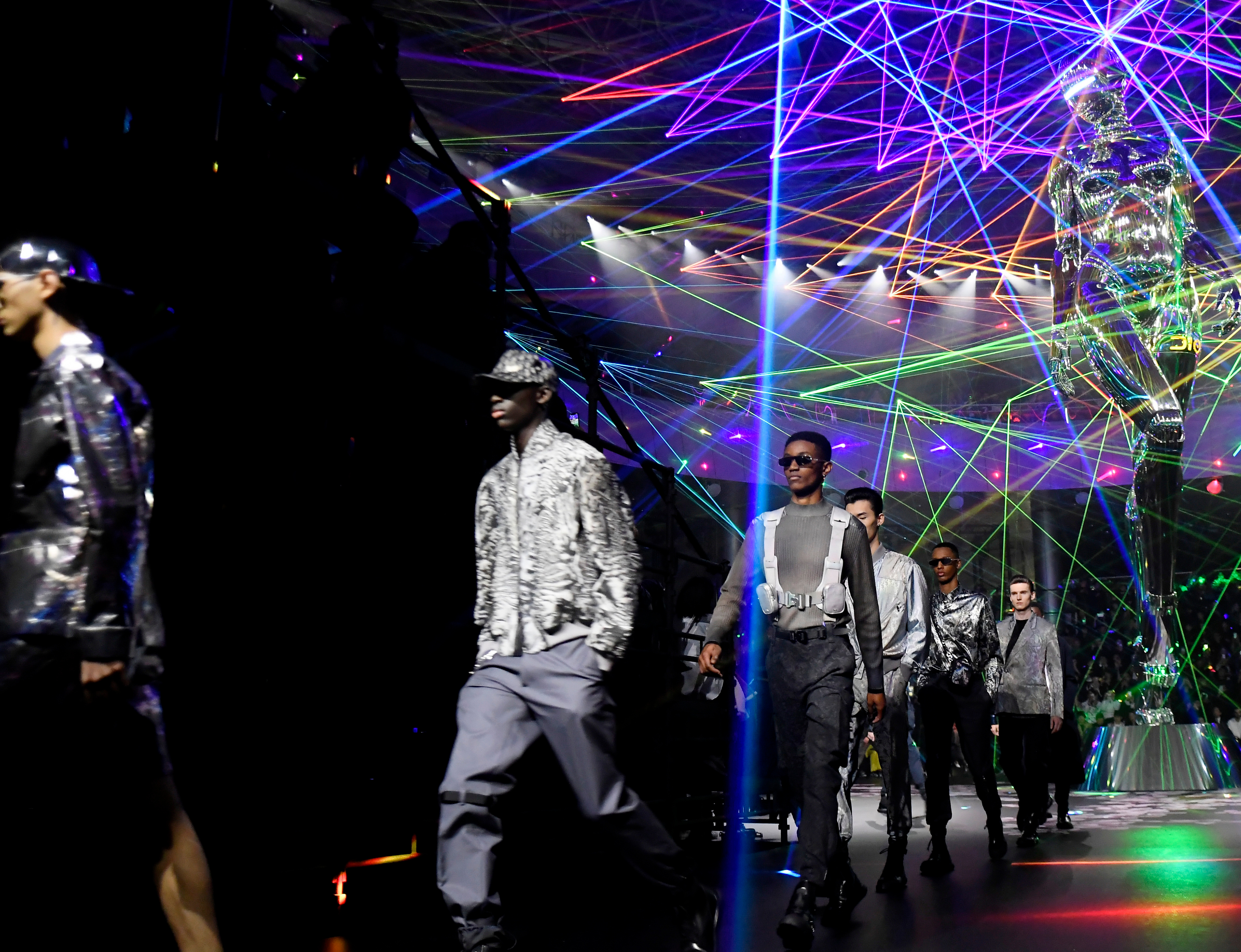 The trip would produce 45.3 metric tons of carbon dioxide, according to the calculator on MyClimate.org. According to that site, the maximum amount of CO2 a person should produce per year in order to halt climate change is 0.6 metric tons. The average European Union citizen produces 8.4 metric tons a year.

And that’s just for the flights, not taking account of the five-star hotels in each location, the private cars or Ubers from the airports to the hotel to the location and back, and the fine dining that will be had during the events. But who counts the costs apart from the brands, since they are the ones picking up the tab for the attendees (except for a very, very few cases, including WWD)?

While the costs may be staggering, these extravaganzas are only poised to get bigger in the coming years. Why? Because they make absolute sense for the brands. While the show lineup may evoke a mixture of excitement, pleasure, anxiety and (perhaps in a few cases) guilt — about carbon emissions, luxury excess, or taking  leave from one’s friends and family — these shows are a vehicle for the brands to promote themselves in spectacular fashion. And their main fuel is pre-collections, which can account for up to 80 percent of annual revenues, as these stay on the shop floor for longer than the fall-winter or spring-summer ones that are unveiled in February and September.

These shows also allow the brands to leverage all the social media — and word-of-mouth chatter — from the editors, publishers, influencers and celebrities they trust the most.

Why would a brand advertise in a big fashion magazine, and haggle over rate cards, when it can create a dream of its own and sell that dream at a time when young, rich consumers — in China especially — are focused on social media and retail experiences?

According to McKinsey’s latest report on the future of luxury consumption in China, consumers born in the Eighties and Nineties are picking up information about the latest luxury products online, via social media or in person, forging tight relationships with savvy salespeople in cities or at travel retail hubs. Indeed, McKinsey pointed out that “traditional ads fail to command the avid attention of consumers.”

Against this backdrop, itinerant shows hit the sweet spot. “The brands have a captive audience for three days, dialoguing about them, just about them. It is an incredibly valuable commodity, and there aren’t that many of us who get invited,” said Sophia Neophitou, the stylist and editor of 10 Magazine. “It’s a more curated group of people, moving from show to show, immersed in the experiences they want to give you. For the brands, the result is invaluable communication of the experience.”

So impressed with the look, feel, execution — and strategy — behind these shows, Neophitou last year launched a spinoff title called 10+, which she describes as a “book-a-zine,” that’s meant to amplify great photography and the grandeur of the pre-collection extravaganzas. She made the timing work, too: 10+, with its pull-out posters and lavish runway coverage, lands on newsstands just as the pre-collections are hitting the shop floor.

“The real question for me is why would a brand spend millions on a traditional, seasonal runway show when that collection is only going to generate 20 percent of revenue? Why wouldn’t you spend that money on a really amazing experience for the few people, whom you know are going to give you what you need? And that is, ultimately, noise about the brand, the clothes and the experience,” added Neophitou, who said she plans to divvy up all the show coverage and trips with her small team.

Bryanboy said he plans to attend Dior, Prada, Max Mara and Gucci, as he has a working relationship with all of them, and they are also covering the cost of his travel. He echoed Neophitou, saying these destination events make commercial sense.

“Cruise collections have the longest shelf life out of all the collections, and it’s perfectly reasonable for a brand to invest in them. These are mega-brands taking part in image building to sell their wares,” he said.

Luca Solca, senior research analyst, luxury goods, at Bernstein, sees the shows as part of a broader marketing continuum. “This is the nth attempt to attract attention and ‘surprise’ consumers in a similar vein to pop-up stores, new communication channels, new products, capsule collections. The goal seems always to be the same, breaking the routine in the battle for traffic and viral marketing,” he said.

The designers tend to see things slightly differently, and often treat these foreign shows as an opportunity to conjure a mood and to lay bare their thinking, background, education and research. What could be more fitting for classical antiquity geek Alessandro Michele than a Gucci show at the Capitoline Museums, in the shadow of the Roman Forum?

Meanwhile, the brands’ managers are undoubtedly rejoicing at the opportunity to cultivate developing — or flourishing — foreign markets via these spectacular displays.

“These shows are different because they focus on clients more so than the [seasonal] shows in Paris and Milan, which are basically for the press,” said Concetta Lanciaux, luxury goods consultant and former senior adviser to Bernard Arnault at LVMH Moët Hennessy Louis Vuitton. “It is true that they are expensive, but they give long-term results as they serve to create a high-end image for the brands in these countries.”

She added: “The brands select really top socialites, and it is a little like when they were creating their image in their home countries back in the Seventies and Eighties. These shows are much stronger than publicity, as they communicate through people, socialites and influencers who are specific to those countries.” 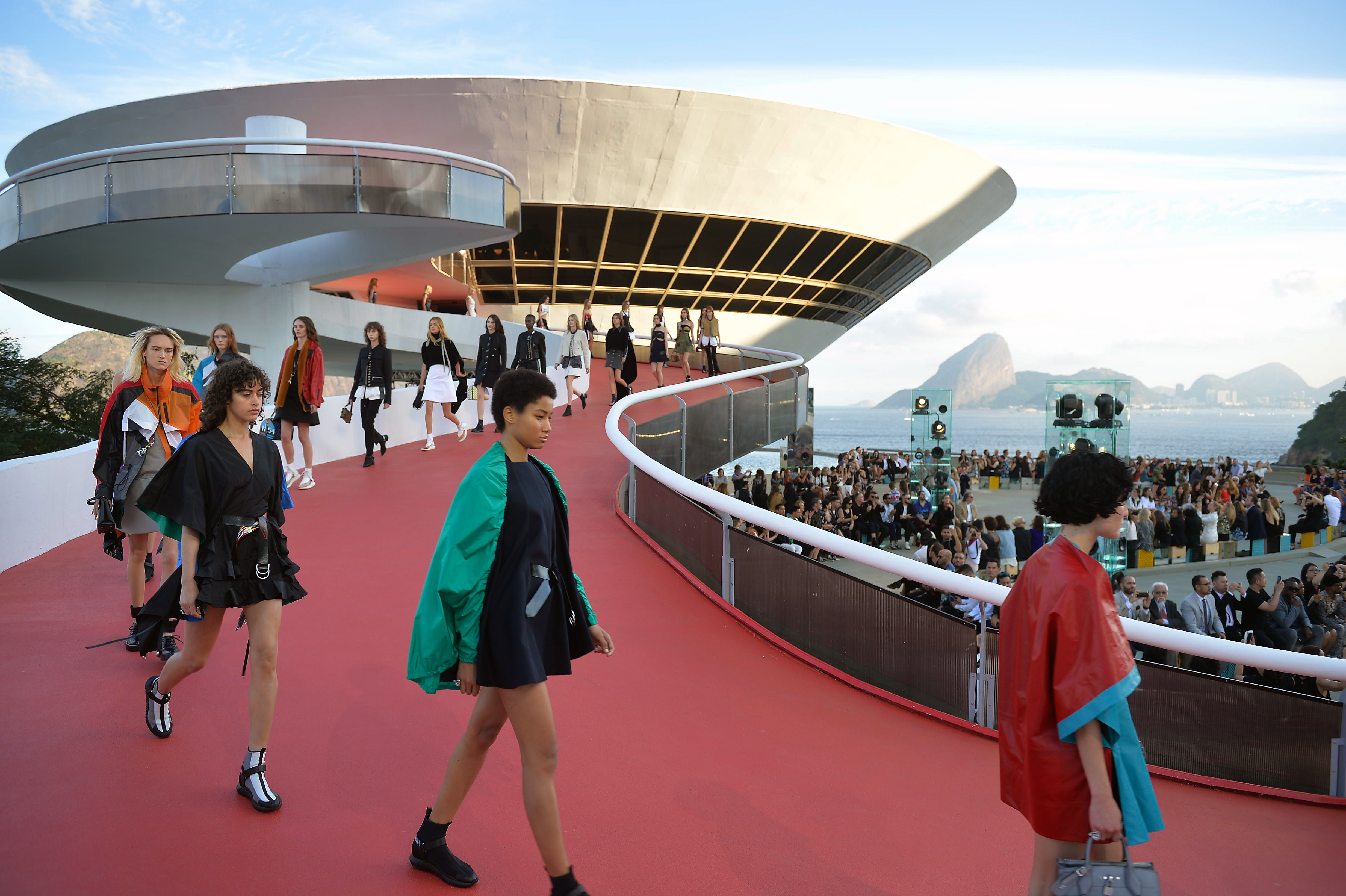 According to Launchmetrics, the marketing platform and data analytics company, the media impact value of these one-off shows is actually less than what a brand can expect to generate during a traditional fashion week, in New York, Paris, London or Milan, but they are a key way to reach new consumers.

“Our data has shown that participating in a major fashion week generates two times the media impact value than a standalone resort show. It is no surprise, as fashion weeks today are no longer an industry-only event, and the key objective is to leverage the greater event buzz to reach the end-consumer,” said a spokesperson for Launchmetrics. “That being said, achieving a high media impact value may not be the main object of resort shows. As these events are highly publicized, fashion followers all over the world are tuning in to see what is happening. Brands often leverage these activities to reach new consumers by showing in foreign cities, or to provide storytelling opportunities that connect with the brand’s heritage, value and vision.”

There are other reasons to show outside the main fashion capitals. Sometimes a brand wants to lavish praise on its hometown, something that Ferragamo plans to do when it stages its men’s show in Florence on June 11 at Pitti Uomo. Or it might wish to pay tribute to a city or locale that means something special.

“Tokyo is an incredible city — so full of energy — a place where the modern exists side by side with the ancient, with no sense of contradiction. It is the perfect backdrop to present my Giorgio Armani men’s and women’s resort 2020 collections,” said the designer, who opened three stores there in Tokyo in the late Eighties, and who has remained close to the market since then, with shows, exhibitions and the opening, in 2007, of the Armani/Ginza Tower. 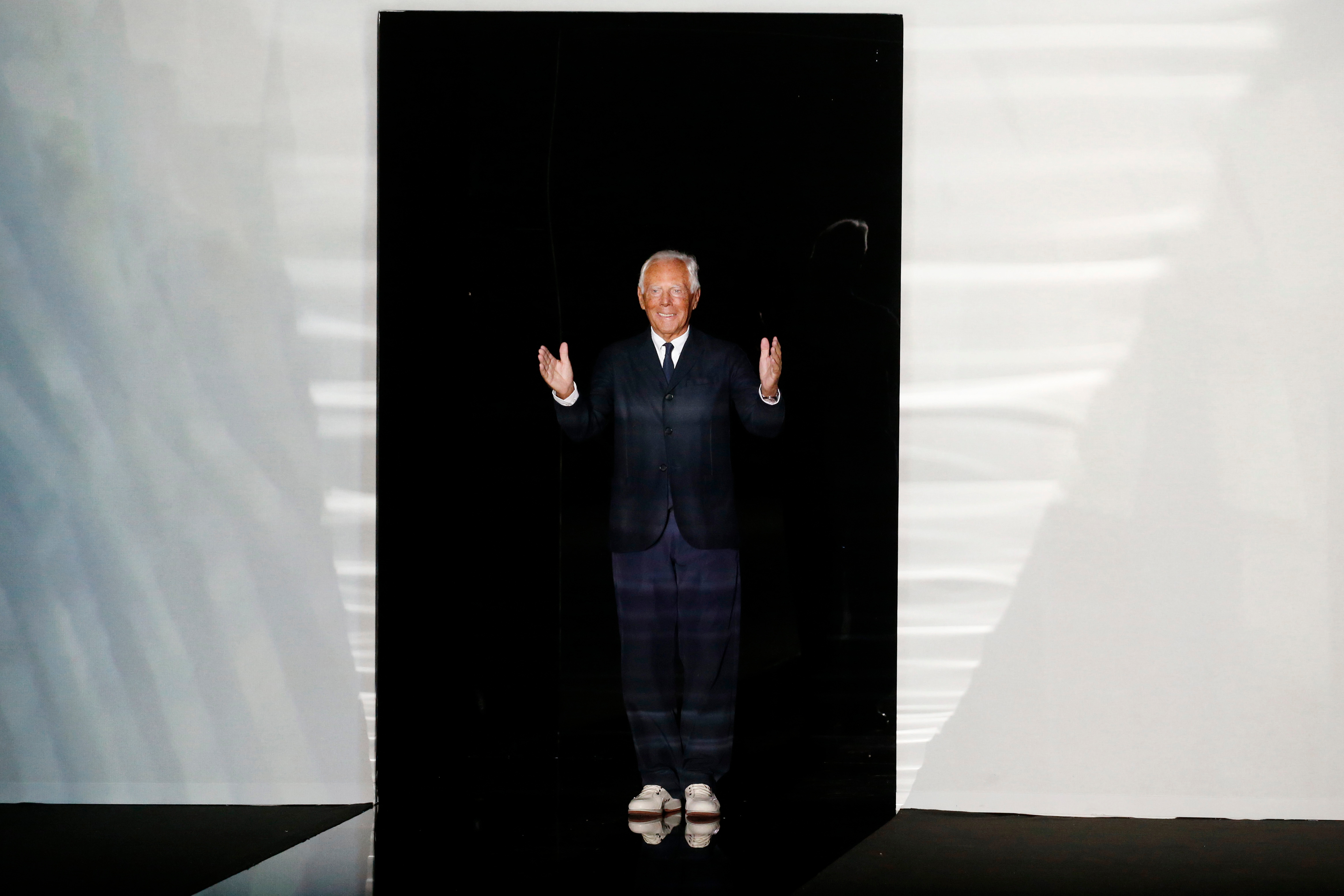 Giorgio Armani on the catwalk.  WWD/REX/Shutterstock

“Since then, it has become one of the most important architectural landmarks in the area, and now it’s reopening with a new look,” Armani added. “I personally worked on the restyling project, in collaboration with my team of architects. I chose to express a desire for renewal, with the utmost respect for the Japanese culture and its values that I have always admired.”

“I feel like the traditional runway calendar may be supplanted in its entirety by the big-brand, traveling cruise show schedule,” said Caroline Issa, chief executive officer and publisher of Tank, the biannual fashion magazine and creative agency. She said she plans to attend Dior, Gucci and possibly Prada in Shanghai.

“The cruise shows are increasingly becoming much higher marketing and content-creation vehicles than the February/September shows can be, with a small, captive audience and usually more VIP customers who relish the luxury experience, and who create a plethora of user-generated content around the brand over a couple of days.”

Issa admitted that all the travel and time involved can be difficult to juggle with a full work schedule, “but my God, how lucky am I to be able to experience the world of the designers and what they create in that show moment, and in the days surrounding, exploring new cities.” 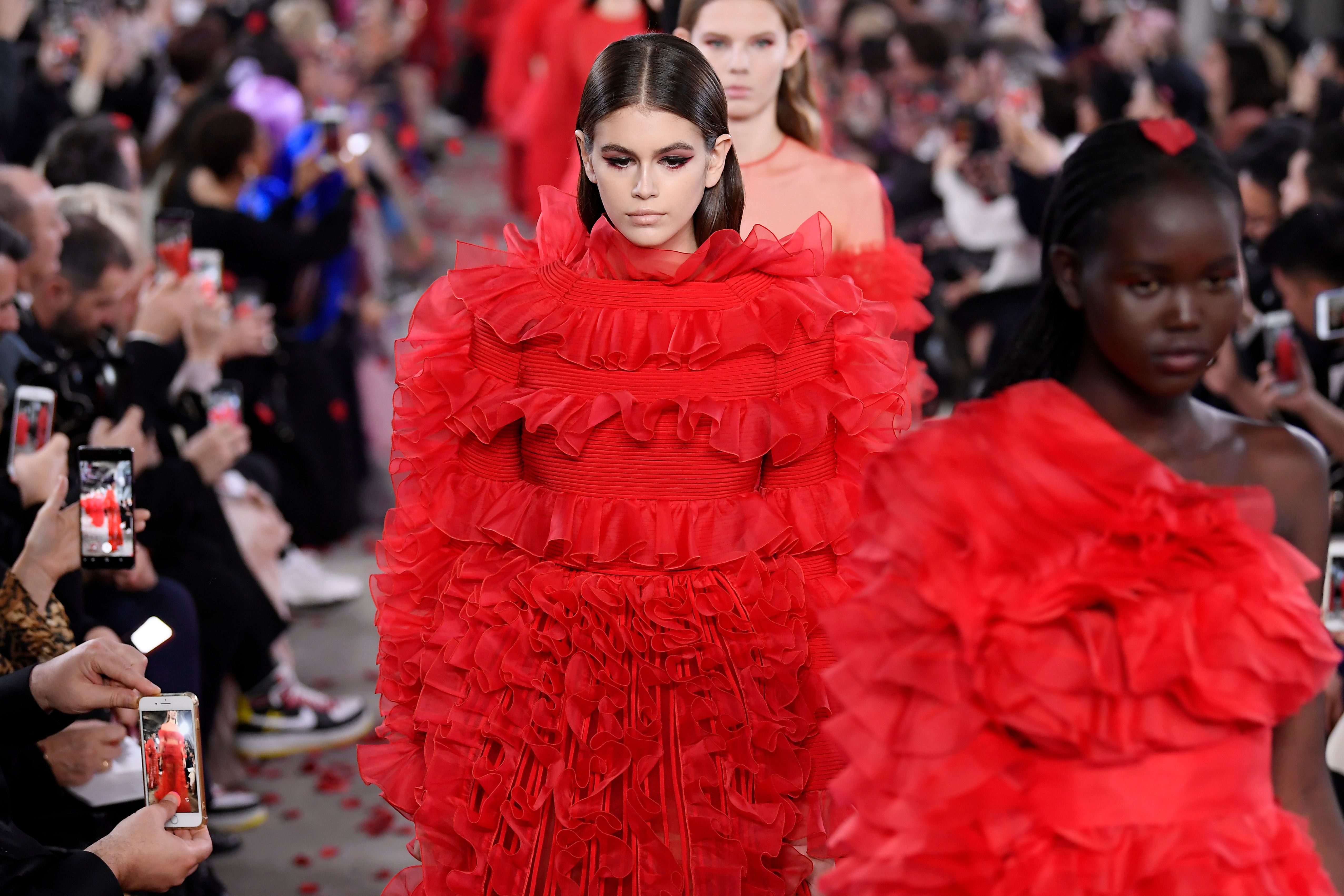