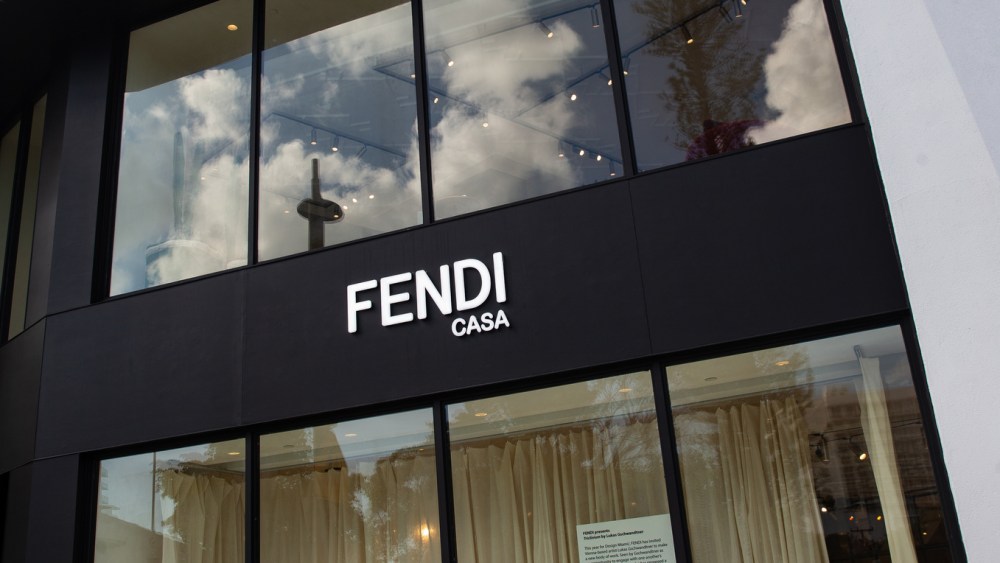 MILAN — Fendi is adding another layer to its longtime connection with Design Miami.

Following the unveiling of its first Fendi Casa store in Milan last April, in central Piazza della Scala, a new flagship opens on Wednesday in Miami’s Design District, coinciding with the start of the international fair.

Fendi has for more than a decade presented a series of special projects at Design Miami together with established and emerging designers including Chiara Andreatti, Cristina Celestino, Dimorestudio, Formafantasma and Peter Mabeo, to name a few. Some of these products are now being reissued and are part of the new Fendi Casa collection.

The boutique is another step in the joint venture with Design Holding, inked last year, and called Fashion Furniture Design (FF Design).

Fendi Casa is also planting a flag in Asia, as a boutique will be inaugurated in Shanghai in the first half of next year. “Step by step, meticulously planned, the project is expanding,” said Fendi chairman and chief executive officer Serge Brunschwig. “Miami continues to have an extraordinary residential development and it’s very important to be present in the city.”

He touted the performance of the Fendi Casa store in Milan, which bodes well for the Miami development, he surmised. “We are super proud, and these stores telegraph a totally new and rich image for the brand,” Brunschwig said.

The Miami boutique covers 6,372 square feet and is characterized by a minimal façade in black and white, with large windows.

Designed by Fendi’s architecture department, with the goal of linking the luxury brand and the Casa stores globally, the flagship spans two floors and is marked by several of its signature codes: the FF logo is transformed into a sophisticated pattern that embellishes the walls, the ceilings are adorned with relief decorations, and the arch motif is a tribute to the Palazzo della Civiltà Italiana, Fendi’s Roman headquarters.

“It’s a very exciting journey and we’ve made a lot of progress as we roll out our business plan,” said Daniel Lalonde, CEO of Design Holding. “The Milan and Miami stores reflect the new positioning of Fendi Casa and we are seeing a wonderful impact with clients, designers and dealers.”

Lalonde underscored the “consistent alignment” of Fendi Casa with the Rome-based codes, which is a key element of the joint venture, to avoid a disconnect between the home division and the fashion categories. Brunschwig, for example, mentioned the canary yellow armchair in fluffy long-hair shearling by Toan Nguyen, which reflects Fendi’s signature color and fur expertise.

Brunschwig enthused about the materials research done by the architects and the “spectacular marbles,” such as the Arabescato Vagli marble, juxtaposed with concrete in the Miami store. Under the creative direction of Silvia Venturini Fendi, the store includes furniture by Piero Lissoni, such as his Ohe outdoor seating system; Marcel Wanders’ O’Lock mirror, and the Matrice bookcase, in steel and crystal, designed by Dimorestudio.

“This is a mosaic of some of the best designers in the world,” said Lalonde.

A special space of the flagship is the Materioteca, a room in which customers, architects and interior designers can sample, through an immersive experience, the entire range of materials and finishes in the collection, aiming at personalization and tailor-made design.

Lalonde said that Brunschwig and Venturini Fendi are extremely involved in the line. Production has been ramped up in Novedrate, a one-hour’s drive from Milan. “This was set up in record time,” said Lalonde, touting the combination of traditional craftsmanship and modern technology invested in Fendi Casa.

The choices of Milan, Miami and Shanghai reflect the importance of the Italian, U.S. and China regions for Fendi Casa, but the goal is “to continue to build strategic markets and key cities — also in particular where Fendi already has a strong presence,” said Lalonde.

The executive said that an expansive shop-in-shop will open in Los Angeles next year, as well as a monobrand store in Mexico in January. “We are also looking at Canada,” noted Lalonde.

In addition to Greater China, he sees much potential in Southeast Asia.

The next full Fendi Casa collection will be presented at  the international furniture and design trade show Salone del Mobile in April.

Venturini Fendi, the house’s director of accessories and menswear, continues to creatively lead the Casa collection, and with Brunschwig and Lalonde, she has been spearheading a major evolution of the line under the joint venture. As reported, in May 2021, the Rome-based luxury company partnered with Design Holding, jointly controlled by Investindustrial and The Carlyle Group, to create FF Design, to  develop the Fendi Casa business. The home line was previously produced and distributed by licensee Luxury Living, operating through Club House Italia.

Previously, Lalonde led SMCP, the owner of fashion chains including Sandro, Maje and Claudie Pierlot. A longtime executive at LVMH Moët Hennessy Louis Vuitton, he was also president of Ralph Lauren International before joining SMCP in 2014. Brunschwig is also a longtime LVMH executive, joining Fendi in 2018 from Dior Homme, after working for Louis Vuitton and Sephora, as well as Celine, all part of the group.

Venturini Fendi is especially fond of the home line for a number of reasons, including the fact that her mother, Anna, launched the Casa collection in 1987.

Accessories have been further developed, from pillows and blankets to trays and decorative objects, as well as tableware.

Founded in November 2018, Design Holding comprises design, furniture and lighting companies B&B Italia, Flos and Louis Poulsen. In April, Design Holding entered into an agreement to acquire YDesign, one of the leading digital platforms in the U.S. for e-commerce in high-end lighting and furnishing products.

Design Holding in the first nine months of the year reported pro-forma revenues of 637 million euros, up 16.7 percent compared to the same period in 2021. E-commerce was up 43 percent and retail grew 35 percent, impacted by the opening of new stores, such as the Fendi Casa flagship in Milan, and an improved performance in the U.S. and U.K.

The company reported a growing interest in design in America, where sales were up 35.8 percent, and in Asia Pacific, which gained 31.7 percent. All countries in the region reported double-digit growth overall, from Japan, up 29 percent, to Korea, up 22 percent, and China, up 37 percent.