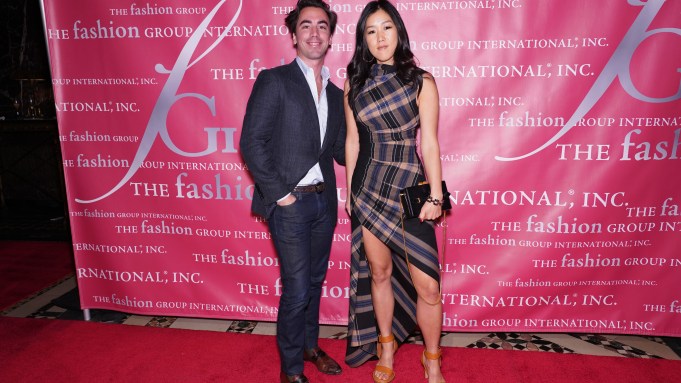 Keynote speakers Laura Kim and Fernando Garcia, the creative team behind Oscar de la Renta and the Monse labels, clued in the crowd on how they balance each other out, and the importance of being upfront about any weaknesses. All in all though, “You have to enjoy what you’re doing,” Garcia said,

Francisco Costa appeared to be doing just that, sharing one of his Costa Brazil fragrances with guests before lunch was served. Like many of the attendees and winners, Costa had other teachable moments in his mind. Next month he will fly to Brazil to finish designing costumes for one of the 10 schools that will compete for prime real estate in Brazil’s Carnivale. Comparable to designing for an opera, the undertaking is multi-layered, Costa said. “All of those schools are really schools that are teaching kids craft, basic ediuation, jobs. It’s all a living grid. It happens during Carnivale and people think it’s just Carnivale. But it’s really a social community,” he said. “It’s very interesting. It’s also very based on religion.”

Once the Rising Star awards got rolling at Cipriani 42ndStreet, Accessories (Handbags) winner Alida Boer, founder of Marias by Alida Boer, also voiced an empowerment message. After accepting the first award from presenter Jonathan Adler, she said, “This is not for me. This is for the 600 women who work on each bag. They are keeping our legacy and roots alive. In a world where fast fashion has taken over, they preserve more than just fashion. Fashion has become a vehicle to provide jobs, to show culture and to make the world a better place.”

High honors for Accessories for Scarves and Fashion Jewelry went to Stephanie Bijoux’s Stephanie Omens, who also spoke of the ripple effect her win would have to motivate young designers, especially those in her community of Atlanta. Fine Jewelry award winner Harakh’s Harkah Mehta acknowledged “the incredible artisans who preserve the ancient techniques that they’ve learned from their fathers or grandfathers.”

Post-Imperial’s Niyi Okuboyejo took home the Menswear Rising Star award. The Nigerian-born, U.S.-based designer said he is “looking forward to where the new Africa goes, and I think I am part of the journey.”

After Costa revealed Rakan’s Rakan Shams Aldeen as the Womenswear winner, the Syrian-born designer described how the war there initially railroaded his plans for a fashion career. But he persevered, living in a few different areas before relocating to the U.S.

A new addition to the Rising Star roster was the All Gender award, which was actually two — one for beauty and the other for fashion. “Maleficent” actress Michelle Pfeiffer wasn’t on hand to accept the All Gender award for beauty, but the company’s chief executive officer Melina Polly stepped in as her understudy. After being congratulated by presenters Cory Wade and the Phluid Project’s Rob Garrett Smith. Bossi Sportswear’s Alex Bossi took a moment to text his mother, before noting, “Whether it’s all gender, coed, unisex or whatever it is, my main goal with clothing is that when you put it on, you feel the most confident and that you can conquer the world.”

The first Maison De Mode-sponsored Sustainability award was given to Lutz Morris founder Tina Lutz, who comprehensively explained her commitment to advancing artisans, adhering to sustainability, as well as “responsible as possible” standards, and giving back — $10 per bag to Every Mother Counts.