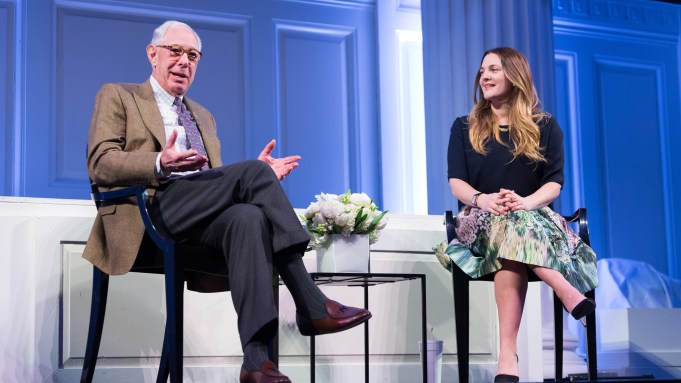 Drew Barrymore went first to Wal-Mart to build volume for her Flower Beauty brand, but now she’s eyeing direct-to-consumer and international as ways to expand the business. She’s even contemplating taking it a step further: “I’m in an above-the-neck world. I would love to create a lifestyle brand,” she said.

The charming Barrymore displayed her more ambitious side at Financo’s 26th Annual CEO Forum. The actress-director-producer-model-turned-mom and beauty entrepreneur had the luxury of being interviewed by her father-in-law and former Chanel Inc. president, Arie L. Kopelman.

After three decades in movies, “the business exercises different muscles for me,” she said. “This is exactly where I am supposed to be. Film makes you lazy.”

The other speakers were Jim Manzi, cofounder of APT, a predictive software firm that was acquired by MasterCard Co.; Imran Khan, chief strategy officer of Snapchat, and Sara Quinlan, MasterCard’s senior vice president of Market Insights.

Along with its new format, the all-in-the-family Barrymore-Kopelman dialogue and a relocation from the Harmonie Club to 583 Park Avenue, a former Christian Science church, to accommodate a larger crowd, the Financo Forum didn’t escape some controversy — as seems to be the case year after year. This time, eyeballs rolled when Quinlan gave a quick overview of the just-completed holiday season, telling the crowd, “It was a very good holiday period. Spending between Black Friday and Dec. 24 was up 7.9 percent, excluding automobiles and gas.”

Specialty apparel retail, she said, was up 9.2 percent and furniture was up 13 percent, although men’s apparel and electronics were “heavily negative.”

Her presentation contradicted what many retailers have said was a tough holiday season: particularly weak in women’s, with some exceptions seen in ath-leisure and fashion boots. The National Retail Federation last week said holiday sales — in November and December — rose 3 percent, excluding automobiles, gas stations and restaurants.

In the forum’s main event, the 40-year-old Barrymore gave her prescription for business success: great product to create brand loyalty, a good social media campaign, and being mindful of the importance of reviews. Her Flower brand, she said, blends “a luxury formula with mass prices, naturalness and color play.” The message is about pushing “inner beauty…a smile is better than any makeup,” she added.

About three years ago, she launched her brand in more than 1,500 Wal-Mart stores and is sold in more than 4,000. Now Barrymore’s caught the ambition bug, telling the crowd she wants to take the brand international, and not necessarily with Wal-Mart; she will be launching an e-commerce site — “our own platform” — this year.

“Really, at the end of the day, it’s not about me. Putting your name on a product,” she said, “is a dangerous business.”

Financo couldn’t have been a better place to make the pitch, given the contingent of overseas retailers attending, including the Toronto-based Hudson’s Bay Co., and the U.K.’s Marks & Spencer.

Barrymore advocated for authenticity: “There are so many celebrities slapping their names on a product. How do you create credibility? A little bit of time is crucial. Slow and steady wins the race,” adding it’s important to show that “someone is being themselves and is personally invested” in the business.

She also defended her decision to sell Flower exclusively at Wal-Mart in the U.S., which might seem like a surprising channel given her glam image and Wal-Mart’s low price structure and working-class appeal. “If you can find volume like that with another retailer, please introduce me to them.”

Manzi, a data expert, disputed the idea that retail is dying as consumers move online for their purchases. “In 2015, 92 percent of purchases occurred in the store. Only 7.5 percent of transactions globally were online,” he said. Online growth has been slowing down, gaining just 1 percent a year, he added.

Manzi also said the phrase “big data” was really a lot of “big hype.” Currently on the data front, “we can store more than what we can analyze,” he explained. For companies, the key is in knowing “how to use the data that they’re already capturing to make more money.” Manzi went on to say that given the data they capture on transactions, companies could overlay different factors such as demographics, weather and housing starts — even advertising spend by competitors — to figure out how and where to improve their business.

When Khan asked how many in the room use Snapchat, only handful of hands were raised. “We still have a lot to do,” he said, noting that communication on the platform begins with a picture or video that’s up to 10 seconds long. After noting that 60 percent of daily active users create content every day, Khan explained that it’s the one-to-one communication that drives frequency, which in turn drives consumption. “More than seven-plus billion videos are viewed every day on the platform,” he said.

The largest group of Snapchatters, at 37 percent, are between the ages of 18 to 24, followed at 26 percent by those between 25 to 34. The user base is split 50-50 among men and women. When Snapchat partners with brands for interactive ads, there’s a lift in both ad and message recall, he said.