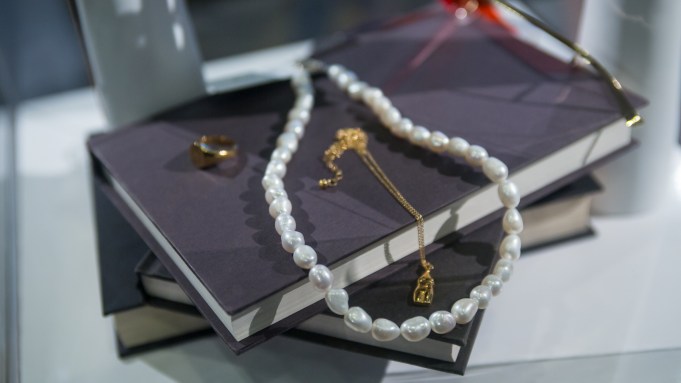 Fiona Morrison started making jewelry in college, creating pieces for her friends. The after-school project was her way of “avoiding looking for a job,” according to the Canadian entrepreneur.

But that after-school side project turned into a job of its own a few years later, in 2013, when Morrison launched Wolf Circus, a line of sustainable demi-fine jewelry, or pieces made with gold-plated silver. Today the company boasts a revenue increase of 86 percent from 2014 to 2018 — and has more potential to grow.

Some of fashion’s biggest players seem to agree. On Wednesday, Morrison won the Fashion Institute of Technology’s $100,000 grand prize after pitching her business plan in front of names like Tommy Hilfiger and his wife, Dee Ocleppo Hilfiger; Morris Goldfarb, ceo of G-III Apparel Group; Marc Schneider, ceo of Kenneth Cole Productions; Adrienne Lazarus, ceo of Bandier; Thomas Ott, chief merchant of Saks Off 5th and Gilt; Henri Zirpolo, senior designer at Rag & Bone, and about a hundred family and friends.

“I wasn’t expecting to win,” Morrison told WWD. “I feel so excited and thankful for this opportunity and I’m so excited for Wolf Circus’ next step.”

Wolf Circus plans to move its office and increase its product team with the $100,000 prize money.

“And I’m going to treat all my employees to facials,” said Morrison, clearly glowing from the win herself.

Morrison was one of 25 teams in FIT’s Design Entrepreneur program. For the past seven years, the program, sometimes referred to as a “mini fashion MBA,” serves as a bootcamp for emerging fashion professionals, with apparel, accessories or footwear start-ups, to brush up on their business expertise.

“These designers already know how to make their product, said Jeanette Nostra, FIT’s executive in residence for the Design Entrepreneurs program and the evening’s moderator. “We concentrate on good business skills. Our goals are to give them the skills to create a business plan that will help them be successful.”

The six-month program, includes three intensive hands-on weekends in the classroom. At the end, students, or sometimes teams of two or three people, are assigned a mentor. Over the next three months, mentors work with students to develop their business plans. Then 12 are selected to present in front of a panel of fashion industry experts. The judges change every year — this year there were 17.

The 12 finalists are narrowed down to four on pitch night and two winners are selected. In addition to Morrison, Nora Gardner, founder of her namesake brand, walked away with the second prize, the Israel Goldgrub Award, which includes a $50,000 stipend.

“I come from a finance background,” said Gardner, who worked at Morgan Stanley for six years before launching her ready-to-wear women’s apparel line for professional women. “So to be recognized in a new industry is an absolute honor. And I’m so happy that the competition is over.”

G-III’s Goldfarb, who is also the founding sponsor of the event, said he wouldn’t miss the event “for the world.”

“I’ve been here since the [program’s] inception,” he said. “This is one of the feeders into our industry. The concept here is to give these people a little bit of a boost [financially] to bring them into the industry.”

And even though there are only two winners, Nostra said many of the other finalists leave the program having caught the eye of leaders in the industry.

Hilfiger said he often finds new hires straight out of FIT. Bandier’s Lazarus said she reached out to Soni Borcar and Eefje Dierickx, the team behind swimwear label Mei L’ange, after seeing them present.

But despite the added exposure the program brings, learning from seasoned professionals is perhaps the most valuable takeaway.

“When you’re young and first entering into this business — because I remember doing that — I think when you come in with more fresh, naive eyes you don’t see some of the pitfalls that are right in front of you,” Ocleppo Hilfiger said, such as overspending or poor quality. “To have someone like Tommy, who has more than 30 years experience in this business, [who] has made a lot of mistakes, hopefully he can help someone.”

Hilfiger said those mistakes included going bankrupt at 23 years old after starting his company at 18.

In fact, the fashion icon said a successful company is a perfect fusion of business prowess and artistic talent.

“A lot of designers will come up with a great product but they have no ability to execute or have no idea how to market it,” Hilfiger explained. “It takes all those things working together. It’s like a complex recipe where you need a lot of different ingredients all working together at the same time.”

Even so, Hilfiger said he’s on the lookout for something new.

“We don’t need more of the same,” he said. “We’re hoping we find the next big fashion star. It’s kind of exciting, because when you look at all the different designs that will be showing, there just might be one that really stands out.”