Social media has turned the fashion world — and just about every other world — upside down. 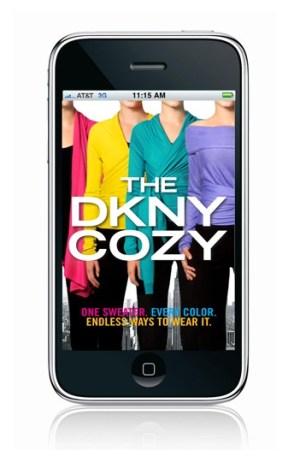 Social media has turned the fashion world — and just about every other world — upside down. This year, Dolce & Gabbana was so enamored of bloggers, the company sat them in the front row, displacing some department store executives.

Designer houses like Louis Vuitton are live-streaming their fashion shows; Ralph Lauren, Chanel, DKNY and Gucci are among the many labels with iPhone apps, and Alexander McQueen is tweeting. And now the idea that “if you are not online, your customers will be” is a standard theme at conferences.

Social media “is shifting the power away from traditional marketing and advertising and is really empowering the consumer in many really profound ways,” said “Shoptimism” author and former Esquire editor in chief Lee Eisenberg.

The phenomenon is changing the world from a broadcast one-to-many format to a many-to-many interactive conversation. Every person with a networked computer is empowered to find like-minded others; to share and publish; to create an audience or a market, and to collaborate with others to create things.

The traditional print ad in a magazine is no longer the only way to communicate with the public. A brand can talk directly through its own Web site, Twitter account, Facebook page or via new kinds of “ads” such as sponsoring a contest on Polyvore. Polyvore members create collages using products from the sponsor and other images and share them all over the Web.

Besides creating a whole new vocabulary, social media has made the world even smaller. What the fashionable are wearing in Milan, São Paulo, Tokyo or Hollywood can be discovered with a click of a mouse. Stylish young women with more time than money blog about fashion, share photos of what they are wearing on outfit-sharing sites such as Chictopia, follow the eye of streetwear photographers such as Face Hunter or The Sartorialist, or check in on celebs on such sites as Fab Sugar and CelebrityFashion.

Brands have responded to the social media explosion by jumping onto the five major social networking sites: Twitter, Facebook, YouTube, MySpace and Flickr. Some, such as St. John and Juicy, even have their own networks. Typically, brands post about events and discounts. Some blog about what inspires them. Ad agencies create multichannel campaigns that invite customers to upload, post and participate.

There is a downside, however: The comments and photographs of real customers don’t always jive with carefully cultivated brand images.

In short, social media is fast becoming one of the ways people communicate every day, just as they use the telephone.

In Europe, luxury goods companies leapt into the social media arena with both high profile and under-the-radar projects, directly courting the end consumer.

In October, to mark the launch of Gucci Eyeweb, a new collection of sunglasses aimed at “the digital generation” of 18- to 25-year-olds, the brand unveiled a global, multilingual social networking micro site, Guccieyeweb.com, that asks users to upload and share photos.

The pictures rotated over a 3-D image of the sunglasses, looking as if they were reflected in the dark lenses. Gucci has since swapped the $220 glasses with ski goggles so users can upload and share their winter snaps and Gucci photo galleries on Facebook and Twitter.

A week later, with the social momentum building, the brand unveiled its first iPhone app, which features a 24-hour music channel, hotel and restaurant tips, playlists and a track-mixing option designed by producer Mark Ronson.

The free app also gives iPhone users the opportunity to purchase an exclusive model from the limited edition Ronson sneaker collection when the Gucci Icon-Temporary store opens in their respective cities.

Gucci creative director Frida Giannini said it was important for the app to stand alone from the Web site and to include unique content, such as the playlists, the Gucci music channel with a live stream of songs and Gucci Beats, which offers a virtual turntable where users can mix their own music, scratch it and send it via e-mail or post it on Facebook.

In November, Burberry launched its much-anticipated Artofthetrench.com, a noncommercial site that celebrates the company’s most iconic design and aims to bring fans closer to the brand.

“It’s a way for our fans to interact with the culture of the brand and with the emotional aspects of the trenchcoat,” said chief creative officer Christopher Bailey, one of the first designers to invite bloggers to fashion shows and famous for keeping Burberry fans updated on his work via YouTube and Facebook.

The new site features photos by Scott Schuman of The Sartorialst of people young and old from cities around the globe sporting trenches. And while other collaborations are in the pipeline, Bailey said the site’s content will “always be about the trench.”

While Gucci and Burberry may have launched high-profile projects, brands ranging from Christian Dior and Hugo Boss to Camper, Topshop, Sonia Rykiel and Rena Lange began to embrace social networks with vigor — tweeting, blogging, posting and streaming their way into customers’ hearts and pocketbooks.

McQueen, quite possibly the year’s biggest convert to digital media and social networking, streamed his spring show live in an artsy collaboration with SHOWStudio.com. It was a spectacle that hit a new technological benchmark, despite the site crashing after receiving a reported 29,000 hits in one second.

Since the start of September, the famously private McQueen has been tweeting regularly on twitter.com/mcqueenworld.

“I’m doing it when I come home from a club at 4 a.m. I’m doing it if I see something on telly,” he said. “I love the fact that my messages are coming right from the horse’s mouth — and I feel like I’m speaking to a company of friends. I do it so much that someone needs to get me a gag!”

But mostly, the social media revolution is not about the brands. It’s about individuals connecting to other individuals on a mass scale.