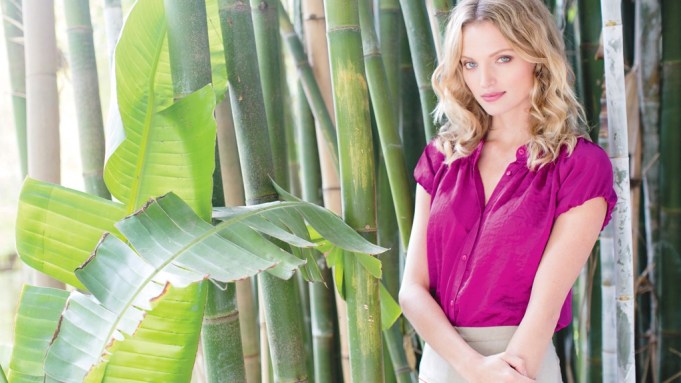 LOS ANGELES — The demand for Made in USA is growing thanks to an unlikely market: foreign fashion and accessories brands.

Designers from the U.K., Holland, Japan and even China are turning to the U.S. as a source for making everything from jeans and silk blouses to fast fashion.

Consider Jigsaw London, which launched its U.S. manufacturing program five years ago by creating woven tops that could be paired with sweaters and trousers in its U.K.-designed contemporary line. Having increased the selection of U.S. goods by 20 percent each season, Jigsaw London now designs and manufactures half of its collection that’s sold in its four U.S. stores and domestic e-commerce in Los Angeles.

“It’s a really unique time in retail to do that — to think globally and act locally and maintain your brand integrity to suit your customer,” said Mary Nagel, U.S. design and merchandise director at Jigsaw London. “If the style is right, the color is right, the price is right, she’ll buy it.…If it’s made in America, it’s an added benefit.”

The growing interest of foreign companies to produce in the U.S. reveals another angle to the resurgence of domestic manufacturing. The foreign brands want to be able to make clothes specifically — and at a quicker pace — for the important U.S. market, where trends and consumer demands differ from what percolates in their home markets. Also, in the case of Chinese companies, they are interested in taking the U.S.-made fashion back to China, where they can appeal to the growing Chinese middle class, which demands better quality, often synonymous with the Made-in-USA label.

The business from the foreign companies could be a boon to the Los Angeles-based denim wash houses and factories, which might see a shift as American denim designers head to Mexico, Turkey and Tunisia in order to avoid the hefty European Union tariff on women’s jeans imported from the U.S. Another impetus for exporting fashion goods from the U.S. is favorable terms allowed under trade agreements including the North American Free Trade Agreement and the Central American Free Trade Agreement, which make it cheaper to import product to Mexico and Central America from the U.S. than from China.

Even Sir Philip Green, owner of Arcadia Group, the U.K. retail conglomerate that owns fast-fashion brands such as Topshop and Miss Selfridge, sees no objection to testing U.S. production. Complementing the clothing churned out by factories in China, Romania, Turkey, Mauritius and India, Topshop already offers higher-priced tailored pieces made in Britain for its subbrands Boutique and Unique. “Why not?” Green said when asked about the idea of manufacturing clothes in the U.S. “[It’s] worth looking at it.”

G-Star Raw is pursuing the idea. It modeled its localized design and manufacturing process for the U.S. after a successful program in Japan, where the Dutch denim brand codesigned special pieces with influential Japanese retailer United Arrows. Last fall, G-Star hired denim designer Tom Cawson in its Los Angeles office.

“We’re working on Made-in-U.S. product,” Cawson said. “It’s very, very early stages. My role in the U.S. is really what you call concept design. I’ve been helping the sourcing guys find places where they could do it.”

Certainly, the biggest challenge for foreign companies that want to manufacture in the U.S. is tracking the supply chain.

“We can’t find them,” said Ilse Metchek, president of the nonprofit trade group California Fashion Association. “How is an outsider going to find them?”

Tradegood, a division of Britain’s Intertek that connects suppliers with buyers, hopes to fill that role. In February, it hosted nine Chinese manufacturers that have more than 10 years of experience making textiles, apparel and accessories on a trip to Los Angeles, where they were keen to emulate the success of fast-fashion retailer Forever 21.

“A lot of them look at that as the model,” said André Raghu, Tradegood’s chief strategy officer.

In contrast to the foreign corporate takeovers that swept the U.S. in the Eighties, Raghu predicted that the Chinese businesses would lean toward making direct investments of $20 million to $100 million in domestic facilities or establishing joint partnerships with American companies. Faced with shutting a business, the U.S. companies that are under pressure would be inclined to cooperate, he said.

“By next year, there will be solid partnerships in place,” he said. “There’s going to be this harmonious win-win environment.”

To be sure, salaries for U.S. factory workers eclipse those of their counterparts in developing countries. Business consultancy A.T. Kearney estimates that a worker earns about $80 a month in Bangladesh, $300 to $400 in China and $1,500 in the U.S.

For the first time since 2001, the U.S. reclaimed the top spot in this year’s index of overall foreign direct investment compiled by A.T. Kearney. In the same list, China fell to second place from last year’s top spot.

Los Angeles-based DSP Group recently met with Chinese factory owners who sought advice on starting operations in the U.S. A full-package manufacturer that’s worked with designers from Sweden, Argentina, Canada and Japan, DSP can offer what the Chinese companies lack: experience in building a brand.

“They have no clue about branding,” said David Perry, owner of DSP Group. “The Chinese business model in apparel is purely producing. The Chinese middle class is saying, ‘We want something more authentic.’”

Chris Callieri, a principal at A.T. Kearney in Washington, acknowledged the validity of a Chinese company building a brand in the States and selling it to Chinese tourists visiting the U.S. before introducing it to China. After all, between 2000 and 2005, the average life cycle of the top 500 domestic brands in China was just 18 months, according to a report published by A.T. Kearney last May. The same study stated that the growth of China’s apparel industry — estimated at 14 percent — is likely to outpace the projected 7 to 8 percent rise in gross domestic product.

“If you look at Chinese luxury buyers, many of them are buying a share of their luxury goods not from China but in Europe and the U.S. when they travel,” he said. “Could there be a case where, with the amount of Chinese tourists that come to the U.S. every year, you have a new brand that has a presence on Fifth Avenue and it’s cool and you create a following you can then tap into by developing your own stores in China? It’s a strategy.”

There’s also cachet to Made in USA. Linesman Clothing, a high-end manufacturer in Commerce, Calif., signed directional Japanese label Beams as its first foreign client last year. After finessing the designs for two shirts, a jean jacket, chinos and five-pocket jeans in Japan, Beams shipped the samples and specifications for the garments to Linesman, which produced 4,000 units that were eventually sold at Beams’ stores in Japan. Eddie Flores, a partner at Linesman, has been lining up a meeting with another Japanese company interested in domestic manufacturing. His partner, Alan McGrath, expects others to follow.

“I do believe there is going to be a move,” McGrath said. “Within the next 12 months, mark my words, there will be significant names from Hong Kong who will manufacture here.”

For Shasa, the fast-fashion women’s retailer that has a major presence in Mexico and Central America, its history of U.S. manufacturing started shortly after the enactment of NAFTA. The company opened a buying office in downtown Los Angeles in 1995, and soon after exported its Made-in-USA clothing to its first store in Mexico City. Since then, Shasa has expanded its retail network to El Salvador, Honduras, Costa Rica and Texas, and it plans to unveil the 100th store in Glendale, Calif., in October. Now, the design team is split between Los Angeles and Mexico City, and more than half of its apparel is sourced in the U.S., almost all in Los Angeles.

“NAFTA made exporting a lot of amazing U.S. fashion easy,” said Alicia Brockwell, Shasa’s marketing director. “We took ‘Made in the USA’ as a brand position. All the signs are in English. Everything is in English. We really sell Made in the USA.”