PPR’s soft-spoken chief continues to expand the luxury house while staying true to its roots. 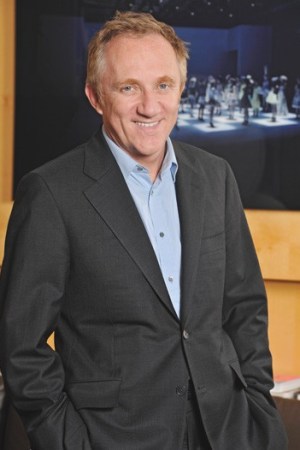 When PPR swept in as a white knight in a 1999 bidding war and took majority control of Gucci Group, it was with the intention of building a luxury conglomerate around the powerhouse Italian brand. Indeed, the French retail giant would go on to build on the stable of names that came with the group, including Yves Saint Laurent, Balenciaga, Sergio Rossi and Boucheron.

At the time of the initial foray into fashion, it was a common belief — among analysts and executives alike — that established luxury names were nearing “maturity,” spurring important players to build a wider range of brand portfolios to bolster future growth prospects.

François-Henri Pinault, chairman and chief executive officer of the 14.61 billion euro, or $19.39 billion at current exchange, PPR, says he shared that view at the time but has since witnessed a changed world of burgeoning wealth and luxury aspiration that has lifted Gucci to new heights, shattering any preconceived ideas about any ceiling for the 90-year-old brand.

“We found out that the potential of the brand is even greater than we could have ever imagined,” Pinault said during an interview in a small conference room at PPR’s headquarters on the Avenue Hoche in Paris, the walls adorned with art photography. “The Gucci brand is very far from reaching maturity.”

In the 10 years since the acquisition, Gucci’s profitability has improved, at constant exchange rates, by five points, or roughly 30 percent, he noted.

An enthusiastic observer of shifting consumer sentiment and economic fluctuations, Pinault said he believes Gucci — which has doubled its size since the initial acquisition — can repeat the feat again, thanks to fast-growing emerging markets such as Mainland China, where Gucci today operates 39 boutiques. He gave no timeline.

“The phenomenon is structural,” said Pinault, explaining how, in a stagnant environment, large luxury players could be obliged to go down-market to increase the size of their businesses. Instead, with wealth increasing across wide swaths of the globe, dominant players have been able to trade up to meet increasingly sophisticated and demanding consumers worldwide.

“I think this brand has in its genes the capacity to continue growing at a very important rate, which was not what we thought at the start,” he said, characterizing the goal to double again as “ambitious” and “far from easy” but nevertheless possible.

In tandem with the rise of emerging markets came a need to undo the “uniformity” of luxury that was in vogue in the Nineties, when the sector’s fortunes were tied mainly to developed markets like Western Europe, Japan and the U.S.

Today, store experiences and assortments are tailored to local needs — while keeping a strong brand consistency. This is key, because luxury consumers travel the world and visit and compare boutiques, Pinault observed. To wit: Gucci now produces about 1,800 references in handbags every year, all expressing “the same values,” allowing its network to avoid homogenous assortments and address local preferences.

“This brand has in its history all the elements to adapt,” Pinault stressed, referring to its long history of made-in-Italy know-how and a rich archive of iconic design elements, from horse bits and interlocking Gs to a range of signature prints. “That’s something profound. It’s something tangible in the luxury world.”

An earnest and thoughtful executive with a warm, open demeanor, Pinault expresses a strong attachment to Gucci as an embodiment of Italian style, and he keeps close tabs on the brand strategy. Once a year, he spends a full day with Gucci ceo Patrizio Di Marco at the brand’s Florence headquarters, reviewing the strategy, from product initiatives to communications, focusing on brand positioning.

The most pivotal brand in PPR’s luxury arsenal — Pinault calls it the “spinal column” of the luxury goods division — Gucci is key to what he calls “soft synergies” — essentially sharing business insights and know-how.

“Gucci, by virtue of its size, its geographic reach and its product range, has explored every territory ahead of other brands and, learning from its errors, made extremely intelligent decisions. Therefore, it’s a very important brand to follow simply to share experiences with others,” he explained.

For example, he said Gucci’s Florence workshops — or Bottega Veneta’s near Venice — were at the disposal of outgoing YSL ceo Valerie Hermann when she sought to build that French brand’s small leather goods category. All the brands also have at their disposal Gucci’s ready-to-wear atelier in Novara, just outside of Milan, for making prototypes — or, in the case of younger brands like Stella McCartney and Alexander McQueen, for producing their collections.

The group has also centralized logistics and distribution into a hub in Cadempino, Switzerland. “Time-to-market with luxury is essential,” Pinault stressed.

Executives at monobrand firms can be isolated. Frederick Lukoff, who joined McCartney in early 2009 after stints at Lanvin and Paco Rabanne, related to Pinault that it’s “like night and day” working within a group. “Here, you pick up the phone, you call another brand and you have an answer in 10 minutes,” Pinault said, quoting Lukoff.

Given its long experience, the Gucci brand has “had many lives,” according to Pinault, and enough history and brand attributes to see it survive, and thrive, through different eras.

Recalling the times of Tom Ford and Domenico De Sole, Pinault lauded Ford for ramping up the modernity and fashion factor, awakening a sleepy name with pulse-pounding contemporary fashions and his heat-seeking-missile knack for marketing. “[Gucci] became avant-garde in fashion. It became a brand that dared,” Pinault recalled.

Frida Giannini, who took the sole creative helm in 2005, activated different values of the brand, including its heritage and craftsmanship at a time when consumers began shunning bling. “It was always there; we just reactivated it,” Pinault said. “Frida works in a different way.”

Plainly fond of the talent of designers to divine not only colors and shapes but also underlying shifts in mood and aesthetic direction, Pinault broke into a smile as he discussed Giannini’s creative capacity and the Rome-born designer’s complicity with Gucci.

“Frida — she incarnates the Italian values of the brand: sophistication and savoir faire, the lifestyle,” he said. “What’s more, she is not only a real artist, but someone who is very organized.”

He lauded Giannini for her ability to manage the complexity of designing for a global megabrand, able to exert an “enormous influence” on multiple product categories and collections and not only the most visible ones that appear on the runway and in advertising campaigns. “She really follows all aspects of the brand, including communications, events, the Internet,” Pinault said.

Yet he is equally impressed with her curiosity and quest for inspirations. He vividly recalls his first lunch with her, then PPR ceo Serge Weinberg and her then design associate Alessandra Facchinetti, at Guy Savoy back in 2003. The two women arrived after a trawl through the famous Saint-Ouen flea market, filling a small truck they piloted themselves with their discoveries. For Pinault, it was a telling symbol of Giannini’s passion for fashion and design.

“Thanks to the creativity of Frida and being faithful to our heritage, our craftsmanship and the innovation that is inside the brand — if we can be consistent on all this under Frida’s leadership in terms of creativity, well, the brand has a bright future for sure,” Pinault said.