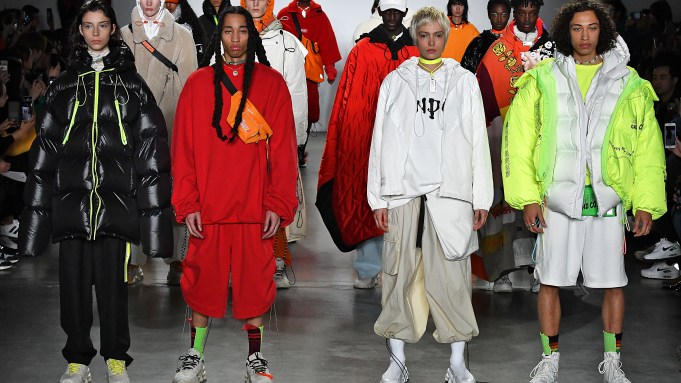 Some of China’s leading fashion brands took the stage last week for a third season of “China Day” at Pier 59 Studios in the Chelsea neighborhood of Manhattan.

Designers Peacebird Men and NPC showed their fall 2019 collections, which had the theme “Youth-Made China.”

The idea was to express “Chinese culture seen through the prism of youth,” organizers noted. Designers showcased during the past two seasons include Li-Ning, Clot, Chen Peng, JNBY, Particle Fever and Angel Chen as well as Peacebird Men.

China Day is organized by Suntchi, a leading Chinese entertainment company. As in past iterations, this year’s event was done in partnership with the Council of Fashion Designers of America and coincided with New York Fashion Week.

Aiming to boost the worldwide recognition of Chinese designers, China Day serves as a platform for up-and-coming Chinese design talent and as a barometer for appealing to a supercharged luxury consumer group. As recently reported in WWD, consumers under 40 are driving luxury spending in China.

In attendance were Chinese and American influencers, as well as artists Reilly of “Hey Reilly” and Trevor Andrew (preferring the monikers “Gucci Ghost” and Trouble Andrew) — who both collaborated on the collection.

NPC, which stands for “New Project Center,” showed for the first time this year at New York Fashion Week under China Day. Founders Wilber Pan and Nic Li noted inspiration in “space exploration” and the celebration of the brand’s 10th anniversary. Collaborations helped tie the inspirations into the overall theme of “Youth-Made China.”

The shows incorporated a fusion of traditional Chinese culture with modern street fashion and futurism.