Funds Pour In for Notre-Dame Cathedral

“Everyone wishes to give life back to this jewel,” said François-Henri Pinault, Kering chief.

By Mimosa Spencer
with contributions from Jennifer Weil, Fleur Burlet
on April 16, 2019

PARIS — Notre-Dame Cathedral was still burning Monday when the pledges began to flood in.

“Faced with this tragedy, everyone wishes to give life back to this jewel of our heritage as soon as possible,” said François-Henri Pinault, chairman and chief executive officer of Kering and chairman of his family’s investment arm, Artémis, as the fire continued to burn into the night.

The luxury titan added in a statement that he and his father, François Pinault, would contribute 100 million euros of Artémis funds, “as of now to take part to the effort needed to fully rebuild Notre-Dame de Paris.”

LVMH Moët Hennessy Louis Vuitton and the Arnault family also pledged funds and assistance, calling the fire a national tragedy and offering 200 million euros to a fund for reconstructing the “extraordinary cathedral, symbol of France, its heritage and its unity.”

The luxury group added it would also contribute the help of creative, architectural and financial specialists to help with the fund-raising process — already under way — and reconstruction.

Antoine Arnault, head of communications at LVMH and ceo of Berluti, on Tuesday surveyed the damage, meeting with church officials, including Patrick Chauvet, the top-ranking administrator of Notre-Dame, as well as French Interior Minister Christophe Castaner. 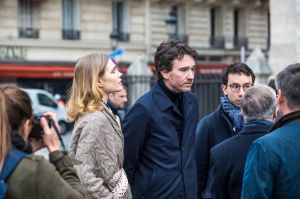 By late Tuesday, according to AFP calculations, contributions from the private sector surpassed 700 million euros, the bulk of funds coming from wealthy French families.

“I am very glad to see the fashion industry giving the example in funding the restoration works,” said Ralph Toledano, president of the Fédération de la Haute Couture et de la Mode, French fashion’s governing body. “Notre-Dame de Paris is certainly a place of the utmost importance for Christians. But this monument goes beyond this role as it is history, art, culture, architecture, Paris, France — but also a part of the world patrimony. It belongs to humanity.”

Leonard A. Lauder, chairman emeritus of the Estée Lauder Cos., said his company and family will be making a joint contribution to restoration efforts. His earliest memory of the cathedral stems from his first trip to Paris in the summer of 1953. “I couldn’t believe that I was there,” he said. And his favorite — “At a festive dinner in the Tour d’Argent at night, when Notre-Dame was all lit up. Paris forever.”

Michelle Obama, who was on the Kering-sponsored Paris leg of her tour to promote her memoir “Becoming,” spoke to a crowded arena in Paris and recalled hearing about the fire.

“I don’t think my feelings were different from anyone’s — it was disbelief at first, the security driver…said, ‘Notre-Dame is burning,’ and I thought, ‘he must be joking!’

“It didn’t really hit me until I saw the images that all of you saw and all that ran through my mind was all that that cathedral meant in my small life,” she said.

“Paris was my first international experience as a little girl…that trip meant the world to me,” added Obama.

“We have to be strong in times like this, we have to believe in each other, we have to use these times to unite, because Notre-Dame will be rebuilt,” she said, prompting applause.

Speaking on Monday night in front of the cathedral, still ablaze, President Emmanuel Macron had announced that a “national campaign” would be launched to help rebuild the monument, as an outpouring of emotion seized social networks around the world, with people expressing shock at images of smoke and flames spilling over the gargoyles and flying buttresses of the centuries-old monument.

“This cathedral, we will rebuild it all together,” Macron said on French television channels.

Through the early hours of Tuesday morning, people thronged along the banks and bridges of the river Seine and on Île Saint-Louis to stand vigil as flames engulfed the cathedral. Onlookers mostly remained silent, while others solemnly sang hymns, filling the night air with melodies that were sometimes punctuated with applause in support of fire trucks, which were entering or leaving the site.

Speaking on Europe 1 Tuesday morning, as the city was waking up to assess the damage, Pinault recounted how he and his family were shaken by the devastation.

“It’s a tragedy that has touched us all.…I saw my 17-year-old daughter crying in the front of the images—it’s something that shook us, my father as well, and we wanted to act immediately — it’s an absolutely unbelievable challenge,” he said.

A lot of people would likely contribute as they could, he noted.

“I believe it is very important that we be united around this symbol that is the symbol of our heritage, it’s our history that’s at stake, our culture, and, in some respects, our national pride. I think it concerns everybody,” added Pinault.

Public and private fundraising sites cropped up around the globe, including a crowdfunding platform dedicated to French heritage sites called Dartagnans, which generated nearly 52,000 euros by midday Tuesday, and Leetchi, which had nearly 27,000 euros of funds to finance repair work on the monument, collected on Tuesday, from more than a thousand donors.

“I don’t think anyone can be indifferent to this cathedral,” she said, speaking on French radio channel France Inter. Hidalgo pledged 50 million euros from her office, listing funds that could be tapped into for restoration work, including a city church fund set up recently. The mayor said she plans to organize an international conference of donors, hosted in the Hôtel de Ville, or city hall, where rescued historic pieces from Notre-Dame have been stored for safekeeping — including the Crown of Thorns and the tunic of Saint Louis, which were rushed to safety by a human chain of firefighters and city workers.

After nine hours battling the flames, firefighters managed to extinguish the fire a little before 10 a.m. on Tuesday. Around 400 firefighters were mobilized, and two policemen and a fireman were injured, according to Paris firefighters.