The end game for The Jones Group Inc. is fast approaching — and it’s making for some interesting pairings. 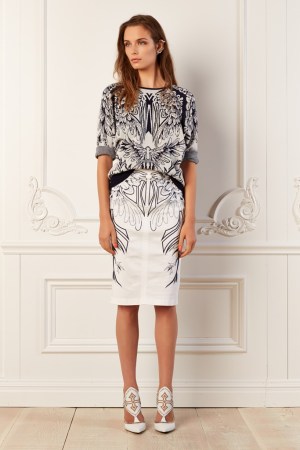 NEW YORK — The end game for The Jones Group Inc. is fast approaching — and it’s making for some interesting pairings.

Sources said the company, which hired Citi this summer to explore strategic options, is in advanced talks to sell its apparel business to G-III Apparel Group and the footwear unit to Sycamore Partners.

Jones is set to report third-quarter earnings Oct. 30. An agreement could be ready by then, but the process of splitting up the company is said to be extremely complicated and the timing of a deal is still uncertain.

For G-III, which produces licensed goods under a host of brands, including Calvin Klein, Kenneth Cole and Tommy Hilfiger, the deal would significantly increase its size and position in the industry.

The $1.4 billion company, led by chairman and chief executive officer Morris Goldfarb, has been looking to grow through acquisition and this month inked a $50 million deal to acquire G.H. Bass & Co. from PVH Corp.

If G-III buys the Jones apparel business, it’s not clear whether it would keep all of the brands or resell some of the portfolio. Jones has about 35 brands overall and the apparel business includes Rachel Roy at the designer tier, Jones New York sportswear at better prices, Gloria Vanderbilt at moderate prices and L.E.I. in juniors.

G-III executives could not be reached for comment Friday.

Word that Sycamore was making a move for the footwear business — which includes the higher-end Stuart Weitzman and Kurt Geiger brands as well as Nine West — came was a surprise to some. It is not clear whether Sycamore plans to operate the businesses on its own or enlist the help of a partner if the deal goes through.

Headed by Stefan L. Kaluzny, the private equity firm has been building its fashion profile, snapping up a sourcing division that was part of Limited Brands Inc. as well as The Talbots Inc. and Hot Topic Inc. Sycamore also has a stake in Aéropostale Inc.

Initially, Sycamore was said to have been looking at the apparel business and was paired with KKR & Co., which later dropped out of the process. That prompted Sycamore to reconsider.

Jones had sales of $3.75 billion last year and in the first half of this year logged a net loss of $2.9 million on revenues of $1.85 billion. Shares of the company rose 2.3 percent to $15 on Friday. That gave it a market capitalization of $1.1 billion and, adding in debt, an enterprise value of $1.94 billion.

Jones drew interest from a range of would-be investors during the auction and bids were submitted for the entire company and its various parts.

Sherson Group, a longtime licensee of Jones’ Nine West footwear brand, hired Jack Hendler, president of investment bank Avalon Net Worth, to pursue an acquisition of the moderate footwear portfolio. Other players, such as Leonard Green & Partners LP, Golden Gate Capital and Iconix Brand Group Inc., were said to have looked at the company or expressed interest in its various parts.

Jones began to feel heat from Wall Street this year. Activist investor James Mitarotonda, head of Barington Capital Group LP, took a stake in the company and ultimately took a seat on the board in May. That gave him a platform to push for changes at the business from within.

A deal would mark the end of an era for Seventh Avenue, where Jones, along with Liz Claiborne Inc. and Kellwood Co., lorded over large portfolios of brands focused on department stores — and supported the lines with significant markdown money. That model largely fell apart after Federated bought May Co. in 2005 and formed Macy’s Inc., concentrating power in the department store channel and intensifying focus on exclusive brands.