The department store operator has plans to operate 10 stores in China and reach 1 billion euros in the market by 2025.

SHANGHAI — Galeries Lafayette believes its China operations can become a 1 billion euro business and the French retailer aims to have 10 stores across the nation by 2025, including a new store here that soft opened Saturday and a Beijing unit.

Chief executive officer Nicolas Houzé was touring the company’s newest store in Pudong, a five-story, 270,000-square-foot space situated in the recently developed L+Mall. The store is the second Galeries Lafayette in China after its first foray into the market with a Beijing unit in 2013 as part of a 50/50 venture with I.T Group.

“We are targeting around 10 stores in China and we think that we could reach the 1 billion euro turnover for China, which will make it the biggest country [sales-wise] after France,” Houzé told WWD.

By 2025, the retailer plans to open in some of the fastest-growing cities in China, with the brand currently looking at opportunities in Guangzhou, Xiamen, Suzhou, and Chongqing, although plans have yet to be finalized.

“Right now, we should look also to smaller ones, much more on the concept store [level] than department store, so that could be 10,000- to 15,000-square-meter [161,000-square-foot] stores,” he added. “That is also a way to [speed up] the opening of the store, because it is easy to find smaller locations and that is why we will be doing those kinds of openings in the future also.”

New retail supply in China’s 17 major cities, including Shanghai, is forecast to total 7.6 million square meters, or 81.2 million square feet, in 2019, with nearly 60 percent of new retail area being operated by experienced developers, according to CBRE’s 2019 report on the Greater China real estate market. 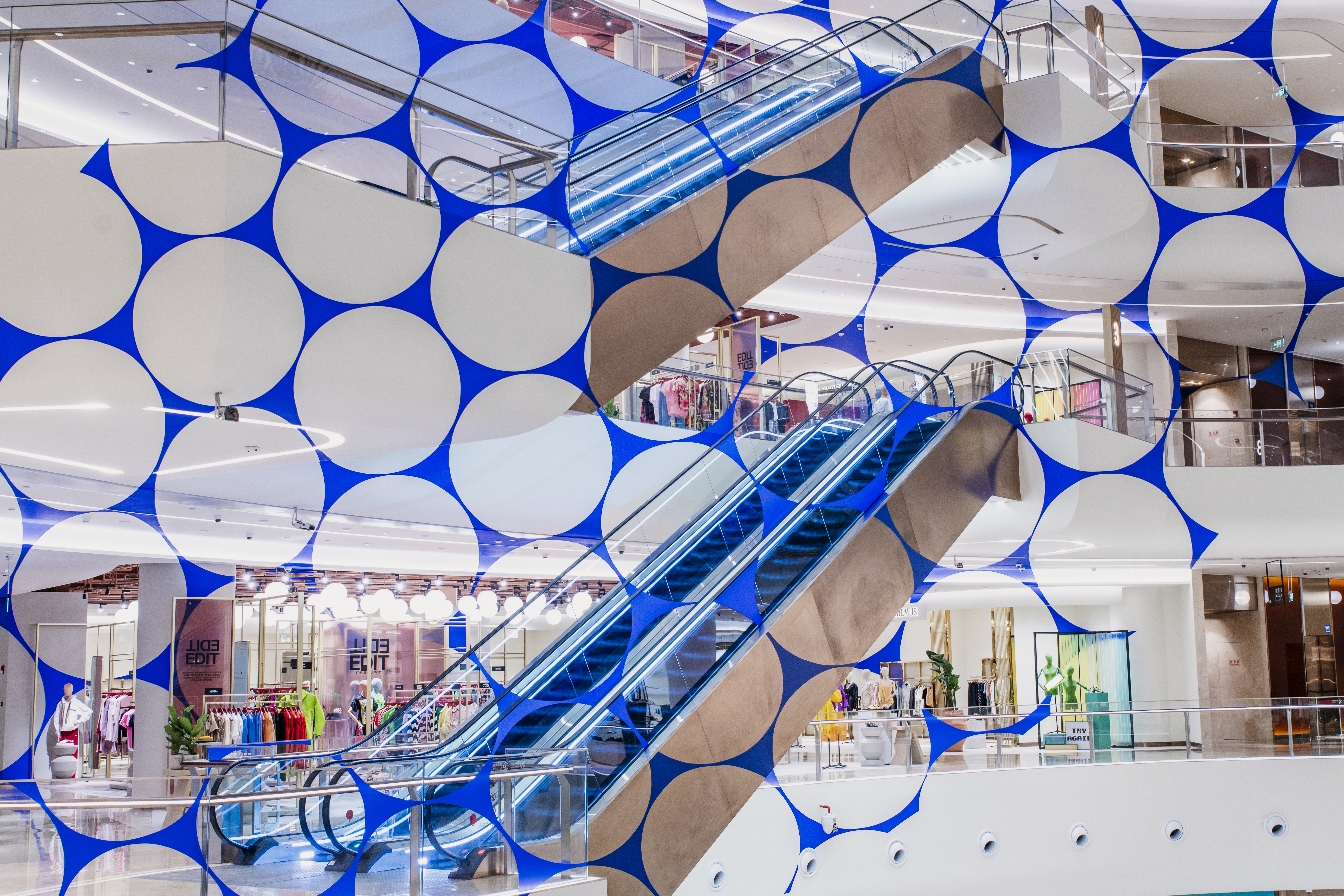 The new store is located in the new L+ Mall, which is directly connected to three grade A office towers.  Courtesy

Houzé is confident that the company will be able to locate prime real estate in its search across China for new store locations. “We can find spaces in the best cities. Galeries Lafayette is still a hot brand and all the developers want to work with Galeries Lafayette. So, we will manage to open stores,” he said.

The company’s Haussmann location in Paris has been especially successful in attracting and brand building amongst Chinese shoppers. The Chinese contingent accounts for half of all foreign visitors at the Haussmann store, which attracts 37 million visitors a year, according to the retailer.

Galeries Lafayette’s opening in Pudong, as opposed to Puxi, can be viewed as a turning point for the area, accelerating its development into a more diversified shopping hub. Most of Shanghai’s shopping hot spots are in Puxi, west of the river, in the Former French Concession, East and West Nanjing Road, and Huaihai Road.

“The catchment is 600,000 workers and residents, so we think there is real demand,” said Philippe Pedone, senior vice president, international, of Galeries Lafayette and BHV Marais, referring to the three office towers L+ Mall directly connects to providing a steady flow of traffic.

“Our target is also to target the Millennials — well-educated, well-traveled, and eager to learn more about fashion, rather than just luxury,” Pedone said. “We are close to IFC, which is 100 percent luxury with big flagship luxury brands, but our concept is different. We want to be complimentary to IFC, not the competition from IFC.”

Michael Ball, director at JLL’s China Retail team, said he believes the new L+Mall in Pudong will succeed in attracting people from across the city and across age and socioeconomic groups. He cited L+ Mall’s links to four metro lines and good road accessibility as “making it one of the most easy to reach malls in Shanghai.”

“Puxi is the more mature retail market in Shanghai, in terms of the number of established submarkets and malls,” Ball said. “Parts of Pudong, such as Lujiazui and the Century Avenue corridor, are now destinations in their own right. The dense office population in this area supports the many retailers and restaurants during the week, whilst the transport network makes it an easy destination for people from across Shanghai to visit in the evening and at the weekend.”

Each floor of the new Galeries Lafayette store features a dedicated multibrand area offering a selection of French, local and international brands. French designers Jacquemus, Lemaire, Paco Rabanne and Isabel Marant will have their full collections displayed for the first time in Shanghai. Meanwhile, Chinese design talent, such as Angel Chen and Yang Li, are also being promoted in store, localizing the offering. In the second half of the year, the Shanghai store plans to work with Shanghai Fashion Week and incubate small, local designers at in-store shops-in-shop. 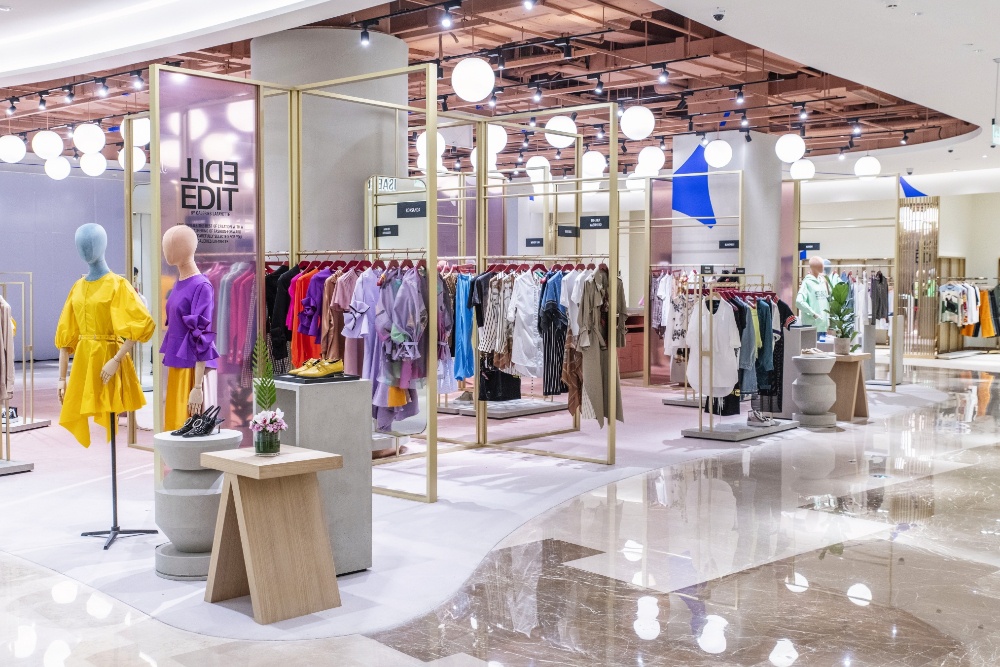 The selection of brands is targeted toward Millennial tastes.  Courtesy

Angel Chen said the Galeries Lafayette team has been instrumental in helping her to further her brand.

“My personal relationship with the buyers is quite close,” Chen said. “Not only do we talk about the sales and the buying, but they also like to know about our brand’s development and also share their development as well. This includes which showroom we are joining, which kind of press agency we have, and which city we want to focus on. I think it is more like strategy advice.”

Although the Chinese government has been moving to repatriate Chinese nationals’ luxury purchases, with adjustments on import duties and stricter controls over the gray markets put in place at the start of the year, Houzé said the company has not felt any impact from these new policies yet.

“They are still coming to France and, Chinese customers are really important in the total turnover, but we can adapt,” he said. “We have a price range quite wide, going from affordable to luxury, and they are not only buying luxury products, they are buying all kinds of products. They are not coming only for the price difference — that is an important part of it — but it is also the way of buying product where they are made: in France. That is part of the success of Galeries Lafayette.”

Bruno Lannes, partner at Bain & Co. and author of the management consultancy’s annual China luxury report said, while there may be an adjustment period in the near term, the repatriation works in the brands’ favor.

“It is playing to the strategy of the brands as they are very happy to see that all the investment they have made in China, in terms of stores, in terms of teams, in terms of marketing investment, itself is paying off,” he said.

Lannes said this policy move may prompt more international retailers to open up or expand in China, as Galeries Lafayette plans to do. “If the trend is for domestic consumers to buy locally, as opposed to being a tourist, [opening stores in China] is a way for brands to rebalance the loss of sales from overseas Chinese with sales from local nationals, and I think that’s a trend that we are going to see everywhere,” he said.

Ultimately, Lannes believes that the major impact of the policy shift will be very positive for China, and for businesses in the country, as it will increase the pool of consumers. 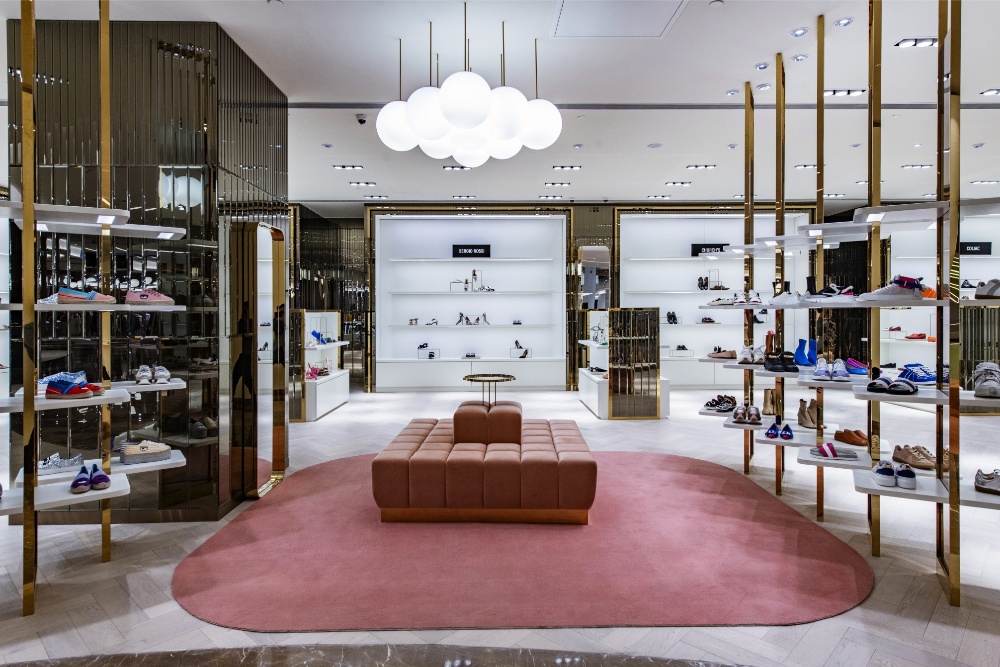 Galeries Lafayette is also making digital moves in China as the company is on track to release a WeChat mini program in the second half of next year.

“In order to be an important retailer in China, you need to have both off-line and online. We truly believe that one of the key digital open doors for us, in order to match our omnichannel strategy, is WeChat,” Pedone said.

The WeChat mini program will help to increase customer engagement and the recruitment of new customers, he believes, and is a more effective way for the retailer to communicate with its customers directly, compared to the big marketplaces Alibaba and JD.com. Pedone noted that the messaging app also offers Galeries Lafayette greater reach, with more than 1 billion registered users.

Related: CEO Talks: Galeries Lafayette Boss on Why Department Stores Are Not Dead >>