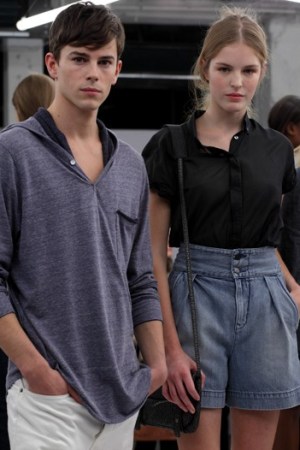 This story first appeared in the November 19, 2010 issue of WWD. Subscribe Today.

And Glenn Murphy, chairman and chief executive officer of the firm, doesn’t expect promotional activity for holiday to “be any better than it was in the third quarter.”

For the three months ended Oct. 30, net income fell to $303 million compared with income of $307 million in the year-ago period. Earnings, at 48 cents a diluted share, matched analysts’ expectations and, because of a decrease in the number of shares outstanding, were above the 44 cents registered during the year-ago quarter.

Net sales improved 1.8 percent to $3.65 billion, from $3.59 billion in 2009. Comparable-store sales were flat, driven by a 3 percent gain at Gap’s international chain, as well as respective increases of 1 percent at Gap North America and Banana Republic. Comps slid 2 percent at Old Navy, however.

The promotional climate of the period drove gross margin down to 41.2 percent of sales, compared with year-ago margins of 42.5 percent.

On the company call, Murphy touted Gap’s international expansion across China and Europe, and said that along with these efforts, the firm would continue to manage its core business in North America by improving marketing, as well as its merchandise mix and speed-to-market initiatives.

“I don’t think the product is exactly where we want it to be when it comes to that balance. But for the first time in nine months, we’re in a much better position than we’ve been in terms of striking that balance, particularly when it comes to fashion versus basics,” he said.

Although there have been few dramatic upside surprises so far this earnings seasons, retailers have generally met or just exceeded Wall Street’s expectations. That’s helped keep retail stocks on a fairly even keel. On Thursday, the S&P Retail Index rose 0.9 percent, or 4.20 points, to 478.49 as the Dow Jones Industrial Average jumped 1.6 percent, or 173.35 points, to 11,181.23. Overseas, the CAC 40 jumped 2.8 percent in Paris as the DAX rose 2 percent in Frankfurt and the Hang Seng Index increased 1.8 percent in Hong Kong.

In addition to the flood of retail numbers, investors digested the return of General Motors to the market and generally grew more comfortable with the state of Ireland’s banking crisis.

A reduction in markdowns and improving gross margins couldn’t save American Eagle Outfitters Inc. from reporting a 44.2 percent decline in third-quarter profits.

Net income totaled $33 million, or 17 cents a diluted share, compared with income of $59.2 million, or 28 cents a share, a year earlier. Excluding a loss related to the sale of investment securities, adjusted EPS of 29 cents matched Wall Street’s expectations. Sales increased 2.1 percent to $751.5 million from $736 million and rose 1 percent on a same-store basis.

Fewer markdowns helped gross margin improve to 41.6 percent of sales versus 41.3 percent. They also contributed to a 2.8 percent uptick in the stock Thursday, to $16.29.

“Turns are faster, we’re flowing goods into the stores more frequently and, with improved capabilities in production and design, we’re also leaving more open-to-buy, enabling us to chase strong categories. In fact, we did this for holiday,” ceo James O’Donnell said on the quarterly conference call.

Joining the ranks of stores opting for quarterly, rather than monthly, transparency, the retailer said it would stop reporting monthly comps next year.

Analysts were looking for EPS of 69 cents on sales of $238 million, according to Yahoo Finance.

The company added that, while it sees strength in the denim business, it is holding less inventory than at the same time last year.

“While Kmart improved profitability, our third-quarter results were disappointing, in large part due to lower sales of apparel and appliances at Sears,” said W. Bruce Johnson, Sears’ interim ceo and president. “Our seasonal apparel sales were down, with the unusually warm weather being a contributing factor.”

At Ross Stores Inc., the second-largest U.S.-based off-pricer, earnings increased 15.5 percent, but the watchword for holiday was caution.

“While we have outperformed our projections year-to-date, there are a number of reasons why we believe it is appropriate to maintain a cautious outlook,” said Michael Balmuth, vice chairman and ceo. “These include the likelihood of a very competitive holiday season, our tough prior-year sales comparisons and this year’s difficult holiday calendar, where the timing of Christmas Day means we have one less Saturday of business in our largest volume month of the year.”

“We are well-positioned for the holiday season and expect to benefit in the fourth quarter from the arrival of more seasonable weather,” said Bud Bergren, president and ceo.

The company said fourth-quarter comps would rise 1 percent to 3 percent. The stock traded up 6.3 percent to $14.37.