George and Oscar Feldenkreis Talk the Future of Perry Ellis

The brand is celebrating 20 years of being public and new headquarters in New York. 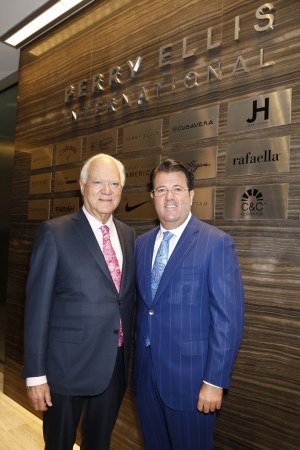 Leveraging Connections — and Knowledge — to Succeed

When George Feldenkreis fled Fidel Castro’s Communist regime in Cuba in 1961 with his one-year-old son, a pregnant wife and $700 in his pocket, he probably never dreamed that one day he would be ringing the closing bell at New York’s Nasdaq exchange.

But that’s what happened on Wednesday when the chairman and chief executive officer of Perry Ellis International Inc. visited the exchange to celebrate the company’s 20th year as a public company.

From those humble beginnings, the king of the guayaberas has created a business with just shy of $1 billion in sales, 30 owned and licensed brands, 69 retail stores and a foothold in established and emerging countries around the world.

Feldenkreis is not content to stop there. With his son Oscar, vice chairman, president and chief operating officer, at his side, he sees opportunity for continued growth in the future. Top categories for expansion include golfwear, women’s wear and direct-to-consumer initiatives.

Oscar Feldenkreis stressed that although PEI has “30 active brands,” 10 of them represent 80 percent of the company’s business. “So our focus is those brands,” he said.

In fiscal 2013, men’s sportswear and swim accounted for 73 percent of total revenues, women’s sportswear was 15 percent, direct-to-consumer — comprised of retail and e-commerce — accounted for 9 percent and licensing about 3 percent. The Perry Ellis label represents one-third of company sales and golfwear is also 30 percent.

Within its existing brands, the plan calls for expanding into additional product categories. For example, when it acquired the Ben Hogan brand, PEI inherited compression and woven tops, hats, belts, gloves and other apparel products that “can be replicated within our other golf brands,” according to the company’s 10-K. In addition, “we have expanded our product offerings to include new line extensions, such as Perry Ellis America, which provides a casual sportswear complement to the Perry Ellis Collection offering.”

Beyond that, the executives didn’t rule out more acquisitions.

“We would be interested in brands that would fit strategically into our portfolio,” Oscar Feldenkreis said. That would be sportswear or swimwear brands targeted to a more-mature department store shopper — Macy’s, Kohl’s and Dillard’s are PEI’s largest customers. “We wouldn’t be interested in juniors or young men’s, that not our focus. We’ve tried that before and it hasn’t performed well for us.” But activewear and additional golf brands are definitely on the radar.

His father noted that adding to the accessories roster would also be appealing. “We do some accessories in Perry Ellis, but there are big opportunities there too,” he said. In fiscal 2013, the U.S. represented 92 percent of total revenues..

Although the company has 86 international licensing agreements and 26 global offices and distribution centers, expanding outside the U.S. remains a priority.

“When we talk about Europe, 95 percent of our business is in the U.K.,” said George Feldenkreis. “And we haven’t even started selling golf, or Perry Ellis or Perry Ellis America in Europe yet. We also see opportunities in Asia.” He said the company currently has a joint venture in Shanghai for its Manhattan label and a store for Laundry in Beijing. “And Latin America is also a big area for us,” he said.

“Our long-term vision is to take Penguin more vertical and less wholesale,” Oscar Feldenkreis said. “We think there’s an opportunity for a 150- to 200-door chain in the U.S. and Europe.”

The Feldenkreises envision adding Perry Ellis “showcase” stores in some better malls around the country. New York or Miami, where the company has large operations, would be ideal locations so “we can control and manage it,” Oscar Feldenkreis said. He hopes to open one of these prototype stores within 18 months or less, he added.

Expanding internationally through licensed stores throughout Asia, Canada and Latin America is also in the plans.

On the e-commerce front, the plan is to “improve the online capabilities and functions of the Perry Ellis, Original Penguin, C&C California, Rafaella and Cubavera e-commerce sites to improve the shopping experience and attract additional business both domestically and abroad,” according to the 10-K.

“And we don’t do e-commerce in golf, so that’s a huge opportunity,” Oscar Feldenkreis said. A site for the golf business is expected to be live by the end of the year, he noted. A Laundry site is also on the agenda for 2013.

Women’s wear in general has been a learning curve for the company. “When we bought Rafaella, it was a fabulous honeymoon for the first six months,” he said. “Then it became a challenge. We realized you can’t adapt a men’s business to women’s wear.” The plan going forward is to expand the brand from related separates into a broader collection that can open more wholesale distribution and potential licensing revenue.

Under the Laundry umbrella, the Laundry by Design label allows the company to “pursue a better price point with the customer shopping in different channels of distribution from the current Laundry by Shelli Segal contemporary market.” The executives also hope to expand into Perry Ellis women’s wear as well as women’s golf in the future.

In addition to visiting the Nasdaq, the Feldenkreises marked the opening of their new New York headquarters in the Hippodrome building at 1120 Avenue of the Americas this week. The company brought its offices and showrooms together in just less than 100,000 square feet in the building and invited customers and friends to celebrate Tuesday night. Among those at the event were actress Brooke Shields and French actor Gilles Marini, the face of the Axist brand.