Two of Germany’s largest online retailers are undertaking a pilot project for sustainable packaging and it could change the way the world delivers clothing.

As of this month, Otto Group, one of the largest e-commerce companies in the world, and Tchibo, one of Germany’s biggest online retailers, are onboard with a government-funded project called PraxPack. One of the country’s largest online marketplaces for environmentally friendly and fair-trade goods, Avocadostore.de, is also taking part.

The project, launched in early June, will see the major multinationals try out different kinds of reusable packaging, explained Till Zimmermann, of the Hamburg-based Institute for Environmental Strategies, who is coordinating the 32-monthlong test. Also taking part is the country’s national postal service Deutsche Post and its DHL delivery service, and Otto Group is also investigating options to include it’s own courier subsidiary, Hermes, in the project. The scheme is supported financially by the Federal Ministry of Education and Research.

But what may well be most important about the project is its size. In order to make reusable packaging a “realistic alternative,” it needs scale and networking, Zimmermann explained, so that reusable bags are not just being used in conscientious consumer niches but instead become an accepted part of a much larger closed-loop system, nationwide.

The PraxPack tests will include the RePack system, developed in Finland. Since launching in 2011, RePack has grown so now about 75 percent of the users of the system return the reusable bags. They do this by folding their large yellow delivery bag to the size of an envelope, and returning it to the sender by simply throwing it into the nearest postbox.

But the German tests could also eventually move beyond that, with innovative new packaging developed especially for the project, such as collapsible boxes or reusable cartons. “When the item is bigger than clothing or a small pair of shoes, or if it is fragile, it won’t fit in one of the bigger RePack bags or might require additional protection,” Zimmermann told WWD. “So we also have packaging developers working with us. Everyone is already talking about new developments like that.” 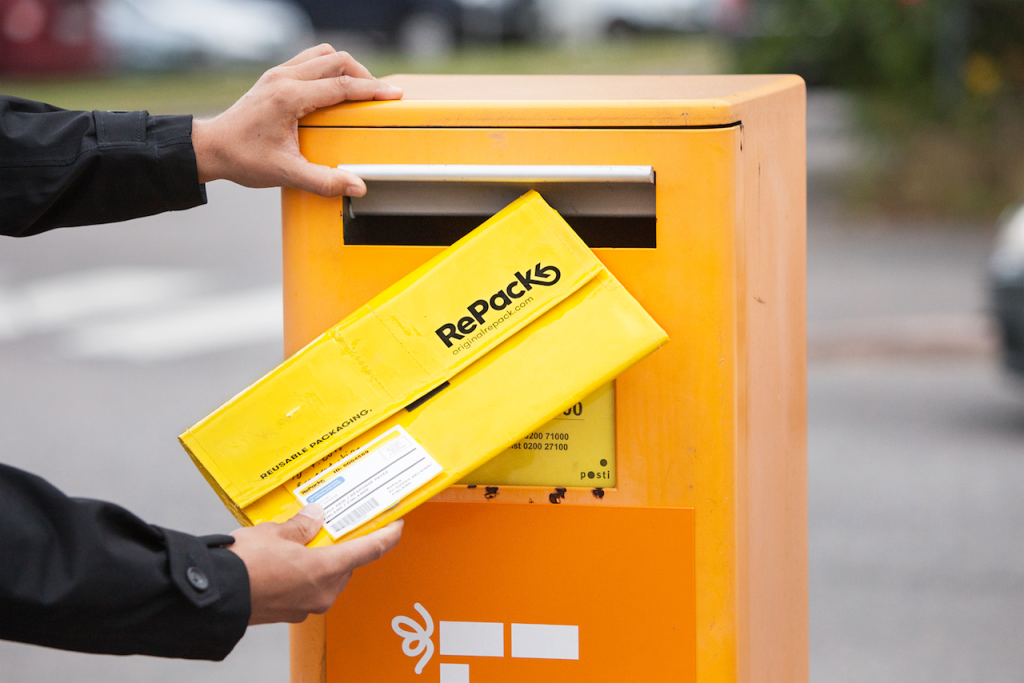 “Otto Group is involved in this cooperative venture in order to find solutions for the waste caused by single-use plastics and to prove the practicality of reusable packaging in the real world,” a spokesman from the company, which has around 14 billion euros in annual sales, said. Otto Group will be looking at various options as part of this, including whether it sets up its own reusable packaging systems or whether it works with a third party like RePack in the long term.

“At the moment, the company is looking into which branches will take part, whether it will involve delivery bags or boxes or both, and last but not least, which solutions are actually feasible in terms of the environment and also acceptable to customers,” the spokesman explained.

At Tchibo, a 3.2 billion euro company that sells lifestyle goods and clothing in addition to its core product coffee, the PraxPack project is also seen as a test. “Are the reusable packages stable? Will they run through the automatic delivery systems without problems? Will customers find them easy to handle? All of this will need to be tested,” Sandra Coy, Tchibo’s spokeswoman for sustainability and quality, told WWD.

For this initial test, costs won’t be passed onto customers, Coy added, and yes, the company is planning to teach its customers how to deal with the reusable bags, she said.

There is no doubt that local consumers want recyclable packaging. A recent survey by the German Packaging Institute found that 70 percent of the country’s consumers had decided against buying something because they thought the packaging was not environmentally friendly enough. Just over 50 percent said they’d abstained from a purchase at least once for this reason, and around another 19 percent of consumers said they regularly based decisions on this.

“But cost remains a major challenge,” project coordinator Zimmermann conceded. The price of making reusable packaging is much higher than the cost of producing a single-use plastic bag, he points out. So quite logically, reusable packaging only makes financial sense if it is reused. The more often it circulates, the more price effective it is. But how to ensure that something like a RePack bag, which has an estimated lifetime of 20 uses, actually stays around that long, Zimmermann wondered.

Customers need to be educated about that. Up until now, the RePack system has remained relatively niche, which may be why environmentally conscious users are so willing to return the bags. “But we need to broaden that customer base,” Zimmermann noted, “and we have to figure out how to organize this system so it’s inexpensive enough to be useful.”

There are some low hanging fruit in e-commerce, he added. “For example, the person who orders three pairs of pants to try them on and then sends two pairs back. That’s where reusable packaging makes a lot of sense.”

But there are still some problems with the apparel industry’s enthusiastic approach to sustainable packaging, said Sophie Kieselbach of Thinkstep, an international consultancy for business sustainability headquartered in Stuttgart; Kieselbach is a specialist in packaging. “Packaging is an easy place to start, and it’s also what consumers see first,” she argued.

For a brand, deciding to use sustainable packaging can be quite an emotional decision, as well as a marketing one. But companies need to fully explore all alternatives, carefully examine internal structures and research viability and sustainability first. “Just in case they’re accidentally making things worse, while trying to make them better,” Kieselbach said.

In fact, the impact of packaging apparel is not actually that big when compared to what it takes to produce the garments. Kieselbach ‘s colleague, Flora D’Souza, also a packaging specialist at Thinkstep, noted that when cotton clothing weighing 300 grams is wrapped in packaging weighing 200 grams, the packaging may only account for between 5 and 10 percent of that item’s total carbon footprint. D’Souza and Kieselbach argue that the main problems with apparel industry packaging actually have more to do with the rate at which garments are being produced by fast fashion manufacturers. After all, the larger the quantities produced, the more packaging required. In other words, they suggested, the fashion business — especially at the inexpensive end of the market — has bigger environmental issues to worry about than packaging, and a more holistic approach is needed to achieve sustainability.