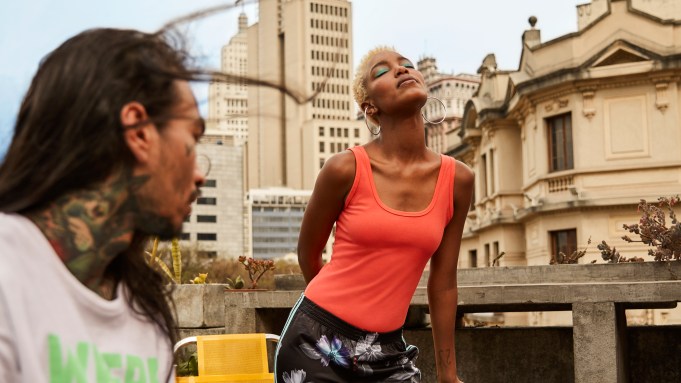 There is no doubt that e-commerce umbrella Global Fashion Group is one of the winners of the COVID-19 pandemic. After years in the red, the company is now finally making money: The value of merchandise sold through its e-commerce platforms has shot up 25 percent and will likely reach 1.9 billion euros this year. GFG boasts more than 13 million active customers and, after an initially weak IPO in mid-2019, share prices tripled in 2020.

However, as co-CEO of the company, Christoph Barchewitz, told WWD, he doesn’t like to think of that way. “It was a normal evolution,” he insisted. “We just happened to be maturing as a public company in 2020.”

That maturation has taken almost a decade. GFG was founded as the result of a merger of several different fashion retailing websites, all dating back to 2011 and 2012, and all selling clothes into emerging markets. Two of these — Namshi in the Middle East and Jabong in India — were sold in 2016 and 2017, respectively. Today, GFG consists of Dafiti in Latin America, Zalora in Southeast Asia, The Iconic in Australia and Lamoda in Russia and nearby Ukraine, Belarus and Kazakhstan.

GFG acts as an umbrella for the four sites, each of which has a similar user interface. The company is registered in Luxembourg, and Barchewitz is based in London. But there are no directives coming from a central headquarters: The business model is all about localization.

As Barchewitz pointed out, almost all of GFG’s 13,000 employees work in the markets that they service, across 19 countries, and local staff make decisions about what’s best for their market, including which items they’ll select from any given collection.

The original model for the fashion platform was Germany’s Zalando and the main shareholders in GFG are Rocket Internet in Germany and Sweden’s Kinnevik, which also backed Zalando. The latter, which racked up revenues of 5.41 billion euros in the first three quarters of 2020, is currently speeding towards becoming the Amazon of fashion in Europe, transforming itself into a huge platform for both brands and shuttered brick-and-mortar stores.

While smaller — GFG expects 1.3 billion euros in revenue for all of 2020 — the company aspires to do the same thing in less developed markets.

GFG sites act as retail platforms for around 10,000 brands, ranging from Adidas to Zac Posen, as well as locally sourced products. The company boasts that GFG sites are the dominant platforms in the regions they work in when it comes to fashion pure-play e-commerce.

Just one example: At the end of 2020, GFG’s Zalora became the first e-commerce platform in the region to start selling products by H&M, thanks to a special two-month-long partnership.

Customizing the approach to each market is absolutely crucial, Barchewitz said. “We believe retail is a local experience. It’s about culture and the holiday calendar and festivals, all those things that are different from country to country,” he told WWD. “That’s really critical. I also think sometimes that gets lost in e-commerce, because there’s this great flattening going on — a kind of global ‘same-same’ — where everybody can connect to any product in the world.”

With this in mind, GFG has also started selling insights to partner brands based on data it’s been collecting from shoppers: In December 2020, the company launched a Southeast Asian trend report based on information gathered by the Zalora platform. There, the vast majority — about 90 percent — of Zalora purchases are now made via a dedicated mobile phone app. This market has skipped desktop websites altogether and gone straight to mobile, GFG said, adding that over a thousand brands had already subscribed to the Asian report. The report “creates additional ‘reasons to work with GFG’ especially in regions where brands don’t know customers well,” the company said.

Serving developing markets is not always that easy though, and it’s certainly been expensive, something that is likely reflected in the fact that it’s taken GFG so long to turn its first profit.

For example, in some markets, GFG has had to set up its own services: How customers can pay when they don’t have credit cards, how goods are delivered, nonstandard sizing on locally produced clothing and even whether the Internet and other related technology is up to the task. All of these are questions online retailers in Europe or North America don’t usually need to spend a lot of time worrying about.

“We have spent the last 10 years building very localized solutions, ones that are different in every end market,” Barchewitz said.

In a November 2020 company presentation, GFG tallied up some of those: 10 fulfillment centers, over 35 different payment methods — including setting up digital wallets and accepting cash on delivery — customer service support in 11 different languages and making 20 percent of deliveries with its own dedicated fleets. The company has also done things like set up drop-off points and in Latin America, established its own fleet of bike couriers.

Barchewitz’s favorite innovation to date is GFG’s Russian concierge service. There, Lamoda customers fill a shopping bag with items they’d like, then make a 15-minute appointment with one of the website’s couriers, who double as stylists and salespeople. The courier comes by with the goods, the customer tries everything on, pays for what they do want and gives back what they don’t.

“And there are two reasons we did this [in Russia],” Barchewitz explains. “When we started, trust in e-commerce was very low. People wanted to see and feel the product before paying. Secondly, there was no third-party provider who could deliver a really nice customer experience. After all, you want somebody showing up at your door who has a certain look and behavior,” he explains. “The couriers are in direct contact with the customer. In many cases, they’re even asked for their opinion.”

Anything that succeeds in one market can potentially be transferred to another, Barchewitz said, and this is one of the advantages of GFG’s umbrella structure.

“We share learnings across markets,” he boasted, “and we can leverage brand relationships. Western brands wanting to reach these markets have just one contact [at GFG] to reach all of these different countries.”

The websites also share technology as GFG develops it, something Barchewitz describes as particularly cost-effective. For example, in 2019, GFG’s Australasia-focused website, The Iconic, launched a filter that allowed customers to shop according to their values, whether they’re worried about animal rights, labor rights or environmental protection.

Some of GFG’s markets may not want all of that yet, Barchewitz conceded, but the Southeast Asian and Russian websites followed suit in 2020 adding their own filters, named Earth Edit and Lamoda Planet, with the Australian team there to advise colleagues on the other side of the world if needed.

Barchewitz preferred to play down the fact that all of these innovations cost a lot of money. Market analysts have previously described the project as high-risk with potentially huge rewards and Barchewitz believes that GFG has now passed through the most capital-intensive phase of building up a fashion platform.

GFG’s websites serve a growing middle class, he said: The customer who wants a good shirt for a job interview or some new yoga pants. Of course, he added, there are still many people in those developing markets who don’t make enough money to spend 47 euros — that’s the size of the average purchase through GFG’s sites. But that fact is outweighed by the sheer numbers in these markets. “Last year [2019] these markets saw 320 billion euros worth of spending in this area,” he argued. “That’s not that far away from Europe or America.” In 2018, household expenditure on textile and clothing in the European Union added up to 519 billion euros.

GFG has also said that fashion e-commerce only accounts for about 6 percent of total sales in its markets, compared to 15 percent in Europe and 20 percent in the US.

“What is so exciting about our markets is that there are a billion potential consumers,” Barchewitz concluded. “We only serve 15 million of them — that’s about 1.5 percent. They are a very early stage opportunity in e-commerce adoption — and these markets are big.”