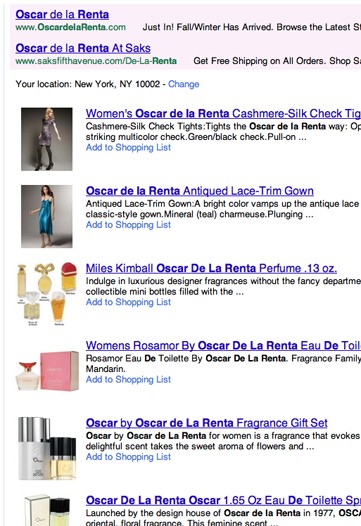 Google is venturing into fashion with a new Web site and virtual designer boutiques, set to launch Wednesday.

The fashion world is abuzz with talk about the venture, according to sources who have been briefed on the search giant’s plans.

Anyone will be able to create and share their own personalized shop by selecting style preferences and the looks, brands and items they love — in the end making it easier and more stylish to buy fashion on the Web.

The search company has tapped Sarah Jessica Parker to set up her own personalized shop and is reportedly wooing Katie Holmes to do the same.

Oscar de la Renta, Tory Burch, Cynthia Rowley, Marchesa, Isaac Mizrahi, Tracy Reese and Erin Fetherston are some of the big names Google has invited to set up their own virtual stores on the site, although shoppers will most likely also be able to draw on a huge variety of fashion brands for sale online to stock their virtual shops.

Visitors will not actually complete a purchase on Google, but will click through to a brand’s online store or a retailer who carries the item, such as Saks Fifth Avenue, Barneys New York, Net-a-porter or Yoox.

Google executives declined all comment on the site, which is being unveiled Wednesday and celebrated with a party in New York that night at Skylight SoHo.

The new site, dubbed — for now — Boutiques.com, is part of a bigger trend toward new retail formats that the Internet and social media have made possible. At its most basic level, the new fashion site will function much like Google Search or Google Shopping under the covers, but the part visitors will see will look like high-end, personalized luxury boutiques — an environment and approach to search and shopping that is more appropriate, efficient and appealing to fashion lovers and designer brands than Google’s existing options.

On top of that, the site will also incorporate elements of entertainment, gaming and social media, and a way for participating brands to tap into that to drive even more traffic to their sites.

Fashion community Polyvore and fashion search engine ShopStyle offer similar functionality and a stylish look, although they do not use the boutique metaphor. They are two of the biggest nonretail fashion sites on the Web, with about 1.6 million unique visitors a month each, according to Google Analytics. Both sites let users assemble looks from around the Web, share them and click through to other sites to buy.

Also new are fashion games on Facebook and MySpace, such as Zynga’s “Fashion Wars” and Sugar’s “Retail Therapy” game, that let users stock a virtual boutique with virtual clothes, then click through and buy the real things in an online store.

With Google’s huge amounts of traffic, its new fashion site could potentially be even more powerful than similar existing ones.

It was not clear at press time how Google intends to structure its fees. Potentially, it could charge click-through fees or a small cut of actual sales to its brand and retail partners with boutiques or who supply Google with a data feed of their products. Which partner stores users see could depend on their style preferences, clicks or searches, not unlike the ads users see today when they do a search, although in a very different form.

Google or its partners could also offer users who create shops on the site incentives such as points, rewards or a small affiliate fee if someone purchases an item in their Web store, as do other fashion communities such as Chictopia, bookmarking sites and distributed retailers such as JeffSilverman.com.

Boutiques.com will allow Google to better tap into one of the biggest-selling and fastest-growing categories on the Web — apparel, accessories and footwear — and hedge against the growing threat to search that social media and distributed retailing pose. Next to simply typing in a URL, search is the biggest driver of traffic to retailers’ sites, closely followed by e-mail marketing, but social networking sites such as Facebook, Twitter and Polyvore are rapidly gaining ground.

By appearing on the site, brands and retailers have the potential to drive greater amounts of traffic to their sites, which hopefully they can then convert into buyers. In addition, it gives them a way to layer gaming, entertainment and social shopping on top of their Web stores, even if their own e-commerce platforms do not support them.

Google is not currently an e-tailer, but it does offer a shopping cart widget similar to PayPal called Google Checkout. Potentially, it could offer mobile and local shopping tie-ins to its Android phones and apps, connections to video bloggers and other shopping-related video on YouTube, and use visual search technology from recent acquisition Like.com.

EBay has recently moved to take better advantage of the popularity of fashion on the Internet by creating a separate destination on its site for fashion, complete with special shops for brands and exclusive collections from Narcisco Rodriguez, Norma Kamali and Derek Lam.

Sears and Wal-Mart have third-party marketplaces — not unlike Google’s new shops — in which other brands and retailers can display their wares on Sears and Wal-Mart, even though the transaction is completed at another e-tailer’s site. Amazon and eBay also run marketplaces, but checkout happens on their sites. However, except for eBay, they have not been designed specifically to display fashion.

Asked why Google’s project is more compelling than eBay’s forays into fashion, the executive of a fashion house said, “It’s Google. Isn’t that a lot sexier than eBay? It’s true that eBay has been exploring this area and tried some different vehicles through exclusive relationships. Google owns the world — it owns YouTube, Gmail, and it’s a different platform than eBay.

“We have very successful online relationships with full-price and off-price retailers and sites such as ShopStyle.com. It’s an exciting area,” he continued. “Really exciting things are happening on a daily basis. In the long term, consumers are going to be shopping in a different way. Where is that all going to fall out in 10 years? It’s incumbent upon us to be open to and explore new areas. In the business sense, the brick-and-mortar business is not growing by leaps and bounds. It’s become more of a market share question.”