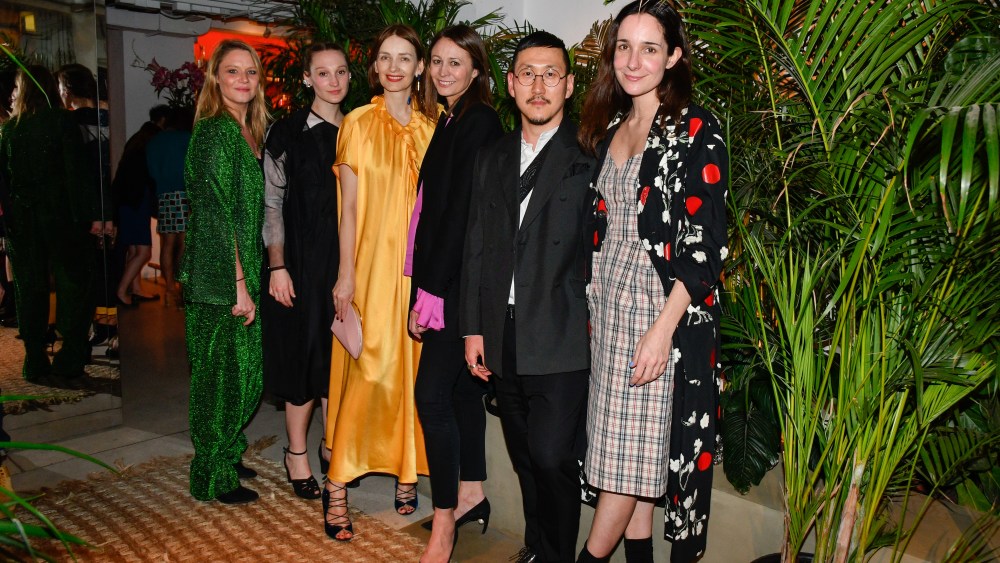 HONG KONG–The GREAT Festival of Innovation, a conference of ideas promoting British trade internationally, touched down in Hong Kong last week bringing a cross-section of some of the UK’s biggest bold-faced names.

Running from Mar. 21 to 24. at the Asia Society, with other events held in tandem, speakers tackled everything from the future of luxury and consumer goods to the rise of co-working spaces and sustainable farming techniques.

For fashion folk, the celebration of all things British kicked off with a dinner at Sevva on Thursday in honor of Roksanda Illincic, who created a capsule collection exclusively for the department store Lane Crawford, and was hosted by the British Fashion Council (BFC).

It set the tone for day three of the conference which was devoted to fashion and design, and hosted discussions from Illincic, Susanna Lau, founder of Style Bubble, the designer Rob Jones of Teatum Jones, perfumer Roja Dove, London Craft Week founder Guy Salter, as well as Chinese leaders like Winston Cheng, the international president of JD.com, and Yuan Yafei, the ceo of department store operator Sanpower Group.

Wrapping up the week, the British Fashion Council threw a party on Friday at the Music Room at Potato Head, with design talent Edeline Lee, Eudon Choi, Georgia Hardinge, Sharon Wauchob, and Phoebe English in attendance.

Below, selected insights from the conference:

-“There have been plenty of western-based groups who have made similar claims [to become the next LVMH] and it hasn’t happened. I think that inevitably we’re going to see some of this stuff doesn’t happen… You could argue that the ones that already exist have hoovered up the available brands that make it possible to do such a thing and even they, not all of them are as successful as one might think. I think that’s certainly worth being cautious about.”

-“I do worry to what degree some of it is fueled by trophy assets and just wanting to buy one way’s into the club. There is absolutely no doubt it doesn’t have to be that expensive to buy into a young fashion brand. If you look outside fashion for example, and also to be real frank, if you stick to the rules of this game, you need to do your diligence as well. It’s sort of snapping things up. The other thing that has worried me for years is buying something and then accidentally killing it off, because you don’t understand that these brands are sort of fragile, sort of mystical creatures.”

-“If you’re going to build a conglomerate, you need a few anchor brands and frankly most of the [blue-chip ones] are already taken. The ones that are doing well are not for sale and should Chanel suddenly become available, Bernard Arnault is going to be there in a nanosecond.”

Roja Dove, perfumer, on the role that intuition plays and whether there is a risk of being “over led” by data:

-“Data can be useful say for creative people say if we were wanting to open in a particular market base, of course, you can start to learn about trend and taste. However you then have to put on your creative spin on that, otherwise all you’ll do is what already exists–and that’s a bit line of Henry Ford and the motorcar. If he listened to his customers, he would just make a faster horse. As a creative person, hopefully, what you’re doing is always pushing the boundary a little bit. Data can help make sure you don’t make a mistake, a cultural mistake in particular, but you have to put the creative spin on it, make something worthwhile and different. Otherwise, it’s a horse.”

-“For much more mainstream things, potentially you are wanting to appeal to an extraordinarily wide market. I know many brands in my industry, they test market everything to death. Who has time to be on a test market? You immediately have to think about who is doing the testing. That’s why so much stuff smells really just all the same.”

Grace Chen, couturier, on the potential of virtual reality and 3D rendering:

-“If you can do it right, I think it will be a natural change. We are doing it now. We make a mannequin, like you being in my studio all the time, because you cannot [necessarily find the time to] fit five times….I already have you in my studio. That saves you a lot of time. We have one fitting when you pick up your dress but at that time, your dress is already finished, then we can do minor alterations.”

-“A few of my clients are Chanel, Armani, Dior couture customers, they told me they have to spend at least a half year to make one jacket and sometimes they have to fly to Paris or Milan to do the fitting.”

Tristan Hunt, director of the V&A Museum and former politician, on how to prepare for the artificial intelligence revolution:

“If you want to immunize your child against the rise of the robot, teach them design. If you’re worried about your child’s employment prospects, teach them art. These creative skills could be the greatest barrier to a robot stealing your job in 10 years’ time.”