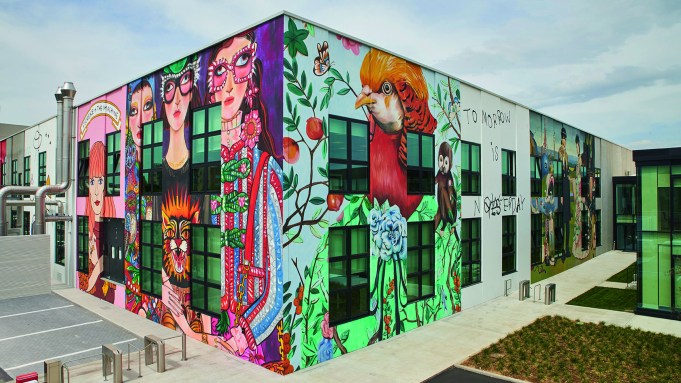 Gucci is the latest luxury brand to christen a new manufacturing plant with the ribbon cutting of its ArtLab in Scandicci, near Florence. But this was no perfunctory or formal affair, with clapping, chanting — and some tears of joy. It couldn’t have been otherwise.

“This is the biggest industrial investment in the history of Gucci,” said Marco Bizzarri, president and chief executive officer of the Kering-owned brand. To wit, the ceremony drew François-Henri Pinault, chairman and ceo of the French group.

The Gucci factory joins others opened by Hermès International over the last few years and Louis Vuitton revealing plans to open a new workshop in Beaulieu-sur-Layon in early 2019, following one expected to open in July and another in 2020.

“Three months after I joined Gucci in January 2015, the idea was to slash 40 percent of suppliers,” Bizzarri said. “Today, we are officially opening a site that has no rivals in the world, nobody else has built an industrial plant for shoes and leather goods together.”

The two categories combined account for 70 percent of Gucci’s sales, or around four billion euros, said the executive, who declined to provide the amount of the investment in ArtLab, which is based near Gucci’s Casellina headquarters outside Florence.

“This is an important day also for the group, it’s an exemplary project for Kering,” Pinault said. “It embraces our strategy and values as a group. It embodies our vision of modern luxury, creativity, craftsmanship and innovation.”

ArtLab will allow to support Gucci’s “phenomenal growth, reducing lead time and raising the quality and exclusivity of the brand. In luxury these are two challenges when there is such phenomenal growth,” Pinault continued. “One of our key values is the way we do business, which matters as much as the objective. It is very important to reinforce our leadership in a sustainable way as we strengthen the link with the territory.”

In fact, Pinault also emphasized the importance of Tuscany and Italy for Kering, noting that Italians themselves are often not aware of the significance of their country’s pipeline and quality craftsmanship. “ArtLab would not have been feasible in France. This capability is why we are here. We are very proud of these roots and we will continue to invest in these roots.”

Pinault waved away the notions of bureaucracy and red tape, which are often said to slow down investments in Italy, saying that ArtLab was set up in “a very short time.”

“It’s a dream come true,” he said, expressing “gratitude and admiration for the passion, courage and enthusiasm” of Gucci’s employees and artisans.

Bizzarri was equally enthusiastic, saying that ArtLab will allow the group to double Gucci’s production and praised the company’s ability to react to such a “fast change in aesthetic and orders,” referring to the arrival three years ago of creative director Alessandro Michele, who succeeded Frida Giannini and quickly overturned the brand’s image and style with his whimsical and imaginative designs.

Michele’s influence was clearly visible at ArtLab. The designer’s staple vintage sofas, colorful armchairs and rich carpets created convivial areas for employees, and Pinault and Bizzarri spoke in a room decorated with a romantic pattern of flowers, plants, birds and butterflies. Murals by some of Michele’s favorite artists — including Coco Capitàn, Ignasi Monreal, Angelica Hicks, Gucci Ghost, Jayde Fish, Unskilled Worker and Phannapast Taychamaythakool — decorated the facades of the building.

To wit, Massimo Rigucci, in charge of Gucci’s leather goods and shoes, said ArtLab hinges on people, and is not only about space. “It stimulates the creativity that is in each one of us, which is able to express itself as part of the ongoing research to create more beautiful products. Artisans realize dreams and beauty, not only products,” Rigucci said. “Expertise and experimentation are all elements that support our strategy and company culture.”

ArtLab integrates all the different phases of the pipeline, ranging from the making of prototypes for all leather goods and men’s and women’s shoes; research and development, or the testing of durability of materials, for example. “Bringing all these steps in-house is an added value,” said Bizzarri, who said that, when he arrived at Gucci, 5 to 7 percent of the production of leather goods was made in-house. “Now it’s 50 percent,” he noted.

ArtLab employs 800 people, of which 150 are newly hired. It covers 399,600 square feet over a restructured and expanded former hosiery production company. The executive said 2,000 people are employed in the Florence area, and almost 5,000 in Italy. Globally, the company counts around 13,000 employees.

Bizzarri acknowledged the questions hanging over the brand. “People are asking: How long can Gucci’s success last? Analysts ask me why are you pushing growth? I can’t tell a store to close at three in the afternoon, people want to buy,” said Bizzarri to a round of laughter. “There are a lot of people who pass judgment thinking like three years ago, but customers have changed since then. We shouldn’t ask when [things will change] but what will Alessandro bring to engage customers? Let’s enjoy the moment.”

Bizzarri praised the “amazing talents” within Gucci. “Everything is possible with them,” he said. The executive has long been working toward a nimble company and, speaking of a change in the organizational and management structure earlier this year, he said, “Status quo does not rhyme with Pinault,” to more laughter. And the jesting mood continued when, asked about the other group brands working with artisans in the area, he said: “I don’t know if I can talk about Kering, I’m not wearing that hat — yet. I’m letting it slip since [Pinault] is here,” he winked, in reference to the rumors that surface from time to time about his taking on a larger responsibility role at the parent group.

A tour of ArtLab offered some interesting insights into the brand, which, for example, is the only one that has an in-house laboratory that tests the durability of hides, which speeds up the process of production; artisans wear white lab coats that spell out “Maison de l’amour [house of love]” on the back; artisans were seen bending the bamboo handles of the storied house model with fire, or blotting with water swatches of crocodile hides, which were then nailed on wood planks to dry. The hides were then made shiny with a machine from the Forties activated by the foot of an artisan, who explained that, although there are more modern systems, this traditional treatment is the best and that it can take two and a half days just to prepare one piece of leather. Another artisan was identified as “Golden Hands,” for his ability to decorate shoes, so much so that he regularly works with Michele backstage ahead of the brand’s runway shows to complete the details and decorations of the styles, showing, for example, the snake motifs that run on the heels of some models — in sync with the company’s aim to have only 30 to 35 percent of the production steps be automated.

The company hinted at another manufacturing project in Scandicci, but did not provide additional details.