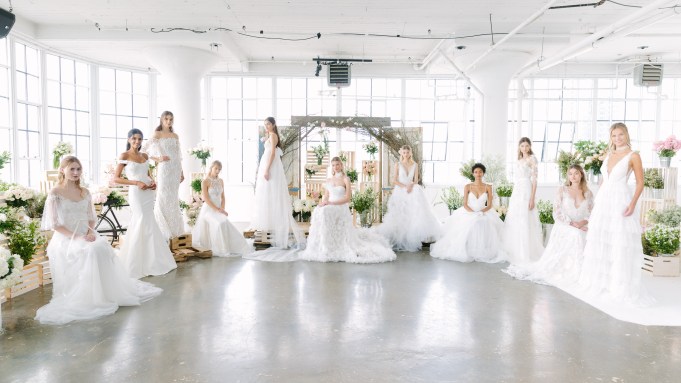 As far as being swept up in a branding controversy goes, the one Marchesa finds itself in the middle of is among the toughest — especially since it isn’t one of its own making.

After scores of women, including Hollywood A-listers like Angelina Jolie and Gwyneth Paltrow, accused Harvey Weinstein of sexual misconduct, his wife Georgina Chapman — cofounder of Marchesa with Keren Craig — is dealing with the aftermath. Chapman has said she is leaving Weinstein given the allegations, while she also is having to cope with the impact on her fashion brand of the near-nonstop media coverage of his actions. While Weinstein’s alleged predator behavior has fueled a national discussion about sexual harassment in the workplace, several leading retailers including Saks Fifth Avenue, The Knot and Neiman Marcus declined to comment about the controversy’s potential effect on the Marchesa brand.

In the 13 years since they launched their label, Chapman and Craig, who met as undergraduates at the Chelsea College of Art & Design, have been known to be big on opulence and artistic references like Chantilly lace tops with beading or strapless gold-embroidered tulle gowns. Marchesa has an established bridal business, which includes a second, more affordable label, Marchesa Notte. Several retailers, who requested anonymity, spoke strongly about the cofounders’ commitment to their brand.

Focused on caring for the couple’s two young children, Chapman has yet to return to work but she and her fellow staffers have received we-will-stand-by-you messages from retailers.

As for whether or not brides-to-be and other Marchesa shoppers will want to distance themselves from all things Weinstein remains to be seen. In addition, the label no longer has the built-in red-carpet roster of actresses, whom Weinstein helped line up.

A spokeswoman for Marchesa declined comment Friday, as did one for Weinstein, who is seeking treatment in an undisclosed rehabilitation center. He is not involved with the running of the business in any way.

Linda Fargo, senior vice president of fashion office and store presentation at Bergdorf Goodman, is unwavering about the brand. “Bergdorf Goodman and Marchesa have been longtime partners — we were the first store to pick up the brand when it launched in 2004. We have been avid supporters of Georgina and Keren’s work ever since and hope to continue supporting the brand in the future,” she said.

One major retailer, who requested anonymity, described Marchesa’s business as “really fantastic.” “Our customer really hasn’t connected the dots that he [Weinstein] and she [Chapman] are married,” the retailer said.

Unlike inside the fashion industry bubble, most shoppers aren’t keeping track of the ever-changing roster of designers at different companies, he said. Given that, his company does not expect the Weinstein controversy to impact Marchesa’s sales “at this point.”

Last week Berkshire Hathaway-owned Helzberg Diamonds held off on the scheduled launch of a collection of Marchesa engagement rings. And a spokeswoman said Friday the collection will not be launched at this time.

Having recently teamed with former Fox news anchor Gretchen Carlson to empower underserved women against sexual violence and harassment, Lauren Leader-Chivée, cofounder of the All in Together campaign, said it’s painful to think Chapman would pay personally and professionally for the transgressions of her husband.

“As a feminist, that is something that disturbs me. We saw this in the presidential election — a perpetual willingness to bring up Bill’s [Clinton’s] bad behavior in the context of judging Hillary,” she said. “On the other hand, it’s an incredibly complex line to walk and I suspect her business will suffer. People will inevitably ask the questions, just as they have in other instances of high-profile couples, ‘Did she know?’ ‘How could she not know?’ ‘Was she in some way an enabler?’ Even though that may not be fair, I think it’s inevitable that those questions will swirl.”

Martin Lindstrom, brand adviser and author of “Small Data: The Tiny Clues That Uncover Huge Trends,” was less convinced. “Harvey has spent a tremendous amount of time promoting her brand with actresses on the red carpet. That whole space is almost impossible to reactivate. My understanding of that brand is they don’t have an enormous budget to do marketing. They really have relied on word-of-mouth, and that word-of-mouth is gone.

“Even though there is distance now between her and her now former husband and the company, people will for a while say, ‘Hmm, what is this?’ Because Marchesa wasn’t established as a mainstream brand name, although the elite were aware of it, it hadn’t found its own feet to stand on. Therefore, it’s incredibly fragile at the moment.…I wouldn’t say the brand will fall apart, but there is a major crisis happening,” Lindstrom said. “They will have to reconsolidate a lot — reducing employees and distribution — to get it back on track within the next six months to a year. I think it will have a huge impact on the brand.”

Kim Vernon, president and chief executive officer of Vernon Co., a consultancy, said, “I think Marchesa did an extraordinary job dressing actresses for the red carpet. Considering the nature of Harvey’s behavior and actions, I would expect that most of those actresses would distant themselves from wearing those gowns at their awards and red-carpet events. I think that’s not good for the business because we all know that celebrities wearing and endorsing designer gowns and products is great for brand awareness and visibility. Alternately, if they [stores] have a good business with Marchesa, I see no reason why they would punish the brand for activities that are not related to the designers.”

“I think they can have a successful business without Hollywood. They do a real business with the Notte second line and a lot of licensed products,” she added.

Vernon believes that actresses will distance themselves from choosing these gowns for the next six months. “How long that lasts, I don’t know,” she said. “Those two women are real designers in their own right and have built a business. They are in the business of dressing women and making them look beautiful. Being attached to Hollywood never hurts. I do think Harvey was very helpful in continuously suggesting that.”

Joan Pillow, who owns signature bridal salons in Houston and Atlanta, said she really hopes the controversy will not affect Marchesa’s business. Noting that she hasn’t seen photographs of Chapman with Weinstein on the red carpet in some time, Pillow said, “I don’t think the average person makes the connection. She and Keren are their own brand. The average person looking at dresses just knows the [brand] name.”

With dresses retailing from $7,000 to $10,000, Pillow’s clientele isn’t paying much attention to the coverage. “I’m certainly not going to contribute to fueling that story. I didn’t mention it to my staff. No one’s mentioned it to me. So it’s not a topic of discussion. If anything, I feel very sorry for them.”

Dimitra’s Bridal Couture doesn’t expect the controversy to affect sales. A spokeswoman said, “I believe that most women stand by other women, and if anything, the actions of Harvey Weinstein hurt his wife and family just as much as it did his victims. Just as we the public will rally around the victims of Harvey Weinstein, I expect they will rally around Georgina Chapman and her children.”

Marissa Harrington, owner of the Marissa Collections in Naples, Fla., is confident that Marchesa will remain one of her store’s top-selling brands with Oscar de la Renta and Naeem Khan being the leading two. “Why punish the wife for something the husband did? Don’t make her the victim,” said Harrington, adding that many women may recognize Chapman as a fellow working woman and will lend their support by buying the label.

Naomi Steward, buyer at L’Elite Bridal in Boston, said it is probable that sales may be affected in the bridal industry but not in her own store. “Marchesa is really separate from Harvey [Weinstein]. I don’t expect much impact with our shoppers,” she said.

Comparing the conundrum to other fashion industry ones, another bridal retailer noted how Donald Trump wound up in the White House despite manufacturing ties in China and Kathie Lee Gifford survived her child labor issues. Mentioning how his store sold a Marchesa wedding gown earlier in the day, the retailer said, “If a girl loves a dress, I don’t think it’s going to stop them. Marchesa dresses are so uniquely different and with Notte you get so much value for the look. It would be silly for a girl to protest in that manner. Don’t go to his films — protest that way. But don’t destroy her hard work. This also involves Keren [Craig], her fantastically delicious, beautiful partner and hundreds of employees whose jobs could be jeopardized because of this in the Garment Center — in New York City alone. What Harvey Weinstein did, if he did it, is despicable and he should be punished, certainly. But I don’t think the wife’s company should be punished because it employs many people.”

Another bridal retailer said, “It’s going to be tough for some shoppers to not identify Marchesa with a scandal.”

Celebrity stylist and television host George Kotsiopoulos, who has worked for The New York Times Magazine and as a host on E! Fashion Police, said that customers outside of Hollywood or New York might not even be aware of Marchesa’s connection to the Weinstein scandal.

“For Marchesa, I don’t think anyone outside of entertainment or fashion would even put two and two together. If a woman wants a pretty dress and she sees it hanging on the rack, she is going to buy it. It shouldn’t affect the brand and if it did, that would be a shame. What does it have to do with [Georgina]? Harvey doesn’t own the company. Why punish her and Keren [Craig]?”

He did acknowledge that Weinstein “was closely tied with the brand in the beginning and was very aggressive about wanting people to wear it. But they didn’t wear it just because Georgina was Harvey’s wife. They had to have the goods as well and they did.”

As far as whether he or any stylists will be putting it on actresses for the red carpet, he thinks that “right now people will shy away for a little bit. But ultimately, if it’s a pretty dress and if you don’t have anything else, you are going to wear it,” he said.