Do You Have to Have It All?

Retailers have finally adopted e-commerce, but do they also need rental, resale and subscription businesses to stay current?

Do merchants today have to have it all?

Maybe, maybe not — but many of fashion’s biggest players seem intent on at least trying it all, playing a kind of business model bingo.

Fifteen years ago, there was debate over whether or not stores needed e-commerce sites — that argument has been decided, definitely, with a combination of clicks and bricks coming out on top.

With new avenues to the consumer opening up, no one seems to want to wait too long before jumping in or at least testing the waters.

For brands that resonate deeply with the consumer, tapping into more ways to shop could be more of an opportunity than a threat.

“It’s definitely a dynamic that’s out there,” Chip Bergh, president and chief executive officer of Levi Strauss & Co., told WWD. “We’re the number-one brand in consignment and thrift shops around the world. We sell authorized vintage product in our stores. We’re looking at a program with some of the online thrift-type of brands.

“It plays to our strength as a brand,” Bergh said. “We are slow fashion, we’re the opposite of fast fashion. We’re a product that really never goes out of style.”

For a brand like Levi’s, which has a broad base and has cultivated different models of distribution already, moving from a primarily wholesale stance to a wholesale and direct-to-consumer hybrid might be a natural evolution.

But many other brands are cautious about branching out.

“It’s important to stay focused and not try to be everything,” said Robert Burke, chairman and ceo of Robert Burke Associates. “You can’t try to cast such a wide net. Brands are focused specifically on their own retail, direct to consumer, whether that be physical or e-commerce. You can’t be everything to everyone and I think the customer gets a little confused.”

Some designer businesses have tested new concepts with a partner — for instance with Burberry and Stella McCartney partnering with The RealReal, but most are still on the sidelines — watching intently. 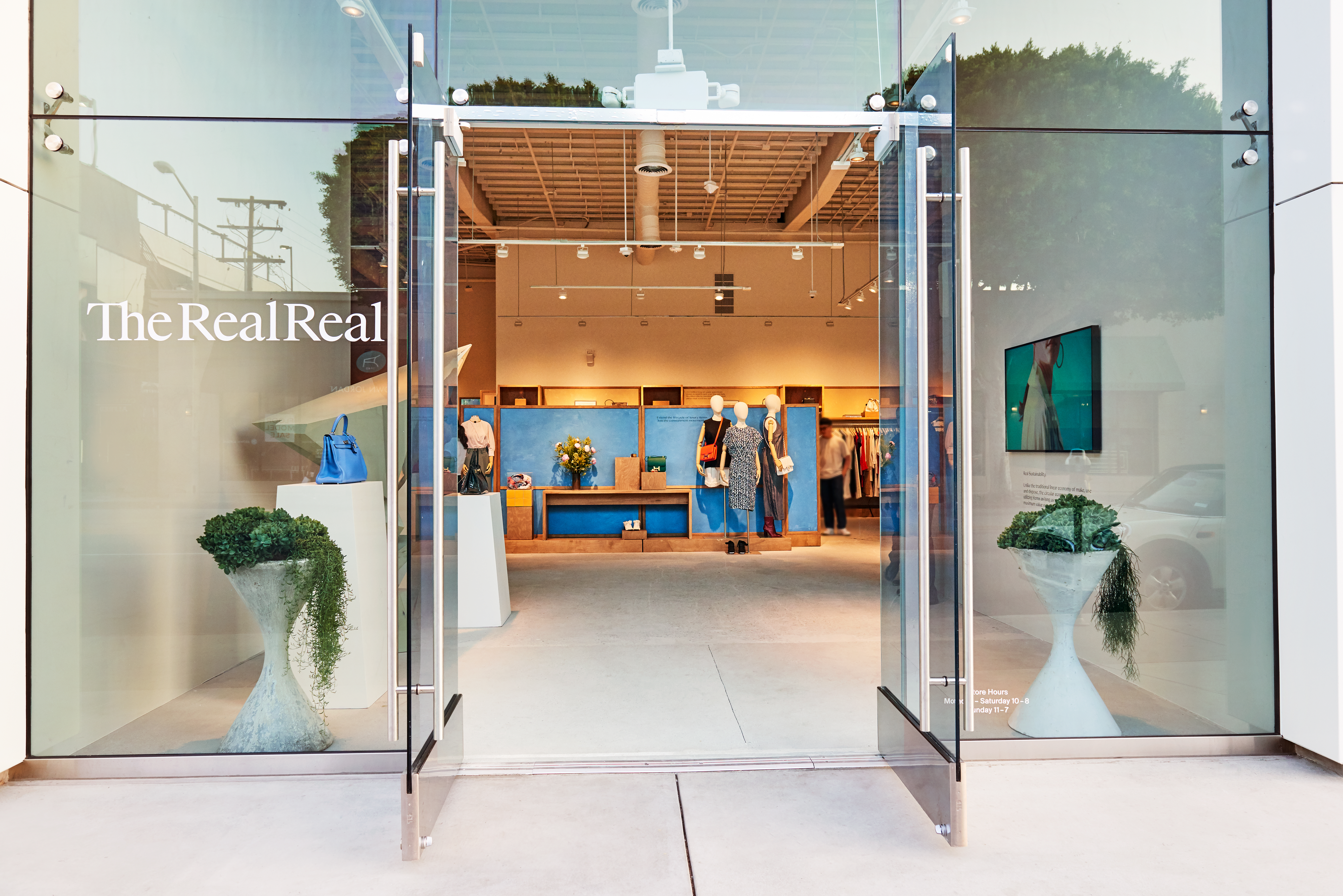 It seems to be different for multibrand retailers who look at the business models and see competitors rising. Having generally been too slow to adapt to Amazon and the world of e-commerce, the brick-and-mortar crowd is rushing ahead trying to get the lay of the land before ThredUp, Rent the Runway or Stitch Fix Inc. become the next Amazon.

Macy’s has perhaps been the most aggressive in its expansion. In addition to Thredup at Macy’s, it has a rental service at Bloomingdale’s that could bring its namesake chain into rental as well. The company also bought Story, an experiential concept that’s brought new flavor to its stores.

Under Jeff Gennette, chairman and ceo, Macy’s is growing more comfortable becoming a collection of business models rather than strictly a department store.

“We’re very open to that,” Gennette said when ThredUp was added for the back-to-school season. “We’ve got very smart teams that are working on this intently. We test, we iterate. We do all those things thoughtfully, but the Macy’s brand is taking on a new strength. We are going to move into new territory based on where the consumer takes us.” 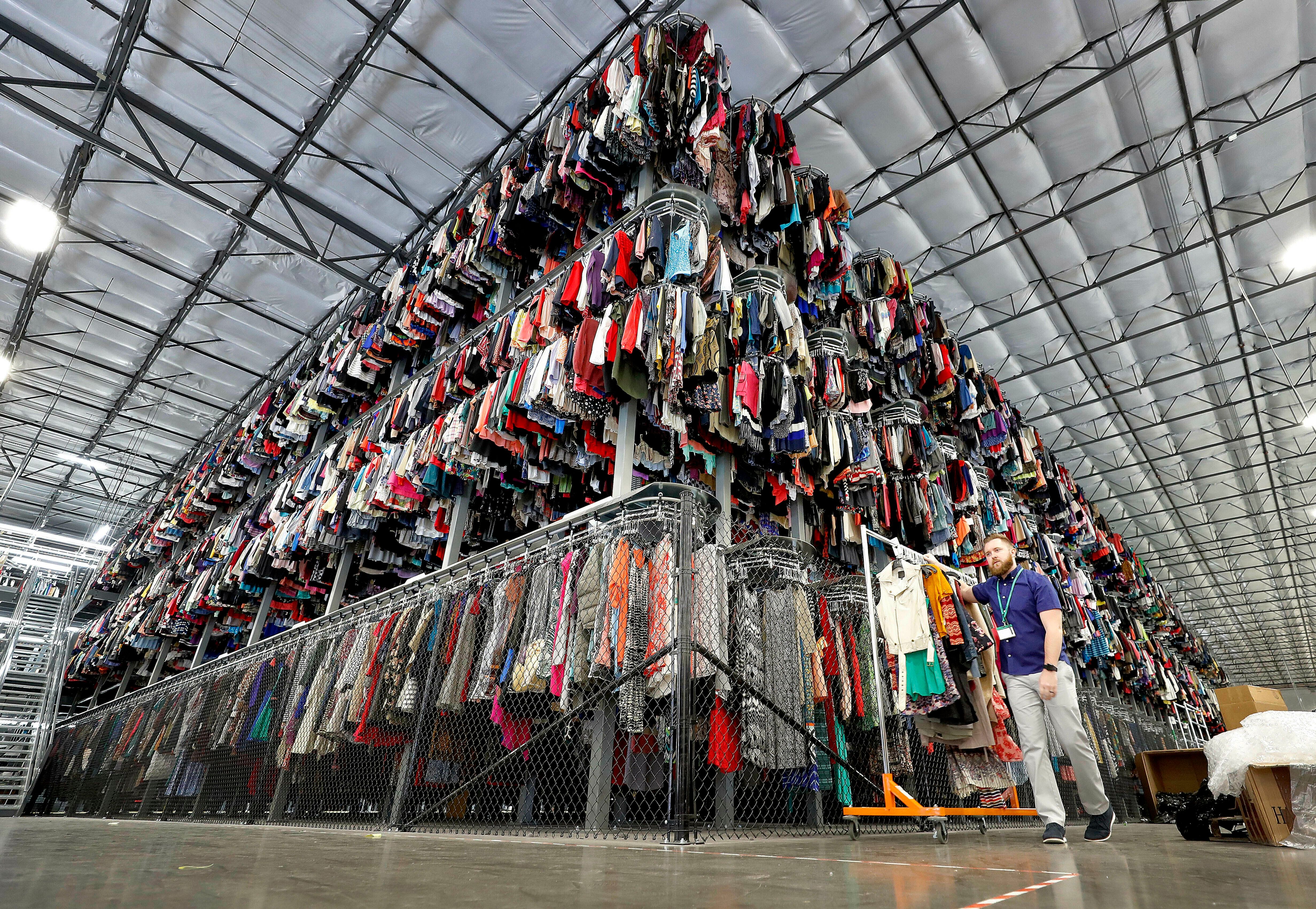 Thousands of garments are stored on a three-tiered conveyor system at the ThredUp sorting facility in Phoenix.  Matt York/AP/Shutterstock

That makes almost everyone working in fashion a pioneer, whether they like it not.

“There’s continual pressure on more traditional retailers and they’re looking to see where they can actually win,” said Sonia Lapinsky, a managing director in the retail practice at AlixPartners, pointing to the Amazon effect, slowing foot traffic in stores and other headwinds.

But there’s potentially a big problem for the brick-and-mortar crowd if they try to chase a new consumer with a new business model and go in with half-measures while the disruptors are all-in.

“It’s a highly risky way to go,” said Lapinsky, noting a concept like resale is complex to execute and has its own supply chain and distribution needs. “There are new skill sets [needed] that aren’t in the usual retail sphere.”

If a retailer really wanted to go after one of the new distribution models, she said they’d have to figure out their strategy and “put real energy behind it,” remaking their operations and their infrastructure.

Instead, she suggested that the brick-and-mortar crowd “take a step back and look at their entire business.”

“How do they rightsize the business for where it is today and where do they invest to grow?” she said. “That’s why we’re seeing so many store closures. There’s going to be much more of that. Do they have the right attention on that side? On rightsizing the business?”

Ike Boruchow, an analyst at Wells Fargo, agreed that resale and rental are here to stay, fed by the growing desire to have a smaller ecological footprint.

“The idea of sustainability is a real thing,” Boruchow said. “It does drive behavior and as we look forward that’s what we want, we want less physical inventory in your closet and we want to feel better about what we’re doing for the environment.”

But he said he doesn’t expect a single-brand business to create a rental operation of any real scale. And while multibrand businesses have more potential to scale, they still need their own platform and a differentiated brand — like Rent the Runway — to really make it work. 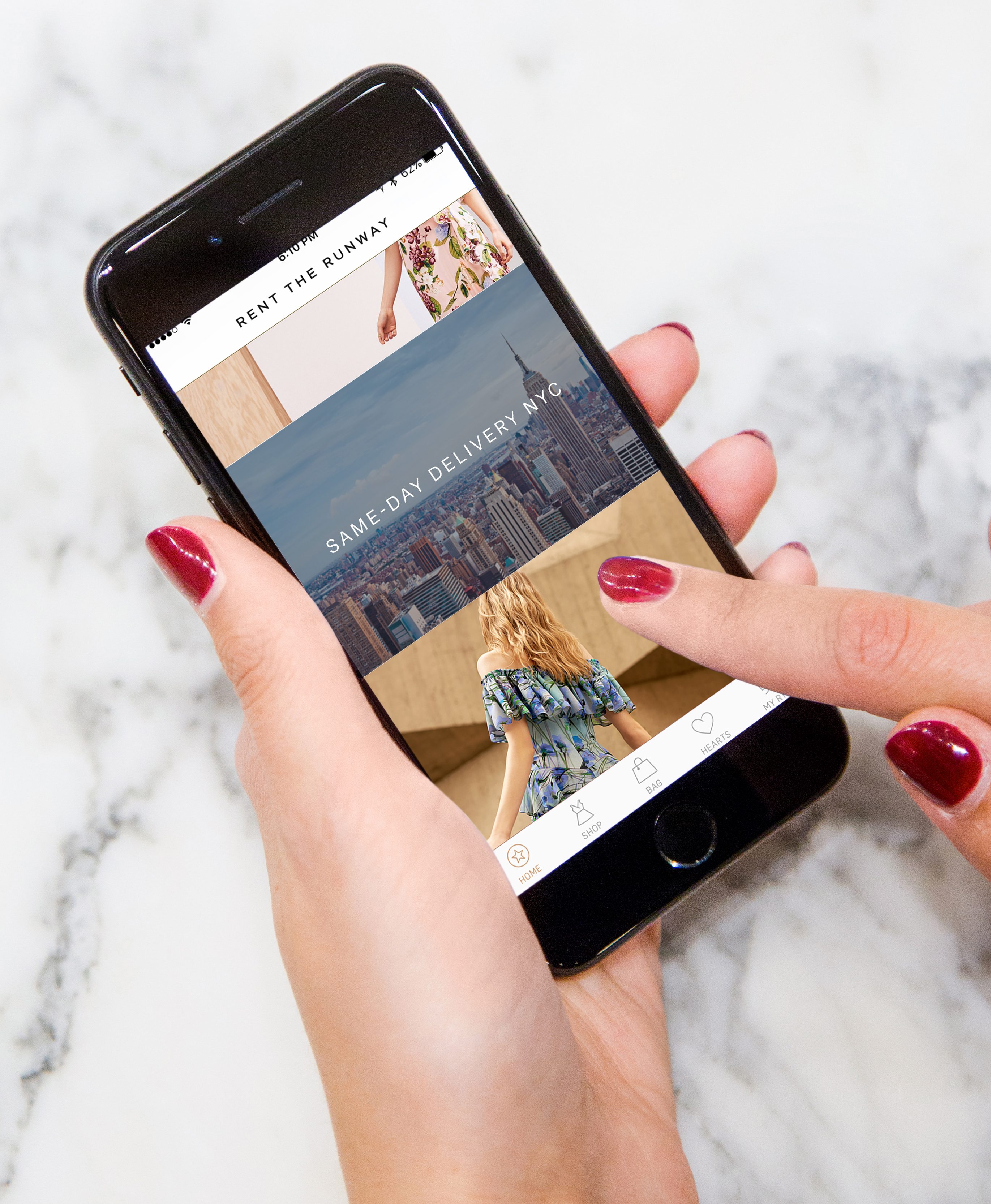 The Rent the Runway app for same-day delivery in New York City.  Courtesy

The lower-hanging fruit for retailers is to boost their e-commerce businesses.

Boruchow said the average apparel and footwear penetration at e-commerce was 22 percent last year. Some retailers are above that — he pointed to Urban Outfitters Inc. (with 40 percent of its business online), Lululemon Athletica Inc. (26 percent) and Victoria’s Secret (23 percent). But there are also plenty that come in just at or below the average, including Gap Inc. (22 percent) and Foot Locker Inc. and Dick’s Sporting Goods Inc. (both at 15 percent).

“Even if a company’s at 22 percent today, you can’t rest on your laurels because in five years, that number might be 30 percent,” Boruchow said. “If I’m these companies, I really want to focus my capital and my time and effort on my store base and my e-commerce business in terms of what I want that to turn into. Everybody has web sites, but some companies do a much better job.”

That leaves the retailers somewhere betwixt and between in 2019.

The world is changing and — finally — they want to change with it to test and iterate and be techie and all the rest of it. But as they try, they’re advised to focus on what they know to strengthen the core.

Once upon a time, Macy’s or any number of retailers had the resources to stomp out Amazon and grab control of e-commerce, but for whatever reason, they didn’t.

Now they sense the world could be changing again and many seem to want to keep their options open.